Jesús and the Attempted Exodus: A U.S. Border Tragedy

(Sometimes fiction helps us see past our blind spots and get to the heart of a matter. I don’t typically write fiction, but this time I felt like it was calling for it. Much has been written about the humanitarian and even biblical call to care for the children at the U.S/Mexican border – even the Pope has helped give us perspective [#popecrush #on]. I wanted to humanize the story in order to get at the realities beneath it without predefining sides. The following is a work of short fiction, not a short blog post. Any similarities to living people is unintended.)

Jesús was a special kid.

He always had been.

People were talking about him before he was born. He never quite understood the fuss, but folks said his mom wasn’t supposed to be able to have children. While growing up in Honduras, María had a life altering run in with a local gang. The way the old-timers tell it, it was a miracle she was alive at all.

Now-a-days, he just tried not to think about her too much. A few years ago his Dad, José, was gunned down. He was just standing on a corner – just standing there. And, bang. Jesús’ father was gone. Gone.

About a year ago, late one night, there was a brief knock on the door. María had painted the edges of the door in red just as she had been instructed. It was time. For her, this was a once in a lifetime opportunity. There was never a guarantee you’d be selected. This was the one chance for her and her boy to live.

In their neighborhood, people lost their lives everyday. Sooner or later, it would be them. She had to get them out.

As it turns out, this night, only one of them would leave.

After the hard rap on the door, a voice gruffly whispered, “I can take one more person. We must go. Now.”

Jesús had slept through much of the commotion. He awoke to his mom saying that she was going to have to go because he didn’t know how to get to their cousin Juan’s house in San Diego.

She cupped the cheeks of his face in the shaking palms of her hands, “Jesús. Look at me.” As their eyes strained to focused through the darkness she said, “Go to your uncle’s house, quickly. Zahariah and Isabel will take care of you until I can come for you.”

The next two years where much better than Jesús could have imagined them to be as he journeyed that cold, dark night to his aunt and uncle’s house with nothing but the clothes he slept in. Zahariah and Isabel were wonderfully loving people. They were devout Catholics which meant Jesús spent a lot of his time reading scripture.

He was a good student. He actually liked it. Focusing on the words – memorizing them – and the “Good News” helped take his mind off of missing his parents, and off of the fact that after two years, he’d not heard one word from his mother.

Then one night, the real nightmare began. His aunt and uncle did not return home. They were usually there like clockwork, gathering in the kitchen at 5:30, making tamales, and asking him about what he’d learned that day. It almost felt normal.

This night was the beginning of the end of normal. This night began his exodus.

It’s hard to say what exactly happened. The town was in chaos. Engines roared. Houses were ablaze. From time to time, random gunfire would echo against the backdrop of mass panic.

At first he hid, balled up in a dark corner of the house. The fear was in charge. It shut him down.

There in the dark, cloaked in midnight and fear, at the age of twelve, Jesús aged a lifetime.

And that is how he began the journey that brought him to the U.S. border. It’d been a dangerous forty-some days. He’d gone hungry most of the way, but he’d made it.

What choice did he have? This was all he knew. This was the way to his mother. This was the only path to life. Behind him there was only evil and in front of him? Well, he trusted that God had plans for him – plans for hope and a future. He’d held tight to that verse. He had to.

Jesús cleared the Rio with less trouble than he anticipated. Sopping with water, he made his way up the embankment. He’d been told to find the la migra, the Boarder Patrol. They will help you.

Within a few hundred yards, he spotted an approaching light in the darkness of the night. La migra!, he thought. Even in his exhaustion, he began waving. The light moved more rapidly toward him.

He reached out and grabbed the man’s arm for support. That is when he saw the cross. Tattooed across the man’s forearm was a cross like the ones that hung in his uncle’s home.

“My help cometh from the LORD, which made heaven and earth.” He blurted it out in the little English he had learned from the King James Bible that had been prized by his aunt and uncle.

With that came a hard blow across his back. He could feel the curve of the flashlight’s handle snap across the bones of his upper shoulder. The next blow was to the base of his neck and it caused his legs to buckle. A knee across his right cheek and the bridge of his nose sent him to the ground.

“Damned immigrants. You think you can just show up and everything’s gonna be alright?”

“If thou sayest,” mumbled Jesús in a daze as he fell to his back.

The next blow was across his chin. As the blow was landing he caught glimpses of red and blue lights bouncing off the bushes around him. The man with the cross looked worried and surprised.

La migra!, thought Jesús and then the night went black.

He awoke in a cage. A very clean cage, but a cage none-the-less. He knew he’d been out for awhile: His face was partially caked with dried blood. As he cracked pieces off to clear his nose, he began whispering to himself in comfort, “Take therefore no thought for the morrow: for the morrow shall take thought for the things of itself. Sufficient unto the day is the evil thereof.”

“Sufficient unto the day.” He repeated it over and over again. Focus on the here and now. Survive this.

The door swung open. A man in uniform slowly crouched over and gently helped Jesús up. Jesús tried to smile but there was too much pain.

His eyes cut from the officer’s face to the gap between him and the door, and he considered making a break for the back door. As he measured out the distance, three more armed officers filled in the space as they went about their duties and quickly subdued his instinct to run.

Gathering his composure, he realized that he wasn’t the only kid there. There were actually a lot of others about his age.

They were all being lined up and filed into buses.

As the buses bounced down the highway, Jesús had no idea where they were going, but it was north. As far as he was concerned, that was good. For the first time in days, he rested.

The bus had stopped, but it was rocking. That is not something you want to wake up to. Jesús couldn’t tell if it was the crowd outside or the panicking kids inside that were causing the bus to sway back and forth as if it were at sea, but he was done with it.

He stood with his feet on top of the seat’s armrest, his head nearly touching the ceiling and yelled, “Why are you fearful?!?”

The other children silenced. The bus stilled.

That’s when Jesús heard the chanting outside.

Americans! Gathered with flags and cheering! He never imagined this would happen. It was beautiful. A foreigner in a foreign land being embraced by the people of God!

“Suffer little children, and forbid them not, to come unto me: for of such is the kingdom of heaven.” The words from his aunt and uncle’s Bible echoed in his head as if to underscore the immense irony and disappointment of this nightmare.

He caught the eye of the driver who seemed just as bewildered as the other kids were. He seemed almost apologetic. With surprising calm, Jesús said, “Blessed are ye, when men shall revile you, and persecute you, and shall say all manner of evil against you falsely, for my sake.”

He’d worked so hard for so long to hold it together. He couldn’t remember crying since the night his mother left. Somehow, when that bus driver became misty eyed, it overwhelmed him and the years of deep sadness broke loose.

He had needed to for awhile. The grief, the loss, the disillusionment that he felt were soul shattering.

In that grief, he made a mistake. It was a mistake that he’d pay for with his life. Had he known this mistake would have saved so many, he would have made the same choice over and over again.

In a moment of deep grief, he thought he saw his mother in the crowd.

Jesús pushed his way to the front of the bus, barreled through the crack in the almost closed door and ran.

A shot rang out from the front of the angry crowd – one crack of a gun.

María watched as her child collapsed face first into the asphalt.

She was there every time the busses dropped off children at the Border Patrol processing station. She had always believed God would bring her child back to her.

She rushed to hold Jesús in her arms.

In that moment, in his death, in front of their eyes, the children became real to the chanting crowd. In the love of a mother poured out over her son, her one and only son, they began to see through the myths they had been lead into. In her cries they heard the anguish of their own lives. With her tears they wept their own.

Love won the day. The crowd parted. The buses moved forward. The children all finally escaped the hell from which they were running. 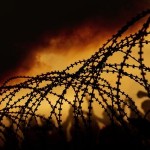