The Party Switch (and PragerU)

I had not been aware of who PragerU were. It amazes me how insidious the disseminators of supposed information are, particularly in the US. For those who don’t know, PragerU (Prager University) is not a university but an online “educator” funded by right-wing, conservative organisations and groups. As Wiki describes:

PragerU, short for Prager University, is an American non-profit organization that creates videos on various political, economic and philosophical topics from a conservative or right-wing[1] perspective. The videos are posted on YouTubeand usually feature a speaker who lectures for about five minutes.[2]

PragerU is not a university, nor is it an academic institution. It does not hold classes, and does not grant certifications or diplomas and is not accredited by any recognized body.[3]

PragerU was founded in 2009 by conservative radio talk show host Dennis Prager and radio producer and screenwriter Allen Estrin,[4] in order to present conservative views and to offset what Prager regards as the undermining of college education by the left.[2][5] PragerU is based in the San Fernando Valley and had more than 20 employees as of March 2018.[6]

Since a lawsuit over the use of a photograph in 2013, PragerU has used animation in its videos.[7] As of November 2018, its YouTube channel includes 482 videos.[8]The organization depends on donations. According to its CEO, Marissa Streit, a group of approximately 500 students, “PragerFORCE”, promotes its videos.[5] PragerU reached a billion views in 2018.[6]

On October 23, 2017, PragerU filed a federal lawsuit against Google, claiming that 37 of its videos on YouTube were unfairly demonetized or flagged so that they could only be viewed with restricted mode disabled.[9] The restricted mode filter “limits views based on certain characteristics, including the age of the viewer”.[9] On March 26, 2018, the case was dismissed by U.S. District Court Judge Lucy Koh, who ruled that because Google was a private company, PragerU had failed to show that it had infringed its free speech rights.[10][11]

In August 2018, when asked to comment, PragerU criticized YouTube for adding fact-checks to YouTube videos which cover climate change.[12] Also in August 2018, Facebook removed two PragerU videos from its platform, later restoring the videos, saying that they “were mistakenly removed”.[1][13]

The rest of the wiki page is well worth reading. A pertinent paragraph concerns the PragerU video to which the below one is a criticism:

In a video entitled, “Why Did the Democratic South Become Republican?”, host Carol M. Swain, a professor at Vanderbilt University, argued that the Southern strategy–the Republican Party’s strategy of purposely exploiting racial tensions in the late 1960s to appeal to racist white Southerners–was false revisionism. Kevin M. Kruse, a professor of history at Princeton University, said that the video presented a “distortion” of history, “cherry-picked” its evidence, and was an “exercise in attacking a straw man“.[17]

Thi video was put onto me by a friend on facebook and gives a really good account of how the Democrats and Republicans switched positions on ideology and policy regarding race. Give it a good watch. 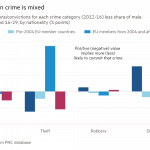 August 6, 2019 The Recent Shootings and God
Recent Comments
0 | Leave a Comment
Browse Our Archives
get the latest from
A Tippling Philosopher
Sign up for our newsletter
POPULAR AT PATHEOS Nonreligious
1

Leviticus and Homosexuality - Part 1: Outline of...
Recently, I posted a meme on my personal FaceBook page that challenged...