A Letter To A Fellow Skeptic And Listener Feedback (Is This Thing On?) 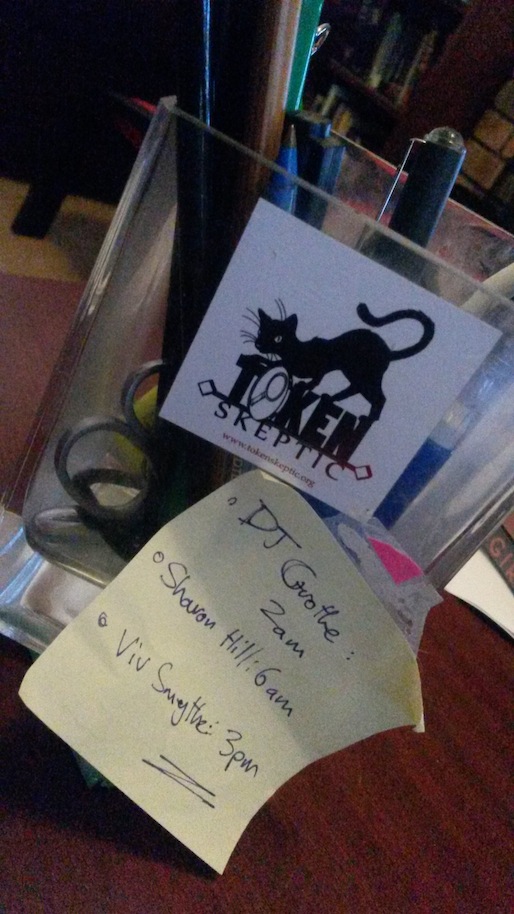 So, I’ve had about [Insert Far Too Little Healthy Hours Here] of sleep and I’m firing through a load of audio to clean it up and post it out to promote all kinds of cool, awesome, hard-working and dedicated people…

…who are more than likely also putting their health on the line to promote a broader understanding of science by the public, to educate and inform the world. In far more effective ways than I do.

And then I realise that no matter what I do, whether it be taking on the onus of posting a link about my podcast work to groups I’ve hesitated over in the past…

(It’s a typical Catch 22 – if you “promote” your work? You can be painted as arrogant and attention-seeking, and deserve to have your work ignored or cut off like the head of a poppy, a particularly sad cultural practice that some in my country in particular seem to take pride in doing. If you don’t? You risk wasting the efforts of the people you interviewed and the message they have, or the issues that matter, and fail to promote positive contributions to what is now unfortunately a tumultuous milieu for skeptics, rationalists, atheists and so on.

There’s no half-way point – you either promote or fade away. You have to accept that advertising is a reality for practically every venture, particularly when it comes to those claims you need to advertise against when they have so much more budget, time, human resources in comparison… or let your work and that of hundreds of others go to waste.)

…but there’s always something that isn’t going to go perfectly.

I hope that these shows get to a great listening audience, but I know that it’s not without help. And I know that no one is perfect when it comes to pleasing everyone or getting everyone on side. I’ll knee-jerk react to avoid stuff the same way anyone does, before you can even say “BlockButt”.

Woe is me for doing something I enjoy doing, right? Boo-bloody-hoo.

But I learned recently that there was at least one other person involved in skepticism and atheism (sometimes they overlap) – who had the same doubts about continuing to do something they enjoy, so I thought I’d blog.

This topic been on my mind recently, for two reasons:

Is This Thing On? (Why Audio Never Goes Viral) by Stan Alcorn:

By letting everyone become broadcasters (or really “podcasters”), it was supposed to disrupt radio in a way that was predicted to parallel that other online media format with a horrible portmanteau name: blogging. In fact, the name “podcast” was tossed off by the Guardian’s Ben Hammersley between the alternatives “audioblogging” and “GuerillaMedia.”

It wasn’t all hype. Anyone can start a podcast, just as anyone can blog…But while much of online publishing now takes the form of the blog, interest in podcasting seems to have flatlined. According to Nielsen Audio (formerly Arbitron), 12% of Americans listened to a podcast in the last month, the same percentage as three years ago. It is a substantial niche, but smaller than the percentage of people who create online videos, and less than a sixth the number who watch them.

I chose to work in a medium that just isn’t as whizz-bang as other formats – work that led me to go back to school in order to learn to edit with different software.

The viral industry can help solve audio’s skimming problem, but only if it can find the content in the first place. “Radio doesn’t do a very good job of marketing itself to the viral industry, for whatever reason,” says Zimmerman. “Maybe it thinks too highly of itself, or thinks of ‘viral’ as a cheapening of its content. I really disagree with that. I think there’s a lot there to be mined, and a lot that gets ignored.”

“Marketing” makes it sound like radio makers simply need to do a better job of drawing attention to their work. And it’s true: active, public sharing directed at non-audiophiles is how Zimmerman found “Two Little Girls.”…

…But Jeff Cohen and “Fletch & Vaughan” demonstrate that audio makers don’t have to wait for a deep shift in technology to court a viral audience. They would, however, have to create audio not for already-dedicated radio and podcast listeners, but for the distracted, impatient crowd that is the web. Audio enthusiasts would have to evangelize on that work’s behalf, not just in coffee shops or emails to each other, but online, loudly, with the same manipulative, click-chasing techniques wielded by the rest of the web.

My emphasis in bold.

But there’s plenty of different factors that contribute beyond not being able to evangelize effectively, which make it difficult – which certainly doesn’t exclude my getting prickly online on occasion with people who don’t see me awake at 3am editing. While enjoying it. Kind of.

By the way, the sticky note in the photo is absolutely true – I kept it as a reminder as to what podcasting is like, whenever I think I don’t do enough for “the cause” (which is often).

I also wrote two very lengthy emails to a fellow skeptic, who seemed rather bereft about the same said milieu and here’s an edited version of it. I hope one of them helps you out the way it did them, if you’ve ever felt the same way.

How do I know if I have listeners? How do I get feedback?

Unfortunately it gives the impression that there isn’t much in terms of Token Skeptic listeners / interaction to the casual observer if it’s mostly private emails – in comparison to (say) a forum board or Google mailing list or a lively website with a community within the comments section who then meet up at events or whatever.

I get “+” on the occasional Google+ post, but it’s really difficult to narrow down anything beyond a “people seem to like this”. Shares of the show (often I find these long after they’ve been done); the reviews on a site like SkepReview appear now and then, but they’re still greatly valued. I stopped looking at iTunes ratings, after seeing another podcast get treated as if they were akin to YouTube comments.

However, in saying all of that – it was mostly the German fanbase for the show that got my podcast into the finals of the Ockham awards (the judges did the final call, so it wasn’t just popularity votes; I really, really don’t like ‘Pharyngulated’ results or awards based on clicks rather than external experts making the final call!). That was some very good feedback in terms of “you’re not doing as badly as you thought”!

The German fanbase came from going to the Berlin conference and interacting with folk there, and doing support for their shows and projects in return. One recent ep was created when I was in the doldrums of final assessments and over-worked-stress; some audio came from a fantastic German podcaster, who gave me his interview on an American band so it would reach a wider audience via my show.

If it wasn’t for that show, and other friends, I would have probably lost a lot of impetus to continue that month and probably even more. And all of THAT was in the year I won a podcast award and was a runner-up for another big podcast award – so it goes to show that external validation via awards really aren’t as big a push as you might think they are. It was my friends who mattered more during that tough time.

The “we have X – we don’t need anything else similar / that could be competition/ it ain’t broke why fix it or why play around with the familiar format” is a common thread when it comes to new skeptical ventures, and I remember asking Dr Novella onstage (it’s in fact in the podcast of the panel) on how to, say, be as popular as some shows – and his response was “get started in 2006“.

I’ve seen a lot of “reinventing the wheel” and good ideas and great projects just die on the vine over many years, because people really, really depend on feedback and hits and compare themselves to the “popular kids'” hits and donations, and wait in vain for validation from a few “key” figures in the community – rather than doing it because they primarily enjoy it / haven’t allowed it to exhaust them. I’m just as guilty as letting that happen to me as anyone else.

Negative feedback, jealousy, misinterpreted-as-competitiveness and in-group endorsed hatred over what is often just luck, or good networking and hard (unseen to the general public) work is not uncommon too, and I’ve experienced that pretty much ever since I’ve started any project ever.

I particularly remember experiencing it after winning a dance competition back in Grade 4. Nothing changes. Except that I don’t dance to anything from the soundtrack of “Footloose” anymore. You’d think everyone would have grown thicker skin by now, but nah.

So there’s also that flip-side of “not hearing much from good OR terrible people isn’t so bad after all“. No news is good news?

In that way, audience feedback can be bad, as lack of it or bad feedback can distract from doing something you intrinsically value for what it gives to others and yourself. Good feedback could lead to complacency. I don’t think there’s ever a happy medium.

And that’s it. I probably annoy people – in fact, I’m sure I do.

I probably have people who will always listen to the show who don’t find me annoying. Or maybe they just like my guests way better than me and fast forward through my voice.

But in the end, it’s the show that matters and the content produced. It’s not perfect, but neither am I. Oh, god, am I not sodding perfect.

But neither are you. And I hope the show continues to improve, even if everything else has problems. You don’t have to say anything about it if you really don’t want to. I honestly don’t mind so much anymore.

But I really do appreciate it if you help. It makes being awake at 2am, 6am and 3pm on the same day for interviews a lot easier. Even though I enjoy it, as I said.

I have to get back to work.