“Movies have gotten so bad!” People sometimes tell me. “The sex! The violence! The swearing!” And in a lot of respects, they’ve got a point. The Hays Code (which essentially required that all films be fit for “general audiences”) is long gone. Putting problematic content is often incentivized in our crowded entertainment culture, too: Pushing out the “bloodiest” or “sexiest” or “most shocking” flick in a given genre is a way to stand out from the crowd. Little wonder so many moviemakers push the proverbial envelope.

But while movies have gotten “worse” in some respects, they’ve also gotten better. Case in point: Dumbo.

I admit that my memories of Disney’s 1941 classic are a bit hazy. But that’s because the movie scarred me so much as a kid that I’ve never wanted to re-watch it as an adult. But from what I recall, seems like Dumbo was relentlessly bullied, got some advice from some racially stereotyped crows and got drunk—sparking perhaps the most psychedelic scene in Disney history (and that’s saying something). And the scene where Dumbo says goodbye to his mother? Ugh. Bambi can’t hold a candle to how sad I felt watching that.

It has a happy ending, of course … if a flying elephant wreaking painful revenge on everyone who mistreated him counts as “happy.” There’s a little bit of Death Wish in Dumbo.

The PG live-action version looks sweeter than the G-rated original. Nicer. More wholesome. Take a look at the clip and see what I mean.

Will the new movie (coming out March 29) be any good? Who knows? Disney’s track record with these live-action reboots has been pretty good so far, but there’s always risk of a stumble. But good or no, the new film suggests a sense of redemption that I don’t remember from the first. It seems to focus on Dumbo soaring above his doubters, not dive-bombing them and pelting them with peanuts. And as far as I’m concerned, that’s an improvement. 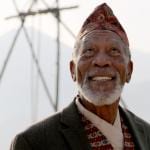 March 3, 2019
‘I’m Just Fascinated by It.’ Morgan Freeman Talks About Religion, Faith and ‘The Story of God’
Next Post 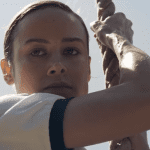 March 8, 2019 Captain Marvel Isn’t a Great Movie. But it has a Great Message
Recent Comments
0 | Leave a Comment
"Thanks, BrowserPhil ... so embarrassing. Aravis was from The Horse and His Boy, right?"
Paul Asay Narnia Comes to ‘The Falcon and ..."
"Please replace Aravis with Jadis. :-)"
BrowserPhil Narnia Comes to ‘The Falcon and ..."
"I know that the first film on this list not explicitly about Christian faith, Denis ..."
Robert Charles The 12 Best Non-Christian Christian Movies ..."
"The author, starts the article with a dismissive/arrogant affirmation unto all that are worthy to ..."
oscar deltoro ‘I’m Just Fascinated by It.’ Morgan ..."
Browse Our Archives
get the latest from
Watching God
Sign up for our newsletter
POPULAR AT PATHEOS Entertainment
1