Why Do Hindus Not Eat Beef [Google Questions Answered]

Another search engine question that I found is:

I’ve addressed this a little bit here and there, but always as part of a larger post. Today I’m just going to talk about beef and cows…

Growing up in America, beef is every where. For some Americans, it’s part of every dinner. It is the thing our diets are most based on. Without meat, and often specifically beef, it’s not a meal.

I think to many Americans not eating cow seems arbitrary. Certainly some Hindus are fully vegetarian but many others eat some meats but not beef. How strange, the American thinks, how could it be okay to eat chicken but not cow?

For Hindus who grow up in America, not eating beef or stopping eating beef can be an enormous challenge. Beef eating is all around us and if we don’t eat it, we are viewed as extremely strange and forced to explain it every time. It can get pretty exhausting.

My understanding is (and please correct me if I’m wrong) that Hindus growing up in India have a very different perception of the cow. It is simply not a meat animal. How could that be? Well, my American peers, think about the stories of some cultures eating dogs. Is it true? I have no idea. But I know that shocking rumors go around from time to time about how in some countries you might accidentally eat dog meat.

Why are they shocking? Because to us, a dog is not a food animal. It occupies a different position in our brains than those animals we would eat. A dog is not for eating.

To Hindus, the cow is the same way. It is not an animal for eating.

There are other reasons why a Hindu might also be a vegetarian. One reason is that one of the important principles of Hinduism (and several of the other Indian religions) is ahimsa, the principle of non-harm. Hindus try to minimize the harm that they do to anyone or anything. (Did you know that in strict Jainism food cannot be plucked from trees or pulled from the ground to minimize harm to plants? Traditionally Jains do not eat root vegetables and fruits must have already fallen from the tree).

Another reason is the belief that when you take the meat into your body, that meat is infused with the emotions of the animals and that you are also taking in the pain and fear connected with how that animal died.

As you have probably heard, cows are revered in India. Some say it is because Krishna was a cow herder and so it is an animal special to him. Others will say it is because the cow is a great symbol for selfless giving. She provides us with milk, cheese, yogurt, etc.

In practice, I think cows wandering the street may be just one more pest. For some, anyway. When I was in India, I mostly saw people swatting cows away in annoyance!

During Diwali there is a day (Dhanteras) when, in some regions, cows are decorated and pujas are performed to them. 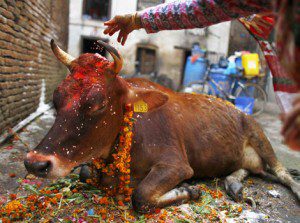 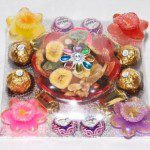 November 26, 2013
Puja Help From A Surprising Source!
Next Post 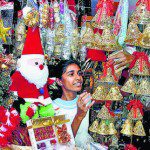 December 2, 2013 Hindus and Christmas
Recent Comments
31 Comments | Leave a Comment
Browse Our Archives
get the latest from
Hindu
Sign up for our newsletter
POPULAR AT PATHEOS Hindu
1