I get email: John Harrington’s 15 minutes of fame. 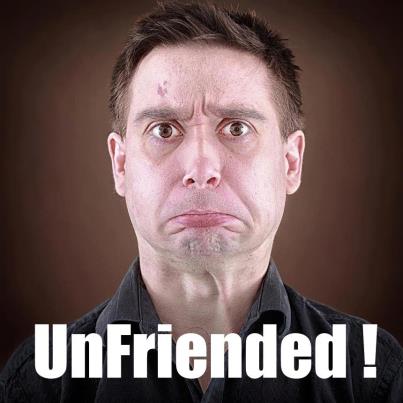 The other day I posted a silly question and invited people to destroy it.  The person who posed the question then sent me this message.

I understand what you’re saying JT. I wasn’t going to pull the inscrutable thing though. I honestly was clarifying and maybe i could have phrased it better or PMed you. Sorry to come off as trollish. I’ll try to do better.

I appreciate reading your posts and being challenged by what you say. Being challenged is really the only way I can think.  Of course, the less I think, the more GW2 I can play….heh heh heh

Ok, cool beans.  I get a lot of questions from Christians who aren’t looking for a real answer, but are instead trying, feebly, to create a tie-down to begin a one-way conversation.  I get several of these every day, and so it was easy to lump this guy in with them.  Plus, I was pretty stressed yesterday.  Ninety-nine times out of a hundred the person who asked that question is looking to assert that when god’s supposed will and compassion are in opposition that we should betray humanity.  I have no qualms calling the lack of forethought in those people stupid.  It is.  But then there are those annoying one percenters… (What Ed Brayton says here pretty much sums up my position)

But now let’s talk about an atheist who messaged me.  A guy named John Harrington commented on the link to the stupid question post upset that I would call that question stupid.  I got the usual charges of arrogance, along with the charge of mild atheist celebrity.  w00t!  When do I get my hot tub and honorary loft in PZ Myers’ lair?

The dude was pretty upset that I could be so rude and punctuated it with “Fuck you, you piece of shit.”  So I defriended him.  Something about not wanting friends who call me a piece of shit.  The following dialogue ensued. 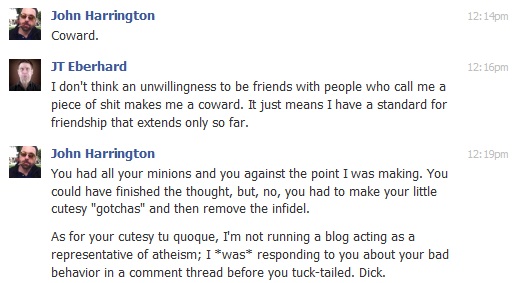 Oh dear.  Well, I don’t want to be a coward.  So here you go, John.  I’m not a coward!  I’m going to post your whole bit to the internet, regardless of how bad it makes me look. 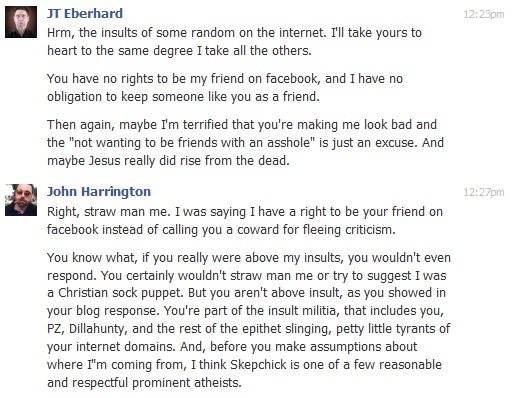 The guy puts me on the same plane as PZ Myers and Matt Dillahunty and he expects me to feel bad?

And I don’t think he’s a Christian sock puppet and never even hinted at that.  Sadly, religion doesn’t exclusively own the deeds to hypocrisy, and not all atheists are reasonable.  So I have no trouble believing that John is an atheist.

At least he likes Skepchick. Good on him for that. 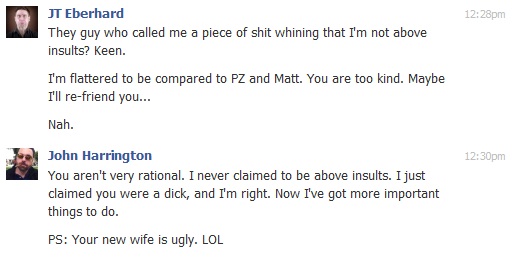 The guy was upset because I’m part of an “epithet-slinging group of internet tyrants” and he chastises me for not being above insults, then calls my fiancee ugly.  This is the type of irony that would allow the a child-raping priest preaching about morality to live in its shade.

Note how I never went after the self-worth of the Christian who asked me the original question.  I said his question was stupid and insincere (and almost every time I would’ve been right about the insincere part, and I still think the question was lame).  It’s the kindness police (read: John Harrington), not me, calling other people a piece of shit and making negative assessments of those I care about in attempt only to hurt.  And he thinks I’m part of the “insult militia”.

Skepchick‘s got a real winner in this fan.  After demonstrating how an atheist can handle himself in a respectable way (and by causing me to expose my previously private humiliation at the hand of John Harrington to the world), I’ll bet all the atheist groups in San Diego can’t wait to pick this guy up.

So anyway, John.  Here’s your 15 minutes of atheist celebrity so you can show us how a real atheist should conduct himself.  I used to think I was doing you a favor by keeping this thread relegated to private messages, but now I realize it’s because I was a coward, just like you said.  Thank you for helping me to be brave.

I’m closing down comments on this thread. It has devolved into John Harrington just insulting people.  The thread has accomplished what I wanted it to. Now, any atheist group John Harrington ever wants to be a part of, if they look into him, will see this post and the know type of person he is.  Unlike the Catholic Church, we police our own.  At least, that’s my hope.

He’ll also be banned from the blog so he cannot derail any other threads.

February 21, 2013
How could you ever think the GOP is racist?
Next Post

February 21, 2013 Pre-marital sex laws in Virginia and the GOP.
Browse Our Archives
get the latest from
Nonreligious
Sign up for our newsletter
POPULAR AT PATHEOS Nonreligious
1

Marjorie Taylor Greene Pushes Anti-Witchcraft Law
Laughing in Disbelief
Related posts from What Would JT Do?

Op-ed: Oh, how they laughed when Ted Cruz...
A winter storm with below freezing temperatures killed more than a few...
view all Nonreligious blogs
Copyright 2008-2020, Patheos. All rights reserved.