The local paper has an interview up with the judge who denied the atheists representation.  Much of what he said is worth commenting on.

He says all the personal messages he’s getting are supportive.  No shit?  A Tea Party official is only hearing supportive comments personally?  Fancy that.  And so what?  If the majority of citizens decided they wanted to break other laws, it wouldn’t matter then either.

What’s more, Judge Pendergrass is clearly not reading the comments in the local paper.  They mostly favor the law.

“They say ‘this is wrong’ and the county should be allowed to have this displayed”.  Are they lawyers?  Call me crazy, but their opinion may not be informed by a knowledge of the law, but rather what they’d most like to see personally.

Judge Mickey Pendergrass is the proper legal channel and the residents went and spoke with Pendergrass directly.  Pendergrass told them to inquire with attorney F.S. Spencer (the hardcore Christian attorney who put up the display the last 15 years) who has no legal authority for the county.

Here’s the comment section of that article.  Go own it.

While you’re in there, you can interact with the Christian shell of a woman, Cindy Horton.  Here are some of her choice comments: 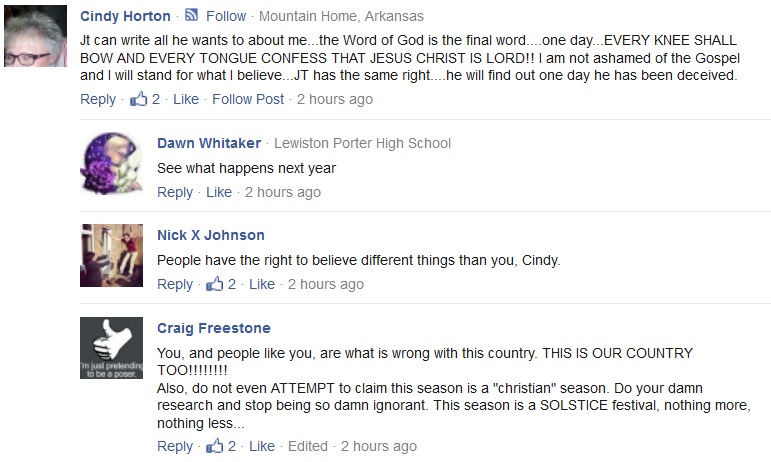 What a real winner.  Or how about this one?

MMMmmmMMMMmmm…feel that Christian love, you “idiots”?

It had better be put back up next year…or what?  The county will lose tens of thousands of dollars, if not hundreds of thousands of dollars in legal fees?  Yeah, we’ll sure be sorry then.  Actually, we will be, because those taxes are paid by non-Christians too.  Everybody will have to watch their money get pissed away so Christians can try to undermine the Constitution.

January 3, 2014
Christian tells me of my grandfather's deathbed conversion.
Next Post