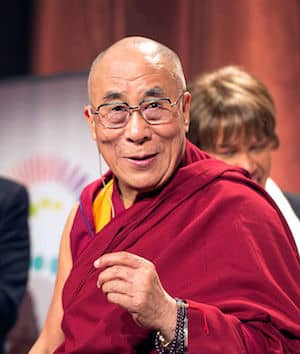 Tibetan Buddhists believe that the Dalai Lamas are successive reincarnations of Avalokiteśvara, the Bodhisattva of Compassion. A bodhisattva is a being who attains enlightenment but forgoes his or her own transition to nirvana until all sentient beings attain enlightenment. Because of this, the position of Dalai Lama has traditionally been seen as transcending national and religious boundaries in the service of all humanity.

The 14th Dalai Lama was discovered at age two in a small village in northeastern Tibet by monks who claimed a vision had led them there. He was said to be the reincarnation of the 13th Dalai Lama, who had died four years earlier.

Trained as a Tibetan monk from age six, he went on to assume first spiritual authority, then full political authority in Tibet at age 14 after the Chinese invasion of 1950. Nine years later, a Chinese crackdown on the Tibetan uprising of 1959 forced the Dali Lama and his government into exile in northern India, where they remain to the present day.

He has engaged in modern social media, with accounts on Facebook, Twitter, and Instagram. Some commentators credit this active effort to remain in public conversation, especially around issues of peace and nonviolence, for his consistent rank by such major polling organizations as Harris Interactive among the most popular world leaders.

This extraordinary popularity has continued unabated, even though the 14th Dalai Lama retired from active duties in the Tibetan government-in-exile in May 2011, at which point his official status as a world leader can be said to have ended.

Shortly thereafter, His Holiness issued a statement of his intention to consult with the high Lamas of the Tibetan tradition to decide whether the institution of the Dalai Lama should be continued or should end with him. “There is no guarantee that some stupid Dalai Lama won’t come next, who will disgrace himself or herself,” he said in a 2014 BBC interview. “That would be very sad. So, much better that a centuries-old tradition should cease at the time of a quite popular Dalai Lama.”

But the Chinese government issued a statement suggesting it would further consolidate its control of Tibet by appointing a 15th Dalai Lama after his death.


Patheos on the 14th Dalai Lama

Image by Christopher CC BY 2.0 via Wikimedia