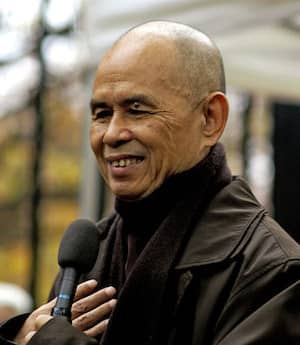 After serving as editor-in-chief of the periodical Vietnamese Buddhism in the mid 1950s, Nhất Hạnh went on to found a Buddhist press and university in Saigon, as well as a corps of Buddhist peaceworkers who helped establish schools and clinics in rural Vietnam. He taught Buddhism at a series of institutions, including Vạn Hanh Buddhist University, Princeton, and Columbia, before devoting himself to nonviolent activism and education.

In 1967, Nhất Hạnh was nominated for the Nobel Peace Prize by Dr. Martin Luther King, Jr.

In recent years he has established a number of monasteries and mindfulness centers in several countries including Vietnam, the United States, and France. He currently lives in Plum Village, a Buddhist retreat in France.

MY JOURNEY OF CONSCIENCE

Image by Duc (pixiduc) CC BY 2.0 via Wikimedia