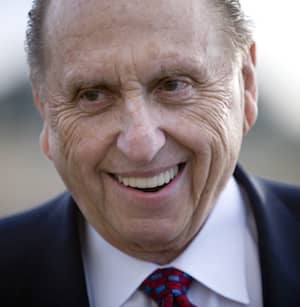 Born and raised in a Mormon family in Salt Lake City, Monson graduated from the University of Utah in 1948 with a degree in business management. He served briefly in the U.S. Naval Reserve, then became an advertising executive with the Deseret News.

At 22 he was named a bishop of a Salt Lake City LDS ward and continued his career in publishing, becoming general manager of the Deseret News Press. In 1963 he was elevated to the Quorum of the Twelve Apostles, the governing board of the LDS Church. He served as Counselor to LDS President Ezra Taft Benson upon Benson’s succession in 1985, as well as the two Presidents that followed.

Monson became President of the Church on February 3, 2008, one week after the death of the previous President, Gordon Hinckley. His presidency has included some of the most tumultuous years in LDS history, including sex abuse scandals, a church policy requiring the children of gay parents to renounce their parents in order to remain in the church, and several high-profile excommunications and mass resignations.

Monson is the author of 12 books related to LDS life and practice.