Women's rights have already played a big role in the 2012 elections, and rightly so. More than half of our nation's citizens are women, and it's about time that government officials give proper attention to the largest traditionally marginalized group. Unfortunately, not all the attention is positive, or even supportive. Shockingly, after all these years, essential human rights, like autonomy over one's own body, are actually up for debate this election season.

The latest attack on women's rights comes from the movement's longtime nemesis, the Religious Right. Christian conservatives have made numerous offensive statements regarding rape and the right of the victim to end an unwanted pregnancy. For example, Indiana's treasurer and Senate candidate Richard Mourdock said recently that pregnancy from rape is "something God intended" as if that's somehow an appropriate and sufficient reason for not exempting rape victims from a complete abortion ban.

Where do religious fundamentalists get the justification for such extreme ideas? They believe it because the Bible tells them so.

While millions of mainstream religious Americans reject the literal truth of the Bible (as if there's only one version anyway), there are also millions of biblical literalists who don't exactly have good foundational material when it comes to rape and what place women should hold in society. This is evidenced by Deuteronomy 22:28-29, "If a man happens to meet a virgin who is not pledged to be married and rapes her and they are discovered, he shall pay her father fifty shekels[a] of silver. He must marry the young woman, for he has violated her. He can never divorce her as long as he lives"; by Deuteronomy 22:23-24 (which describes a rape victim who doesn't call out during the assault and must be killed in the town center); by Colossians 3:18 "Wives, be subordinate to your husbands, as it is fitting in the Lord"; and by 1 Timothy 2:12 "A woman should learn in quietness and full submission. I do not permit a woman to teach or to assume authority over a man; she must be silent."

What Mr. Mourdock and his fellow Christian conservatives fail to take into consideration is that they represent a relatively small segment of the population. Many religious Americans, such as Jews, Hindus, and progressive Christians, don't necessarily believe that God intended victims to be raped, and may not believe that God wants them to bring unwanted children into our overpopulated world. And if mainstream religious are being misrepresented by the far right, the values of nonreligious Americans, who now make up to 20 percent of the U.S. population, are being even more marginalized, as the Religious Right attempts to coerce all of us into participating in a divine plan that we don't even believe in.

Christian conservatives are either ignorant of the pluralistic society in which we live, or they are demonstrating their disrespect for others as they aim to make their way the only way. Of course, Americans come from a wide variety of backgrounds and maintain a range of religious belief, including no theistic beliefs at all. The laws being sought, including the banning of abortion with no exception for rape or incest, fail to take into account the very diversity that makes this nation so great. Laws apply to everyone equally, which is why they must be designed with the interests of all members of society. That's why a particular sectarian belief system isn't a good foundation for legislation.

Christians who believe that pregnancy resulting from rape is a gift from God are perfectly within their rights to think that, and the women who adhere to such beliefs are perfectly within their right to continue with their pregnancy. Most Americans would agree with this because they recognize that an individual's religious beliefs and personal autonomy over their own body are important freedoms that must be protected in a democracy. At the same time, most Americans would also agree that those who wish to end an unwanted pregnancy should be able to do so, and that the religious beliefs of others shouldn't stand in the way of such a decision.

As a country, we must remember that the toleration of a wide variety of political and religious beliefs is essential for maintaining national harmony, and we must remind our representatives in government of this need for toleration if they forget it. 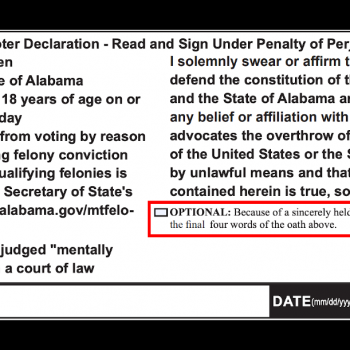 Atheists Will No Longer Have to Swear an Oath to God in Order to Vote in...
Hemant Mehta
2

New PODCAST: What's With All the Deconstruction Stories?
Matthew Distefano
4 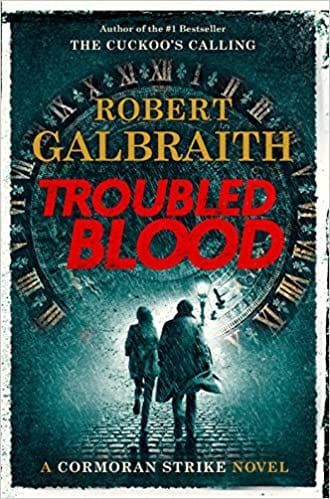 Troubled Blood--- Robert Galbraith (aka J.K. Rowling)
Ben Witherington
Get Patheos Newsletters
Get the latest from Patheos by signing up for our newsletters. Try our 3 most popular, or select from our huge collection of unique and thought-provoking newsletters.
From time to time you will also receive Special Offers from our partners that help us make this content free for you. You can opt out of these offers at any time.
see our full list of newsletters
Editor's picks See all columnists