Being Who We Are Made to Be 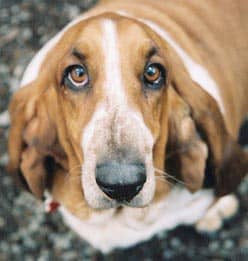 Human beings, perhaps alone among God's creatures, often desire to be something other than what they are.  Indeed, sometimes we want to be anything else, anything other than the weak and broken, faulty and limited men and women we are.  Every day we see the lives of beautiful and successful people on television and we are inclined to feel unsatisfied with our lot, eager to be more wealthy, more intelligent, more beautiful or handsome, to live lives of fame and fortune.

When I worked in a secular field, one of my favorite parts of every day was returning home.  Not only would I see my family, but I would see my dogs and the unrestrained delirium that took possession of their bodies when they saw me walking toward the door.  The dogs who have lived with us over the years even had different names to describe the way they greeted us.  My second son called one dog "Wiggle Worm" for the way she shook her body while twisting one way and then another; "Pogo Pup" launched herself straight up into the air with her hind legs; another, who once chewed down a tree in the back yard and dragged it around, was known as "Leaping Beaver."

What was notable about the dogs was not merely their joy, but their absolute lack of pretense.  Even Ramses the Great, with all the pressures he faced as the Lord of the Nile, gave himself over to utter and joyful abandon.  A pretentious Pharaoh he was not.  He was simply being what God made him: a joyful dog.  Nothing more and nothing less.  God made them dogs, and they are joyfully expressing their doggy-ness.  I have never once seen my dogs try to roar like lions or smell like flowers or fly like falcons.

Contrast that with all the ways in which we humans try to transform or conceal who we are.  We primp and pluck.  We put on airs.  We pretend to be smarter, more successful, and more confident than we are.  We color our hair and change our appearance, we have liposuction or plastic surgery, or we tell lies in order to give a better impression of ourselves.

This is not to say that we shouldn't strive for excellence and self-improvement.  But we should strive to excel and to improve in the right things, and we should be honest about who we are.

No liposuction or plastic surgery or change of reputation will make us happy.  What will make us happy is taking joy in who God made us to be.  As Ecclesiastes 7:29 reads, "This only have I found: God made mankind upright, but men have gone in search of many schemes."  God also made us with a purpose, as Isaiah 43:21 says in the King James Version: "This people have I formed for myself; they shall shew forth my praise."

Sometimes we grow discouraged because we focus on all that we are not in the eyes of the world instead of all that we are through the workmanship of God.  God's design is not flawed.  Until we can learn to be joyful in what God has made us to be (physically, emotionally, mentally, and spiritually), we will not find the joy that He wants for us.

God created you to be a worshipper, a lover, a child who loves the Father and lives in fellowship with Him.  We need to stop trying to change ourselves, and instead focus on being what He designed us for: to be instruments that play the music of His love and witness His goodness throughout the universe for all eternity, leaping and twisting in the joy of being made in His image and called by His name!