September 08, 2011 by Joseph Susanka
"Like" the Patheos Catholic Page on Facebook to receive today's best commentary on Catholic issues. 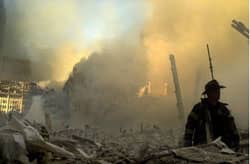 Heroes are an inscrutable bunch.

On the one hand, they are dramatic, exhilarating characters who inject light and courage into hopelessly dark scenarios. At times, they barely seem human; the motivations behind their actions so far above ours as to be almost unrecognizable. Is it any wonder that the modern consciousness has moved so easily from hero to idealized superhero?

Yet they are also distressingly real, and too often we are surprised to learn that our heroes are flawed, clay-footed men and women.

Just human beings, after all.

Perhaps nowhere in American popular culture is this particular duality more evident than in the historical development of a pair of cinematic genres: the "Cowboy Movie" and the "War Movie."

At the zenith of their popularities, both genres featured heroic-unto- mythical characters and romanticized ideals. And both were largely disinterested in ascribing complex motives and morals of its heroes.

So idealized were the genres' protagonists that actors often moved easily between the two. John Wayne's cowboy was nearly indistinguishable from his sailor, while Gary Cooper was as comfortably believable in Sergeant York's skin as he was in The Virginian's. (It should come as no surprise that such Western stalwarts as Jimmy Stewart and Henry Fonda took their big-screen talents into the real world: both Fonda and Stewart were highly decorated for their service in WWII.)

Gradually, however, these films grew darker and more complex. No longer satisfied with simply presenting heroism—or presenting simple heroism—to their audiences, writers and directors began to dabble with a de-glamorized understanding of heroism and those who practice it. Directors Sam Peckinpah, Sergio Leone, and Sam Fuller, suggested that heroes were often motivated as much by self-interest as by idealism - an idea that grew stronger with each passing film. By the time the cinematic visions of Clint Eastwood and Oliver Stone were being realized, the uncompromising, unadulterated hero of the 30's and 40's had become a thing of the past.

I myself have always been partial to the optimism and simplicity of the earlier films. But it is only in considering both sides of the hero's equation—the self-sacrificing idealism and the flawed human motivations that impels it—that we can understand heroism at its depths.

For my generation, few events afford a greater opportunity for reflecting on heroism's true nature than does this Sunday's anniversary of September 11th. The stories of those brave first-responders, stubbornly refusing to acknowledge the impossibility of their task and struggling to save as many lives as possible are matched only by the stories of those like Welles Crowther, the Man in the Red Bandana, who went back into the inferno time and again in a sacrificial effort to lead his fellow victims to safety.

For the student who wishes to study heroism in all its glory, few events could provide as much material as the agony and valor of the Twin Towers.

At the same time, we are left to ponder the reality that remains behind: the political and global upheaval in the aftermath of the attacks, the struggle to find meaning in tragedy's wake, the anger and resentment of so many who have been so deeply hurt, and the long-lasting physical and mental impact on those very responders who performed so heroically that day,(and in the days and weeks that followed. If you're looking for romantic idealism, there is precious little to be found; the reality of "life after heroism" is difficult and often unsightly, displaying none of the exhilarating, superheroic traits pop culture has trained us to expect. Instead we are left once again with flawed, sorrowful human beings and their heartrending struggles, making us wonder if idealism is not simply a crutch for those too weak to admit its nonexistence.