The theme of the good and the bad (22:10) recalls Matthew's understanding of the church as a mixed body (13:24-27; 47-50). The parable of the wedding garment, which Matthew adds to the Feast parable (22:11-14), brings in Matthew's habitual themes of discipleship against the constant backdrop of coming judgment.

Just before this parable of the Wedding Feast/Wedding Garment in Matthew we have heard two others parables: the parable of the Two Sons (21:28-32) and the parable of the Wicked Tenants (21:33-39). This sets up a triad of parables that all deal with rejection or refusal. The setting to which Matthew addressed his gospel was a church that was engaged in missionary activity that was meeting with rejection. The first parable of the triad (the Two Sons) mentions the rejection of John the Baptist's ministry. The second (The Wicked Tenants) alludes to the rejection of Jesus' historical ministry. This third parable (Wedding Banquet/Wedding Garment) refers to the rejection of the preaching of Christian missionaries on behalf of the Risen Christ. The coming of God's reign is often imaged as a banquet (Isaiah 25:6-8; 1 Enoch 62:14) or a wedding (Isaiah 62:1-5) (Donahue, 94-05).

We flinch when we read the treatment of the man in the verses 11-14. It seems so unfair that this poor man be punished for not having the proper garment. Though his actions are harsh, they are not completely unjustified, when understood in the first century context. It was the custom in Ancient Near Eastern weddings, that the guests would wear a garment that symbolized their respect for the host and the occasion. Often the host would provide a rack of such garments at the entryway for guests who had brought theirs. Not to be wearing a wedding garment, when one could have chosen one on the way in, is a sign of disrespect for both host and occasion. The symbolism of putting on clothing reminds us of Paul's image of "putting on" as a symbol for adopting the life of discipleship to Christ (Galatians 3:27; Colossians 3:12; Ephesians 4:24). The wedding garment stands for the Christian life, and the qualities that lead one to hear the invitation, to accept it and show up to honor the host (Donahue, 95).

He is just there for the food. He is like the crowds in John's gospel whom Jesus says follow him not because they understand who he is and seek to honor him, but because they "ate the fill of the loaves" (John 6:26). He has no respect for the king or the king's son. I have a friend who visits various firms and does presentations on various construction products. She provides box lunches for those who sign up to attend the presentation. Every now and she'll see someone who hasn't signed up standing at the end of the buffet table, loading box lunches into a shopping bag as if it were a take out restaurant. She becomes annoyed and corrects the person's misapprehension about the nature of the event, but hardly throws them into the outer darkness to weep and gnash their teeth!

The man without the wedding garment is like the son in the prior parable who said he would come, but did not. He is a hearer but not a doer. He does not produce fruits worthy of repentance. He does not follow that higher righteousness Matthew expects of his Christian community, whether former Jews or Gentiles. In Jesus' ministry, it seems as if this parable of the feast summoned listeners to a critical choice to accept the authority of his teachings and to live by them. Matthew has adjusted this parable of the wedding banquet/wedding garment to address his church in its conflict with the synagogue down the street. He wants his listeners to understand that anyone who does not honor the host and the banquet, whether outside or inside his community, will not ultimately enter the kingdom of heaven.

I know parables can't be reduced to just one moral; Matthew's version has at least three:

"What can I do, as one person, to make this world a better place?"
Dan Peterson
2 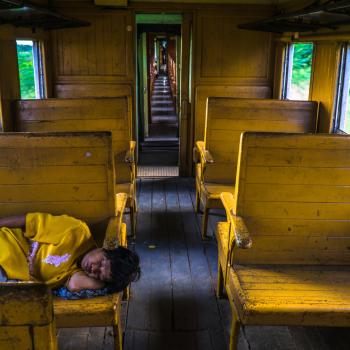 Finding Rest in A Tumultuous World
Anna Pepperling
Get Patheos Newsletters
Get the latest from Patheos by signing up for our newsletters. Try our 3 most popular, or select from our huge collection of unique and thought-provoking newsletters.
From time to time you will also receive Special Offers from our partners that help us make this content free for you. You can opt out of these offers at any time.
see our full list of newsletters
Editor's picks See all columnists