In June 2012, Catholic Bishop Shlemon Warduni of Iraq spoke about the persecution of the Church in Iraq to the Catholic bishops of the United States gathered for their annual Spring meeting. (The address can be found here, for those who are interested). He spoke movingly and eloquently of the plight of Catholics in his country, a country that has for centuries been home to one of the most ancient churches of Christendom.

Bombings, murder, violence, the confiscation of property, harassment, and imprisonment are all part of what Christians face in Iraq every day—something so unknown to us Catholics here, in the United States.

After his talk, Bishop Warduni fielded questions from the U.S. bishops and offered a number of "off the cuff" remarks. At one point, he issued a very clear warning to the gathered American bishops on what he saw happening in the United States, when he spoke about the distinction between "freedom of religion" and "freedom of worship." As I recall, his words went something like this:

I must warn you, my fellow bishops, about something that I see happening in your country and that is the distinction that is being made in your country between freedom of worship and freedom of religion. In Iraq, we have freedom of worship—at least for now—but we do not have freedom of religion. We are "free" to go into our churches and houses and shut the doors and worship as we see fit. But we are not free to do anything more. We cannot display a Cross in our stores or on our doors. We cannot carry a Bible in public. We cannot talk about our Faith in public. We cannot proselytize. We cannot evangelize. It is illegal to convert to Christianity and it is illegal to try and convince anyone to convert Christianity.

Now, in no way do I mean to equate the persecution of the Church in places like Iraq with the present questions of religious freedom that the Catholic Church is facing in the United States. Neither, obviously, did Bishop Warduni. It is not even close. His is a church that faces the threat of real violence and death, every day.

When I hear our elected leaders speaking now about protecting "freedom of worship" rather than "freedom of religion"—and they do, they most certainly do—I remember the powerful words of Bishop Warduni and I wonder if we Catholics are, more and more each day, being forced to practice our faith within the closed doors of our churches, and no where else. 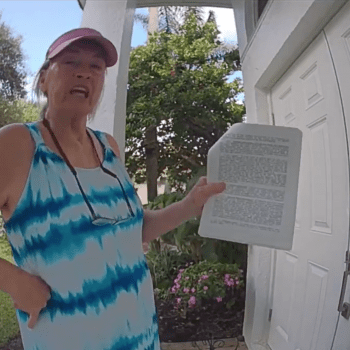 Why “It’s the Great Pumpkin, Charlie Brown” is so relevant to politics and...
Jim Denison
Get Patheos Newsletters
Get the latest from Patheos by signing up for our newsletters. Try our 3 most popular, or select from our huge collection of unique and thought-provoking newsletters.
From time to time you will also receive Special Offers from our partners that help us make this content free for you. You can opt out of these offers at any time.
see our full list of newsletters
Editor's picks See all columnists