Hindu worship typically takes place either at home or in the Temple. Many Hindu homes have an altar set up, paying homage to the particularly beloved gods or goddesses of the household. The altar might include a murti, or an image of a deity which helps focus the prayers of the worshipper. The home altar at which Hindus typically worship might also include offerings, such as flowers, perfume, or food. Many Hindus have a strong connection with prayer and devotion, and this worship often takes place at the home altar. The prayer worship ritual in Hindu traditions is known as puja, or the act of devotion. In Hindu families, it is common for a simple puja to be done at the family altar once a day. Hindu worship at home is not bound by specific time expectations or demands. A Hindu individual might visit their home altar once a day, or less frequently. In addition to a daily puja at the home altar, many Hindus will offer puja before a big life cycle event, or if they have an important task at work, or if they are about to go on a significant trip.

The other place where Hindus typically worship is at the Temple, known as the mandir. Hindu temples are beautifully built spaces, often evoking many theological concepts through their design. While the altar in the Hindu home is the space for the worshipper to pay homage to the deities and offer supplication and respect, the Hindu temple is designed to be the space where gods and human beings encounter one another. A variety of Hindu scriptures detail the ideal presentation of the Temple, from the geometric shapes to the proportion of different design elements.

The Temple is the site of worship for many Hindus, though the worship is less communally oriented than in other religions. While different days of the week are dedicated to different deities, there is no one day where it is expected for a Hindu to worship at the Temple, instead of at their home altar.  A ritual of worship in the Temple is often a more elaborate version of what one might complete at home.  A typical puja might begin with the priests and center around a murti, or an image of a deity. In the initial encounter, the image might be appear clothed in common clothing, and mantras would be recited. The image might then be bathed, anointed with oils, and then bathed again with water that has been purified by recitations. At this point the image would be considered purified, and would be dressed with fine clothes, perfumes, flowers, even jewelry. The priests overseeing the ritual would then recite sacred verses, inviting the deity to inhabit the image. The image would then be offered food. Traditionally, such rituals are not public affairs but occur in the Temple behind a screen or away from the eyes of any crowds that might have gathered. Only once the image has been inhabited and dressed will it appear in public.

For more on Hindu prayer, check out here.

Dressing Deities: a form of worship
How To Make a Puja Room
How To Use Japa Mala Beads
Mantra v.s. Prayer: What's the Difference?

Catholic
A Golden Calf? Or Another Idol?
Mary Pezzulo 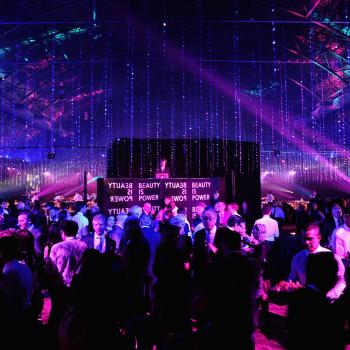 Public Square
How New York's 19th-century Jews turned Purim into an...
The Conversation