Spiritual exploration, says Arthur Brooks, is one of life’s great adventures, full of twists and turns and surprises. The best-selling author, popular speaker, and Harvard professor spoke with our editor at large about his teenage mystical experience, being a person of faith on an elite campus, and the link between religion and happiness.

I was raised in a strong Christian home. Both my parents were evangelicals. My ancestors were missionaries on both sides of the family. Growing up, everything was imbued with religion. In fact, I don’t remember ever not being a Christian.

At age 15, I had a semi-mystical experience. As I have written elsewhere, at that age I visited the shrine of Our Lady of Guadalupe as part of a school band trip to Mexico. On that location, according to tradition, in 1531 an indigenous Mexican peasant named Juan Diego reported an apparition of the Blessed Virgin Mary. Visiting the shrine as a teenager, I had a profound experience. I felt like Mary was appearing to me. I returned home to Seattle and started the process of converting to Catholicism. At 16, I was Catholic.

Thus began the great adventure of my life: to seek and find God and develop a friendship with Him. Now I go to Mass every morning, and I say the rosary every evening. I spend a half hour in prayer or mystical conversation every day. In all, I spend an hour and a half on my faith each day. Being on a spiritual adventure is like winding my way down the Missouri River, not knowing where it’ll lead or what I’ll find. My spiritual practices provide the means to sustain and nourish me along the way.

God is all things and is in all things. The best we can do when defining God is to conjure a metaphor. All religions use metaphors. But when God defines Himself, He calls Himself “I am.” The process of gaining a deeper understanding of God involves moving away from metaphor and becoming more comfortable with “I am.” When I look at a painting by Picasso, I don’t see Picasso; he is the “I am” of that painting. He can only be experienced through the outward manifestation of his creation. It is the same with God.

I’ve come to understand and appreciate the role of the Church in a completely different way. Now that I understand the Church a lot better than I used to, my view of it today is both more admiring and more jaundiced. In the United States, we essentially have a “free market” for souls. That situation has led to a vast variety of faiths. God created different kinds of people, and their personalities bring them to Him in different ways. This requires many different confessions. I appreciate that diversity, but I’m not a universalist. The Catholic confession matches how God wants me to worship him.

There’s a well-established link between faith and happiness. Psychology defines happiness as subjective wellbeing. Being religious doesn’t necessarily lead to greater subjective wellbeing than other modes of living. But it does offer a sense of the transcendent and it diverts the focus away from thinking about ourselves all the time. Depression is so boring because it’s so self-focused. It keeps us trapped in the bubble of the self.

The intellectual class has never been very religious. Members of that class tend to believe religious ideas will be supplanted by worldly wisdom and knowledge. I’ve never been resentful about being a person of faith in an academic culture. It can feel a little retro, and can be awkward at times, but that’s fine. It’s not dangerous; this isn’t first-century Antioch! I’m grateful to live in the freest country in the history of the world. I want to live in a pluralistic society. God led me to an academic environment to be a minority voice.

There’s a saying that “Dad gets the family to church, and Mom gets the family to heaven.” My wife, Ester, was raised in a Communist household in Barcelona. She never went to Mass. One of my goals when we got married was that we’d have a Catholic family. For years, I would pray each week at Mass that Ester would join me at worship. She became a practicing Catholic, and now she’s very engaged in adult evangelization. She’s become my teacher.

Faith shouldn’t be treated as an algorithm. The point of life isn’t to paint-by-numbers until we die. Approach spiritual exploration with a spirit of adventure. It’s a gift, and part of what it means to be human. Proceed with openness and without fear. That’s when God’s greatest promises come true, and when you’ll understand things you’ve never understood before. So get in the canoe and start paddling!

Appearing to the 500-Plus: Debating the Evidence.
Jonathan MS Pearce
3 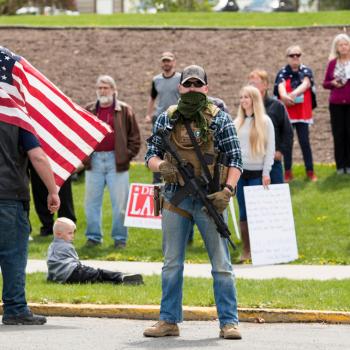 Title: "Radical Catholic Reactionaries": Exchange w Karl Keating
Dave Armstrong
Get Patheos Newsletters
Get the latest from Patheos by signing up for our newsletters. Try our 3 most popular, or select from our huge collection of unique and thought-provoking newsletters.
From time to time you will also receive Special Offers from our partners that help us make this content free for you. You can opt out of these offers at any time.
see our full list of newsletters
Editor's picks See all columnists