Get Involved: An Interview with First Minister Givan 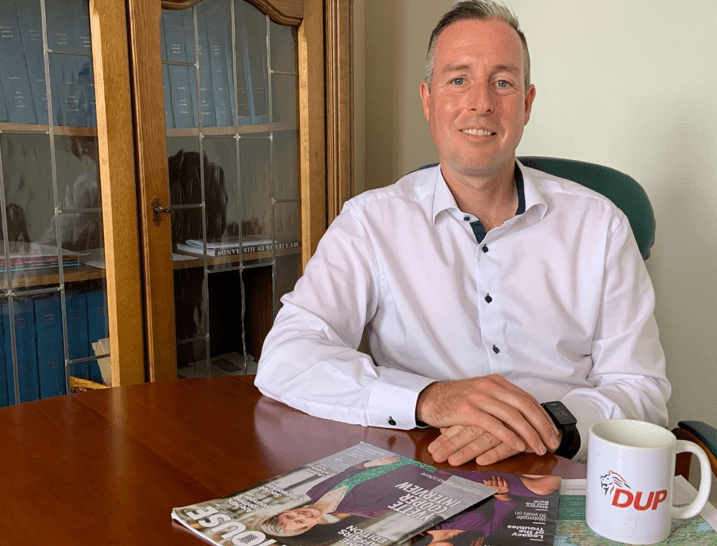 Paul Givan MLA, former First Minister of Northern Ireland is making me a cup of tea. We meet in his constituency office, an impressive red brick building, which was once Lisburn’s town hall. I take a seat across from his desk and hit record on an audio file.

We start off with Givan’s Christian childhood, “immersed in evangelical Christian faith.”

Later in life, Givan joined the Free Presbyterian Church – founded by the Reverend Ian Paisley, First Minister from 2007-2008 – and has attended the Lisburn congregation ever since.

He describes a conversion experience, one that will resonate with many Patheos readers, which took place when he was a young child.

“And so, it was only whenever I was five, that simple childlike prayer of asking the Lord into your heart, and that was when I was five years of age.”

To begin our conversation in earnest, I pose a quotation to Givan from Pope Francis: “We need to rehabilitate Politics with a capital P, as I like to call it, as a service to the common good.” His Holiness evidently holds politics in high regard.

“It is a vocation above all for those disturbed by the state of society and the plight of the poorest.”  (Let Us Dream, p. 6).

Givan likes what he hears.

“It’s a really good quote in terms of what it is to be in politics.”

But it’s not always, the ex-First Minister laments, the perception the general public usually holds of elected officials.

“I think there’s a stereotypical view of politicians in it for themselves, power-hungry, and I think that’s a lazy assumption.”

“You don’t need to be a Christian to have a sincere desire to serve the community,” notes Givan. He points out, however – as a counterweight, almost – how remarkable the Christian Church’s humanitarianism has historically been. “When I look back to the New Testament times, it was the Church that was meeting the needs of the poor, the needy, getting involved in society.”

Government isn’t a magic remedy for all our ills; Givan is emphatic on this point.

“I just would say be careful,” urges the Lisburn MLA, “not to hand over our responsibility as the Church to do things for the glory of God and giving that to the government to do it.”

All of us are called upon, as Christians, to make a difference in our communities.

“We have a very clear view as to what is good for society, based upon the Scripture, which the Church has to take forward, not just franchise that responsibility out to the government.”

Prior to the First Ministership, Givan chaired Stormont’s Justice Committee.

What are the main ideas which inform his outlook on criminal justice?

“You need to have a society that’s based in proper law and order, and when someone commits a crime,” Givan argues, “they should pay the penalty for that.”

Our approach to crime, though, cannot stop at retribution.

“We also need to invest in prisons to help rehabilitate people,” acknowledges the long-serving Justice Committee chair, “in the hope that they wouldn’t then do it again.”

One issue which animates Givan is the fight against modern slavery.

“The Human Trafficking Bill [2015] was an important piece of legislation. It was actually the first of its kind in these islands, in the United Kingdom and the Republic of Ireland,” he remembers with pride.

It’s easy to see how the man’s faith drove him to collaborate with other legislators on this bill.

“Of course,” Givan elaborates, “the motivation behind that is the intrinsic value of human life. We’re all made in the image of God, and that’s something that should inform politicians as to how they go about their legislative and political duties.”

The theme of human sanctity, the measureless worth of every person, heavily featured as well in our next area for discussion.

We talk about abortion.

“It’s a hard struggle. This one really does grieve me, in terms of where Northern Ireland once was and where it now is,” reflects the DUP man.

Ardently pro-life, he wants to prevent abortion through sociological reforms.

“How do we support people in crisis pregnancies, rather than just saying, “here’s the law: you’re not allowed to do this?”

Abortion is, obviously, the major debate in America. So, for my transatlantic readers, I made sure to garner our one-time First Minister’s opinion on two key SCOTUS judgements.

“I think that decision was the right one. Ultimately, it’s for the local legislature in America to decide.”

“That wasn’t democratic. It was judicial activism that led to that change.”

And while we’re on the subject of America, Paul Givan is an admirer of erstwhile Vice President Mike Pence, “very genuine, sincere.”

And what of Trump?

“If I were an American, would I have agreed with everything that Donald Trump did and believed? No,” Givan says. “I wouldn’t have. But he made the right appointments to the Supreme Court.”

This, according to Givan, is normal in politics.

“You will struggle to get a politician that you can say, ‘I agree with 100% of everything that they do.’”

So then, even if Givan had reservations about who was heading the Republican ticket from 2016 to 2020, Trump’s running mate was a strong pull factor.

“Mike Pence would’ve made it very easy for me,” Givan affirms, as a man who conversed with Pence on several occasions, “to vote for the ticket.”

Education is next up.

In a recent High Court decision, teaching from a confessional Christian perspective was found to contravene the European Convention on Human Rights. My question was, ‘where do schools with a faith-centred ethos go from here?’

“‘I don’t subscribe to this singular state-controlled system,” replies Givan, “because ultimately, that’s informed by a particular viewpoint, and who says a non-faith, secular school is a better school?”

“We need to protect the rights of parents to be able to have schools of their choice.”

As will be clear, the previous First Minister is resolutely for parental control over their children’s formation.

And so, back to the High Court’s controversial findings.

“That ruling would be something that would cause me concern,” admits Givan, who still sits on Stormont’s blue benches as a legislator. “I certainly would do all in my power to protect pluralism of school offerings in Northern Ireland.”

Our conversation takes us, now, from education to secularism.

“We fall into the trap of thinking secularism means neutrality,” Givan observes, “It doesn’t.”

Are there merits to the secularist attitude?

“I don’t think secularism – humanism that takes a very much individualistic approach to life; it’s all about self – I don’t think that’s actually a good thing,” assesses Givan.

What is a Christian worldview?

Givan offers a definition: “It’s others first; self last. It’s about a greater sense of responsibility to community, and I think that’s a good thing.”

“I believe that our viewpoint, based on Judaeo-Christian values, is really good for society,” Givan continues, “and a lot of Western democracies that have been based upon that over many years I think we could rightly defend and hold up to other parts of the world.”

Before I go, my final question is, ‘what advice would you give to Christians considering a career in politics?’

“Get involved,” is Givan’s counsel. For those not in elected office, he cites Barnabas from the Pauline epistles, who spurred on his fellow Christian evangelists.

“Encourage Christians who are in politics.”

We wrap up forty-five minutes after we began. Paul Givan has been very generous with a large chunk of his morning, for which I’m thankful. More to the point, he makes a fine cup of tea!

Several photos later – always a must – and a firm handshake, I’m out again in the July sun, grateful for a fine chat.

About Matthew Allen
Matthew Allen is a writer and musician based in Northern Ireland. He is a graduate of Queen’s University, Belfast, where he studied Theology and Liberal Arts.