Of the Passing of the First-Born

My son died because he gained weight. He wasn't obese, and he didn't have diabetes. Elijah was born with a genetic disorder that impaired his muscular development. At first, we had no idea there was anything wrong. The initial signal of trouble was his vision. By four months, we could see silver clouds in his eyes. They were cataracts making him virtually blind. Then Elijah lost the ability to control the muscles in his mouth and he could no longer eat without a tube and machine. The death sentence was handed down as each breath took too much labor. My son was burdened by each ounce he gained. Elijah's muscles were not strong enough to take in the air. At eight months outside of the womb, my son, who was named after the prophet who never experienced physical death, died.

In only eight months, Elijah bore a lot of burdens. Cataract surgery meant general anesthesia, which meant two occasions of recovery and weeks of eye patches. His inability to eat meant several stomach surgeries and more anesthesia. He didn't just carry physical burdens, but emotional ones as well. As most children, he bore the burdens of hopes and dreams of the future. In his particular case, there were also the burdens of tears, of strangers, of whispers of concern, and quiet sobs of the nightmare.

The entire adventure was a spiritual and physical nightmare. Our world was turned upside down, and identities blurred to make us dizzy. Our minister wanted to know what the scientists thought. The doctors muttered, "He's in God's hands, now." Nurses told us to pray; chaplains told us to rely on x-rays. Elijah's saga showed just how fluid our categories of religion, profession, and identity can be. How else can we explain medical doctors offering as much spiritual sustenance as doctors of divinity?

As Elijah's eyes clouded and as his body withered, his saga revealed so much to me about the burden of another son who has carried too much weight in our culture: Jesus. While Elijah developed, was born, degenerated, and died, I was writing a book about notions of Christ's body and its importance in American society, politics, and culture from the Puritans to the present. As the days progressed, the boundaries between my personal life and my scholarly life faded. Just as Elijah longed to see and stared at the bright lights he could behold in the distance, I studied Puritans who rejected visual representations of Christ, but wanted so desperately to see and feel him. I read the autobiographies of former slaves who hoped to touch their new savior in the fields of their labor or their cabins of their pains. I sat with Joseph Smith and Mary Baker Eddy as they tried to describe the "indescribable" visions they had of God and his son.

The Bible's Gospel writers gave no description of what the Son of God looked like, and my son Elijah could not tell me what he saw. But this has never stopped us from trying to see the unseeable. From my experience and my reading, our quest to see is because we're trying to endure what seems so unendurable: suffering, pain, sorrow, and death. Christ as "victor over the grave" has such new meaning to me now as I study so many who are dead and as I spend my Father's Day in a cemetery.

And then Elijah was gone. I no longer see him except in pictures, drawings, and videos. And that's not him. They don't do him justice. They don't capture how his smile slowly developed or how his laughter exploded when playing peek-a-boo. The same is true of Jesus in our culture. Warner Sallman's Head of Christ (1941) is the most reproduced image in world history. You've seen it—either in a church, a living room, or a movie scene. It is even in The Help beside the photograph of the lead housekeeper's dead son. But the art is not authentic. Jesus entered the world as a physical presence for a time. His face had an expression when the adulterous woman was brought before him. His muscles responded when put on the cross. No matter how hard we try, no matter how hard we strain, we cannot recreate those moments. The Word was made flesh, but then we were left with words.

Elijah's gone; Jesus is gone. But they are both still here. I have my son's glasses in our bedroom, near various images of Christ throughout history. I have Elijah's feeding tubes near my first Bible. And now where a little boy should be is only a book about God's son and his pains in American history, The Color of Christ. It's dedicated to my first-born son, whose short life perhaps can touch others through some words he never had the chance to write. 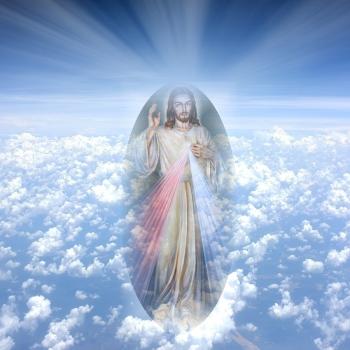 After 2,000 Years, Jesus Returns (But Just To Clarify A Few Things)
Matthew Distefano
About
Get Patheos Newsletters
Get the latest from Patheos by signing up for our newsletters. Try our 3 most popular, or select from our huge collection of unique and thought-provoking newsletters.
From time to time you will also receive Special Offers from our partners that help us make this content free for you. You can opt out of these offers at any time.
see our full list of newsletters