How Climate Change Is Spurring Renewed Faith Among India’s Farmers

Right in the heart of Madhya Pradesh, in central India, is a village known as Chikhli. Home to roughly 150 families, the village is situated in a rural area where farming is one of the primary occupations. Families might work in commercial or organic farming, but the farmers of Chikhli know that success is not in their hands alone.

“Between the months of May and June every year, everybody, including the sarpanch — head of the village — and entire families collectively pray to different gods by illuminating joss sticks and breaking coconuts at the temple,” said Shyamlal, a local farmer in the area.

His wife, who declined to be named for reasons of modesty, nodded along. “At whatever point we face issues like lack of rain or excessive downpour,” she said, “the first thing we turn to is god.”

And does praying work? “Of course it works,” said Shyamlal.

The ongoing Indian farmer's protests, which began at the outskirts of New Delhi in August 2020 and swelled to hundreds of thousands of farmers, have brought new attention to the plight of farmers in India. The protests began in response to the announcement of three new agriculture laws which many believe unfairly advantaged corporate businesses against the farmers, and they have persisted in the face of severe government pushback.

In late November, over 250 million farmers participated in a 24-hour strike, which many believe to have been the largest organized strike in human history.

But what of the role of faith in Indian farmers’ lives? 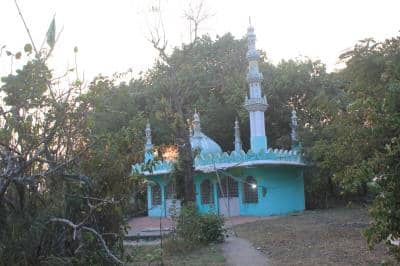 Farming has never been an easy or reliable business. But, in recent years, both climate changes and new regulations in India have made the experience even more unpredictable and unstable. Last year, India experienced a destructive wave of locust attacks, where multitudes of locusts invaded huge wraps of land, affecting about 90,000 hectares or more than 222,000 acres across 20 districts in Rajasthan and other states. In Chikhli alone, the rain patterns of the past twenty years have been unlike anything in the prior three centuries. In other parts of the country, the combination of over-irrigation and over-consumption of groundwater has led to catastrophic failures in farming, in addition to causing sacred rivers to run dry.

Many believe these new challenges are prompting a religious revival of sorts among India’s farmers.

“There certainly is greater emphasis placed on performing rituals and going to the temple,” said Dr. Deepak Sarma,  Professor of Religious Studies at Case Western Reverse University, noting this trend could be found in farming communities across the country.

“With the increase in the unpredictable amount of floods in my state, in the past few decades, my family and I pray to God all year long instead of only during the monsoon season,” said Yati, a farmer who works at a tea farm in Assam, a state that has experienced deadly floods ever since the Assam-Tibet earthquake of 1950. “Our ancestors never used to do that before.”

The return to traditional approaches is spurred, in part, by the sheer abundance of options and deeply-rooted culture of agricultural rituals.

India is a country where religious expression has long been intertwined with a reverence for nature, and many rituals exist to address the concerns of farmers. In addition to sanctuaries and temples built by people, there are no shortage of sacred spots centered around mountains, seashores, and streams. One of the most beloved figures in the Hindu imagination and belief system is Bhudevi, the goddess of mother earth. There are texts written in Sanskrit millenia ago that talk about agriculture’s relation with faith.

“Farmers have been using the techniques mentioned in old texts for centuries,” said Dr. Pankaj Jain, Professor of Philosophy and Religious studies at FLAME University, India. “They also have reverence not just for Hindu gods and goddesses but also for the sun that causes their harvest to grow, and Varuna — the god of rain and water, amongst others.”

Scholars also note the ways in which such faith motivates farmers across traditions. “Indian farmers, both Hindu and otherwise, have recognized this relationship between their laborers and the grace of Bhudevi,”  said Dr. Sarma. Dr. Jain added, “Faith remains the farmer’s core strength; be it Sikhism or Hinduism — all the local variations have always guided them.”

For farmers today, the increasingly precarious situation means religious worldviews increasingly dictate responses in both times of joy and crisis.

Guni Bai, a farmer from the district of Seoni, described how, at whatever point she and her family see lightning before it begins to rain, their thoughts turn first to God, not science or the imbalances between storm clouds and the ground. “God is feeling liberal today by giving us water for our crops,” she explained. And when it rains in the territory of Rajasthan — home to the world’s 17th biggest desert, and the world's ninth biggest hot subtropical desert — the farmers start to really dance, celebrate, and “thank all the gods for showing benevolence toward them,” said Kurban, a young farmer from the area.

But the increase in religious attribution to natural events can also lead to panic when crisis hits, as Kurban learned last year when the locust attacks destroyed his family’s entire season of crops, wiping out nearly a year’s effort of labor and work.

“Those monster bugs had obliterated nearly all that we developed for the season,” he said, adding that the shock of the attack forced him to acknowledge, for the first time, the reality of climate change in India. “In addition to all the obvious ways of getting them to leave, like banging pots and pans and smoking the field with dung, the only thing our families could do was assemble at the temple and ask god for forgiveness for any wrong we had done in the past.”

Kurban personally felt that God sent the locusts as a way to punish him and his family for taking the planet and its resources for granted. For him, seeking forgiveness in the temple and taking climate change seriously is one way he hopes to prevent future disasters.

Part of the concern is also the enormous implications for failure. Indian farmers feed over a billion people a year. As per 2018, agriculture employed more than 50% of the Indian work force and contributed 17–18% to the country's GDP. Rice is one of the chief grains of India. In December last year, China started importing rice from India, where they placed orders for shipment of about 5,000 tonnes (or more than 11 million pounds) of non-basmati rice. Other than that, India produces large amounts of wheat, mangoes, guavas, sugarcane, and cotton. Hence, if the farmers can’t hold on, there could be heavy economic deprivation in the country--and in other parts of the world that depend on Indian agricultural production.

Baba Gorpurm, a local religious leader from Seoni, believes this renewed emphasis on religious activity will unleash a powerful new wave of spiritual energy into the universe. “We are not an extremely rich country,” he said, “therefore, praying and having a connection with God is one thing that keeps the farmers going. If the farmers do their part in performing rituals, their prayers will be answered.”

For Gorpurm, the farmers’ turn to divine assistance suggests a religious confidence in their respective gods which  he believes will create a force of energy so strong that their concerns will have to be addressed.

For farmers like Shyamal, from Chikhli, the rituals might be a final resort, but they are not a shot in the dark. As he described the annual ‘Ashadhi puja’ ritual performed in his local Hindu temple, where a goat is slaughtered in the hope of a good season, or the rituals performed in response to moments of serious trouble, such as humming sacred chants while walking barefoot--“that has a serious impact” he explained--the strength of his faith was clear.

“For us, faith really remains our strongest weapon to manage any sort of crises like drought, increase of weeds, wild animal sightings on the grounds, excessive rainfall, significant degree of temperature rise, reduced sugar content, bad coloration, and harmful insects in agricultural crops, amongst others,” he explained. “Faith and religion are what encourages us to battle the environment and change.”

Others understand the trend as less about the metaphysical realities brought by prayer but, instead, as evidence of the important social and psychological role that religion can play in times of  crisis, and which has long proven a support system for the nation’s farmers.

“Indian farmers have been dealing with natural calamities for centuries,” explained Dr. Jain. “The farmers’ faith in Hindu gods and goddesses, or other natural resources, strengthened their belief in themselves and their work, and has kept them grounded,” he added.

In a world facing what increasingly feels like unprecedented crisis, the patterns of the past can bring less assurance. But for the average Indian farmer, faith is on the rise.