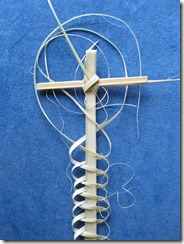 Oh yeah, bring on the Palms. It’s the craft of crafts, for the King of Kings! Hosanna!

Back when I was a kid, and went to a Catholic parochial school where actual sisters taught, there was a whole palm crafting culture going. Nowadays, most people just seem to take them home and tuck them behind their crucifix or portraits of dead relatives.

But not I! I actually make stuff out of palms—the way I was taught in a small way, but mostly the way I taught myself. A couple of years ago, my old priest, Friar Mark Weaver, OFM, Conv., called for old palms to burn to make the ashes used in the Ash Wednesday service. Most were just that—old palm leaves. But some were really cool—like flowers and intricate braids, so I asked him if I could keep them and figure out how they were made. He said sure and so I went to town. I’ve now elaborated on the braid and turned the top into a cross. I’m excited, but there’s such a short window of time to make things like this before the palms get too dried out. I’m trying to find a distributor so that I can get enough for myself to really learn some things. Naturally, the church only gets enough for people to wave at the start of the service.

But there are still a lot of cultures around the world that make things out of the palms that we get. Slowly, year by year, I’m increasing my repertoire. I’d like to do a class on it next year. We’ll see.

April 22, 2011 Making cupcakes
Recent Comments
2 Comments | Leave a Comment
Browse Our Archives
get the latest from
Catholic
Sign up for our newsletter
POPULAR AT PATHEOS Catholic
1

Listen to the Church, not LifeSite,...
Chaos and Old Night
Related posts from After the Ecstasy, the Laundry... 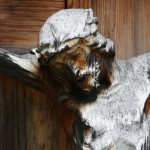