Get updates from Daffey Thoughts delivered straight to your inbox

The Six Faces of Halloween

I’ve said I’m a fan of Halloween.  Partly because in my younger days the Halloween season marked the unofficial countdown to that Holiday of Holidays: Christmas.  Partly because it was linked to the autumn, my favorite time of year.  Partly because it was linked to those old school memories.  By now in school, we were moving past the unsure first weeks of the new year, making new friends, meeting new girls, reclaiming old friendships.  Football, apple cider, homecoming parades and bonfires, harvest time and farmers reaping in the fields, cornstalks and haystacks, you name it.  A flood of great memories.

We’ve tried (and in recent years, I mean seriously tried hard) to keep some level of fun and festivities alive with the kids.  True, they are growing.  True times change.  True, things have sucked royally for the past couple years.  But try we have.  And when I say, despite it all, we still like Halloween, I mean it in the sense of everything it was, and all that it entailed for our kids, our family and our memories.

With that said, I’ve talked with a few folks who have questioned an open Catholic’s love affair with such a holiday.  Certainly in my Protestant days, among conservative Evangelicals, Halloween was a no-no.  Harvest festivals maybe.  But not Halloween.  The reasons being obvious.  Still, some have questioned whether Halloween festivities are consistent with a good, Christian household.  I think yes.  The reasons will be for another post.  But first, let me point out that when I say Halloween, there are some things I mean, some things I don’t, and some things that are along for the ride that I don’t give much though about.  That is, there are several faces of Halloween when you get right down to it.

First, the “Historic Halloween”.  Halloween, like Christmas, is a lightening rod for pundits.  Everyone knows where it came from.  Based, of course, on their particular agendas.  Either it was a pristine festival by lovely pagans that the evil Church stole, or it was a subversive attack against the Church by hostile forces of evil, or it was some slowly evolved holiday.  Fact is, we don’t really “know”.  That’s because there is no document out there written in 1489 by Johann Smith that said “On this day, I, Johann, do invent Halloween.” The best we can do is guess.  And those guesses, as with all history, are based heavily on what we hope to prove.

Still, we know that there were pagan holidays and non-Christian practices roughly coinciding with this time of year.  We know that the Catholic Church celebrated All Saints Day on November 1st.  And we know that the customs all have their origins somewhere.  Some find solace in leaning on that as a way to give validity to the holiday.  Some, such as the good people at Fish Eaters, see it as a chance to remind ourselves that Hell may actually still exist and be a real possibility.  I’m OK with it.  I like the historic origins, as long as I remember how much we know and how much we only imagine we think we know.  So there is the Historic Halloween, which I always try to remember. 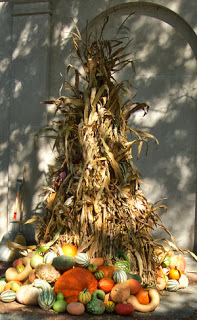 Second, there is the Harvest Halloween.  That’s that holiday most associated with Colonial life, and steeped in the harvest season and the oncoming winter.  Borrowing heavily from Irish and other European customs, it really finds itself in our country in later years, but there is still that Harvest link.  That’s where the pumpkins and haystacks and cornstalks come from.  It’s also that “Harvest Festival” part that conservative Christians are comfortable with.  Truth be told, I’m OK with it, too.  There’s something rustic, natural in it that reminds us of more agrarian days, when life was tied to the seasons more than today.  I can’t imagine Halloween without these.

Third, there is the Hollywood Halloween.  This is the part of the holiday that gets its cues, not from tradition or folklore, but from Hollywood.  What does Universal’s Frankenstein, Dracula and The Wolf Man to do with Halloween?  Nothing in the historic sense.  Nor do ghosts and spirits have everything to do with Halloween.  When we watch our annual ‘Halloween Haunts‘, we’re reminded with Lonesome Ghosts that it was Winter, more than Fall and the Harvest, that many old timers associated with ghosts and the spirit world.  Sometimes around either solstice.  But ghosts and ghost stories were every bit at home around the Winter solstice as they were in the Fall (there’ll be scary ghost stories, and tales from the glories, of Christmases long, long ago…).  But thanks to Hollywood, and some select twists on old tales, many seem to reserve the Halloween season for that time when ghosts walk among us, in addition to walking corpses and vampires and other things never historically confined to the Halloween date.  Scary.  It’s OK, and a fine part to a season worth remembering there’s more to think about than terrorists or serial killers. 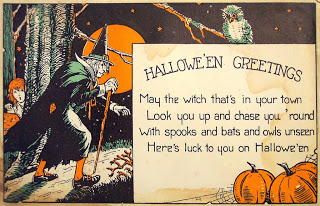 Fourth, you have the Commercial Halloween.  That was the Halloween tied to American commerce that enjoyed a boost in the bountiful years following America’s victory in WWII.  Money was everywhere, and commercialism was taking off.  Buying stuff and things was all the rage. Plastics and cheap materials were making things available like never before.  Costumes abounded, and pretty soon there was a costume with a plastic vest and mask that allowed kids to be everything from Superman to the Devil to Howdy Doody.   Other paraphernalia also began to be common, and decorations, cut outs, cardboard skeletons and other fun things could adorn a house for only a few dollars and make it as festive as the most holly and ivy bedecked home during a Victorian Yuletide.

Fifth, we have the modern Halloween.  This is the Halloween that, like so much else in our culture, is a giant hangover from the drunkenness of decades of materialism and commercialism.  Gaudy, cheesy and tacky statues, gravestones, blinking lights, fake webbing, neon signs, strobe lights.  And keeping with the post-Christian media saturation of our culture, mo
st costumes reflecting the latest in the same way that Dracula and Frankenstein became part of the Halloween mix of yesteryear.  But now that contribution is in the form of puss dripping zombies ala The Walking Dead, or ax wielding killers in hockey masks, or gore and violence and heads with axes through the middle. 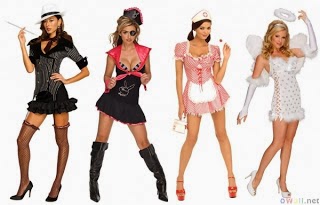 Following close on the heels of this, of course, is the sexed up cultural influence.  If little girls once dressed like a princess with a plastic tiara, now they dress like girls on the make waiting to bed the boy (or girl) dressed like a Power Ranger down the street.  Entire costume lines exist to help add a pornographic element to the holiday, and aren’t reserved for those over 18.  Gore, tacky and sex.  That’s what Halloween has become.

Finally, you have the occult.  You have that element of Halloween associated with the supernatural, the forces of Darkness.  Satan.  Hell.  Sabbats and a Night on Bald Mountain.  In some corners, it’s deliberately used that way.  In others, it’s lifted up to mock the Church in a sort of ‘ha, in your face’ sort of way.  Ironically, perhaps the worst part of Halloween isn’t in those drawing pentagrams in the dirt of a crossroads at midnight, but in the cheap plastic devil masks that make light of the reality of Hell and the demonic.  I don’t care for dressing up as demons.  Nor do I care for my boys dressing up in silly devil costumes.  Both, IMHO, are not healthy attitudes when it comes to grasping the powers of darkness that war with The Light.

Those are my different approaches and takes on Halloween.  For me, a dose of historical nods, harvest celebrations, and a healthy respect for the spirit world and even the realities of eternity all come to play their parts.  Fallen leaves and bare trees point to the fact that we are all dust, and to dust we will return.  As long as it isn’t too much, there’s not a whole lot about Halloween I don’t like.  It doesn’t bother me that some customs might be Celtic, or that the Invisible Man really isn’t tied to the historic roots of the holiday, whatever they may be.  But I draw the line at uber-violence, gore for gore’s sake, sexed up floozy girls, and boys walking about with knives through their throats. 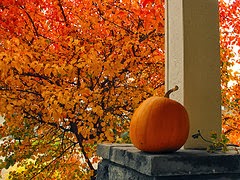 In fact, in recent years, I’ve begun to settle on a less-is-more approach.  For some reason, remembering my home growing up, where a couple cut out skeletons and some cardboard witches and pumpkins were all that decorated our home, apart from a couple pumpkins seems to bring about a stronger connection with the feel of the ‘season’.  For season it is.  And like my oldest pointed out, it’s the season that’s as much fun as the holiday itself.  So while we’ll still have the decorations, I think we’re done with trying to out-gaudy the neighbors; though in truth, we see less of those houses than we used to – probably economy as much as anything.  A house overflowing with flashing lights and giant dummies in the yard now looks cheap and fake, commercial and superficial.  But a house with a few cornstalks, a couple cutouts in the windows, and a jack-o-lantern* to me, at least, hearkens back to a festivity that, if not an actual holiday, at least deserves its place in the lineup of enjoyable links to the past and future memories.

*While working as an editor, we had a book of editing ‘suggestions’.  These were terms that were to be used in light of modern sensitives.  Rather than Jack-O-Lanterns, we were told Halloween Lanterns.  Jack, after all, it explained, was gender specific and potentially offensive to certain (read: women) readers.  You want scary?  If that doesn’t scare you, I don’t know what will.

October 6, 2013
For the offended Indians who want to change the Redskins
Next Post

Extra Quotes from My Interview with...
On the Catholic Beat
Related posts from Daffey Thoughts

Catholic
If the Confederacy was the same as Nazi...
Daffey Thoughts

Catholic
Best response to the lunacy of ESPN
Daffey Thoughts

Catholic
Only fools and Catholics think it will end...
Daffey Thoughts