No, You Are Not Really Colour-Blind

Patheos Explore the world's faith through different perspectives on religion and spirituality! Patheos has the views of the prevalent religions and spiritualities of the world.
Recently, there have been several stories circulating about religion and ethnicity that have an implicit view of race. That view is: in North America, people are colour-blind. We do not see colour any more. Unlike our racist ancestors, the fact that we don’t see colour any more means that we’re no longer racist. In fact, to bring up colour in our contemporary society is to risk being called racist. ‘Race’ and ‘colour’ are backward, regressive, conservative terms. We progressive people, we don’t see colour anymore.

But do we not see colour? (I put the ‘u’ in ‘colour’ because I’m writing from Canada, and I have a Canadian article in here. Of course, I am also challenging the view that we don’t see ‘nations’ in North America anymore.)

Let’s start with Canada, with a story that talks about being colour-blind without the religious dimension. In today’s Globe and Mail (Canada’s national newspaper), Carleton University economist Frances Wooley asserts that Canadians should retire the term ‘visible minority.’ The article starts off admittedly well. Wooley says (rightly) that it’s ridiculous to keep saying that ‘whites’ in Canada are a majority against which an ephemeral mélange of ‘visible minorities’ should be compared. Race keeps shifting, she points out, which means that ‘whiteness’ shifts, at times including Arabs (for example), at times not. It’s thus ‘racist’ to keep ‘the assumption that whites are the standard against which anyone else is noticeably, visibly different.’

But it’s as Wooley gets into an economic analysis that the article begins to degenerate into a colourful soup of stereotypes. She argues that a new policy needs to be enacted that targets ‘target truly disadvantaged groups, not the children of doctors and university professors.’ This latter category presumably refers to the children of ‘visible minorities’ who were accepted as highly-skilled migrants by the ‘really good idea’ of the Canadian points system. Rural white boys need more outreach, then, not an urban visible minority. (One wonders what happened to the First Nations, although she does say that indigeneity is not a marker of visible minority; it’s its own category).

For a newspaper that assumes that all Asian Canadians either are or have tiger parents, these stereotypes may be understandable. But they are also unacceptable. After all, instead of doing away with ‘visible minority’ (and thus, doing away with ‘colour’), Wooley is redefining race, not eliminating it. She is assuming that colour does not mean ‘poor’ anymore; it means ‘rich.’  Maybe she should consider reading Philip Oreopoulos and Diane Dechief’s 2011 working paper for the Metropolis Project, a recently finished long-standing coalition of academics and policymakers examining the impact of migration on Canadian cities. In this report, Oreopoulos and Dechief build off research they did in Toronto, Montreal, and Vancouver where equally qualified resumés were sent out with different names, and the ones with Chinese, South Asian, and Middle Eastern names received fewer call-backs than Anglo-Canadian ones. Asked why, employers said that a ‘foreign-sounding’ name was a ‘a signal that an applicant may lack critical language or social skills for the job.’ Are ‘visible minorities’ economically disadvantaged by this? Well, if you ask Oreopoulos and Dechief, they suggest that visible minorities should ‘mask’ their names for better job chances. Seriously?

In short, Professor Wooley, you can’t retire ‘visible minority’ by re-defining it. Canadians still see colour, and it sucks.

Now let’s bring this down south to the Gospel Coalition, an evangelical group in Illinois that is trying to consolidate evangelical theology to stem the Protestant movement’s ideological fragmentation. Their blog reported today from a YouGov poll on results from a survey that correlated belief in heaven and hell to whether people took religion seriously or not. Here’s the chart:

Pulling from the survey data, the Gospel Coalition’s Joe Carter produces some ‘takeaways.’ He finds that ‘Black Americans are more likely (70%) to believe in heaven and hell than either whites (58%) or Hispanics (60%)’ and that ‘Hispanics are much more likely (29%) than either whites (13%) or blacks (15%) to say that people who do not follow their religious beliefs can go to heaven.’ He also titles his article, ‘Catholics More Likely than Protestants to Say Other People Can Go To Heaven.’

What is striking is that these are ‘takeaways,’ not avenues for badly-needed further qualitative analysis that would interrogate what these results actually mean. By ‘takeaways,’ Carter implies that this is data that evangelicals can use to evaluate the state of the seriousness of American ‘religious belief,’ including along race lines. This agenda in turn plays into the Gospel Coalition’s agenda to re-consolidate evangelical theology, making people take ‘religion’ (or their ‘relationship with Jesus’) more seriously.

But this scares the living daylights out of me. The Gospel Coalition doesn’t want to start a conversation about race; it wants to have the last word on race. Black Christians are ‘good’: they believe in heaven and hell. White Christians are getting worse because they’re more ‘liberal’ now. Hispanics are bad: they’re loose, universalistic, and (my, my) might be Catholic. If Michael Emerson and Christian Smith had anything to tell us in Divided by Faith, it was that the state of the race conversation in American evangelicalism is appalling because evangelicals want to believe that they are colour-blind because God does not see colour. This de-colourized ideology leads them to forget that race has structured American society for so long that many colour-blind assumptions (e.g. you shouldn’t live on welfare) are in fact stratified along colour lines. This may be the next episode, then. It seems that blacks (a proper ‘race’ in America) are doing better than non-white/black ‘cultures’ like Hispanics who might have something like cultural baggage that causes them to embrace loose theology. The Gospel Coalition (it seems) has to up its outreach to Hispanics to save them from their theologically loose ways.

In short, people who don’t fit the black-white race continuum now can be conceptualized as theologically loose. We now have to make those people fit the colour continuum in order to solidify their theological convictions. Shudder.

And finally, that brings us to a very interesting New York Times article on the Rev. Gideon Tsang and Austin church plant, Vox Veniae, a story so important that it was shared as an ‘interesting New York Times profile’ by Angry Asian Man. There is a great deal of celebration in this piece about how a church plant from Austin Chinese Church, an ethnic Chinese church in Texas, has successfully attracted ‘whites,’ no small feat for many Chinese churches.

But nobody is paying attention to the words of its pastor, Rev. Gideon Tsang: ‘I’m struggling to have a better understanding of my own Christian heritage, and of my own Chinese Christian heritage.’ Watch the video too: the guy is deeply conflicted about how his church is populated by the ‘transitioning community,’ the increasingly white gentrifying class that is pushing out the historically black and Latino community in east Austin. While people at his church are talking about the thriving mission of Vox Veniae in an arts venue and celebrating how a Chinese church has broken out of its cultural walls, Tsang feels conflicted. Is he really on mission? he might be asking himself. Or is he playing into the gentrification game? He opts for being ‘good neighbours’ to the non-white, working-class, disenfranchised community. But being honest about who he and his church are, he knows that his church is less ‘multicultural’ than it looks; it’s class-stratified, and it’s multicultural only if ‘multiculturalism’ is defined as Chinese people reaching out to white folks.

Pastor Gideon Tsang should be commended for his unflinching honesty. His ambivalence teaches us that nobody is really colour-blind yet. This is why he wants to have a ‘better understanding’ of his ‘own Chinese Christian heritage.’ He’s not being regressive. He’s asking himself the race question. He wants to know if he’s playing into the hands of power or walking in solidarity with the powerless. He’s wondering whether the face of racial diversity obscures a sort of class homogeneity at his church. He wants to know if he’s missing something on the colour question.

And that is why we need to have a conversation about race in religion, or better yet, race in general. After all, not having this conversation means that we are going to give in to that discourse that says that mentioning colour is itself racist, and thus backward and ignorant. But if these articles have anything to show us, it’s that by not talking about colour, we’ll just start talking about it in ignorant ways. If we really claim to be as progressive as we say we are, we owe it to ourselves to have this conversation. Otherwise, we’ll really just be ignorant. 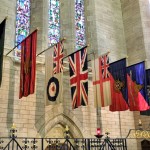