The World Is Watching. #OccupyCentral #HongKong

Patheos Explore the world's faith through different perspectives on religion and spirituality! Patheos has the views of the prevalent religions and spiritualities of the world.
I once wrote on Facebook that if the government cracks down on nonviolent protesters in Hong Kong, the world would watch. I meant that, of course, to invoke the Tiananmen Beijing Spring of 1989: the Party sent the People’s Liberation Army to clear out Tiananmen Square, and the world watched on CNN.

I was quickly corrected. A friend said to me that ‘the world’ really just means the ‘Anglo-American world.’

I have to say that he is correct. I also have to thank him because his correctness is important.

Over the last two days, Hong Kong has turned into a warzone. The People’s Liberation Army hasn’t been called in yet; the militarized presence there is none other than the police. As students who boycotted classes began to strike at Government House, they were met by militarized police who have pepper sprayed them and then more recently thrown tear gas at them as they have retreated into Admiralty, Wan Chai, and Causeway Bay. A Red Cross medical station in Wan Chai was also tear gassed.

The world is watching, the Anglo-American one included. With the emergence of photographs and videos depicting chaotic militarized scenes, I woke up to English-language reports from the New York Times, Time, the Wall Street Journal, the BBC, the CBC, Bloomberg News, and a 10-point explanatory picture timeline from Vox. An English-language video made by one of the students is also making the rounds.

I’ve explained what has happened before, and the Anglo-American media seems to be doing its job, and the South China Morning Post has an ongoing timeline, so I’m glad to be spared of the grunt work. It’s needless to say that the violence perpetrated by the militarized police likely on the orders from Hong Kong government (read: Chief Executive Leung Chun-ying) has resulted in a crisis of legitimacy for the government. As Joseph Cardinal Zen pointed out from the front lines, ‘It’s very clear that no dialogue could be made with this regime after today’s happenings…We do not want to see anyone get hurt. A victory with sacrificed lives is not a victory. Today we have sent out a very clear message … [but] we have witnessed an irrational regime. Please go home! There’s nothing we can talk with [the government about].’

Everybody thinks the retired Cardinal is right about the government’s (il)legitimacy, but it seems that few have listened to the Cardinal to go home. In fact, since Zen uttered these words, the protests seem to have grown. Sure, there are nuances among the protesters — some, for example, are unhappy that Occupy Central has in effect claimed the students’ movement as its own — but the fact is that since the Cardinal said what he said, the protests have not died down, but spread. The actions will grow as well. The Professional Teachers’ Union has issued a statement that it will enact a teachers’ strike — an action that should put to rest any claim by British Columbians that opposing the teachers’ strike is a Chinese culture thing.

But if it is specifically an Anglo-American world that is watching, then what is happening in Hong Kong is serious indeed. Whatever the student in that video says about how those in the Anglo-American world were born into democracies, those of us who live in places that are called ‘democracies’ know that our democracies are eroding. Indeed, in the light of corporations having free speech being established in Citizens United, we witnessed the first ‘Occupy’ — ‘Occupy Wall Street’ — which, while having nothing to do with Occupy Central with Love and Peace, also pointed out that money in politics skewed ‘democracies’ into the direction of the conglomerate rich. We also saw this in the militarization of police in Ferguson, with the constant spin that the demonstrations for justice for Michael Brown were to preserve a sort of secure economic order that the peaceful protesters were disrupting. In the United Kingdom, it’s become clear that the economically conservative politics of David Cameron are precisely what’s motivating the official British government’s support for China’s policies. In Canada, we’ve worked with a government that operates with very strict message control — so strict that a recent trade deal between China and Canada has gone under the public radar — and we remember that just one year after the 1989 Tiananmen Beijing Spring, Canada called in tanks to attempt to break a First Nations barricade in Oka.

The question is why — if such violence in Hong Kong and Tunisia and Egypt and Syria and even the Gaza Strip can delegitimize these governments, and if even the violence perpetrated by the Islamic State calls its statehood into question — why is it that when the same economic logics that govern those regimes are called into question in the Anglo-American world, those Anglo-American states survive? It turns out, then, that if the Anglo-American world is watching, we are not watching something going on over there. We’re watching something that happens here too — here, where our analysis centers on the racial politics around indigenous groups and African American bodies and is respun toward legitimizing white privilege. It’s here that the racial dynamic enters into the final analysis. As long as we keep Hong Kong as over there, and the Tiananmen Spring as something that happened over there all the way back when, then it’s something that they have to deal with.

But if we recognize that they are in fact us, and that their quest for political agency is our our quest to rediscover political agency after the private consensus, then perhaps it won’t be the Anglo-American world that is watching. The world will watch what the world has wrought. The secular is watching the consequences of its private consensus. And those who are the least among us — the students, the academic faculty pinched by the market, and the clergy in solidarity with the poor — will lead us out of the unraveled private consensus into new imaginations of how public life might work again. 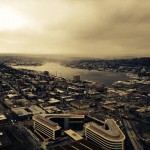 September 29, 2014 It has always been the students - and the clergy -- and Catholic social teaching #HongKongProtests
Recent Comments
0 | Leave a Comment
"I can't believe you would consider the theological lightweight Kilby as a proper critique of ..."
antoniodec Fiat mihi secundum verbum tuum: on ..."
""Milbank criticizes Balthasar for being apolitical in his aesthetic reflections, and I can see how ..."
antoniodec Reading Sobrino on Óscar Romero and ..."
"the word is receptive, which has nothing passive about it but could be the most ..."
antoniodec Fiat mihi secundum verbum tuum: on ..."
"One can never "go home," not in this life."
billwald I’ve found my way home: on ..."
Browse Our Archives
Related posts from Eastern Catholic Person