A Prophet Among Saints: Moses in the LDS Scriptures

How many of those among us are capable of conjuring up a mental image after reading the venerated name of the prophet Moses? It is not an arduous task for most; the ancient lawgiver is well embedded within the minds of us westerners for he is a truly praiseworthy figure gleaming seemingly endlessly from the holy books of all three of the world’s most visible Abrahamic religions: Judaism,

Christianity, and Islam. But determining just how impactful the Israelite leader has been to adherents of other faiths is a far greater challenge. Truly, the sea-parting pikestaff wielded by the prophet possesses a tenacious root system, one that branches out and plunges deep into the history of western religious tradition.

Beginning with this entry, I shall attempt to clarify the significance that Moses maintains within three distinct Abrahamic traditions: Mormonism, the Baháʼí faith, and the Rastafari movement–all youthful in comparison to the aforementioned trio. My explication will rely heavily upon the canonical texts sustained within each of the religions presented and the distinct hue of each Moshe will act as the cornerstone of my discourse.

When speaking of the body of contemporary Abrahamic movements that emphasize the great magnitude of Moses, one mustn’t fail to mention The Church of Jesus Christ of Latter-day Saints. Emerging out of upstate New York in the early nineteenth century, Mormonism began under the direction of Joseph Smith and emphatically proclaimed itself as the One True Christian Church, having restored the faith to its intended structure.

As far as sacred writings are concerned, Mormons uphold the canonicity of both the Hebrew Bible and the Christian New Testament–despite discrepancies with traditional Catholic, Protestant, and Orthodox Christian doctrine–and supplement these writings with additional scriptures that are unique to the Mormon faith.

One such opus is the Doctrine and Covenants; a series of documented revelations experienced by the great architects of the LDS movement. The D & C contains an amalgam of authoritative entries and occasionally references the heroic prophet in question when reaching for an exemplar whom effectively wields certain ideal characteristics.

The collection of ancient American prophetic writings known as the Book of Mormon takes a similar stance with regard to the inclusion of the great Israelite, and the Pearl of Great Price even contains an entire book that is aptly entitled the “Book of Moses.” I will take a closer look at each of these three texts in the paragraphs that follow.

It goes without raucous insistence that the Book of Mormon is firmly situated as the towering scripture within the LDS church and one needn’t look any further than the first book of the text to read its first mention of the Israelite redeemer.

In 1 Nephi, the author invokes the Torah’s account of Moses with the following words: “Therefore let us go up; let us be strong like unto Moses; for he truly spake unto the waters of the Red Sea and they divided hither and thither, and our fathers came through out of captivity, on dry ground, and the armies of Pharaoh did follow and were drowned in the waters of the Red Sea.”[i]

Here Nephi uses the exodus narrative to exhort his elder siblings, reminding them of the monumental strength that the Lord had exhibited when He delivered His people out of the hands of their oppressors and portrays Moses as a divinely enlivened figure through which the God of Israel worked to save His most prized possessions.

The narrator’s kin, Laman and Lemuel, were distressed by the task at hand–to overcome Laban and to obtain the brass plates that were in his possession–and so needed their brother’s encouraging words that spoke of God’s faithfulness and of Moses’ uprightness. By utilizing this archaic tale, Nephi successfully conveyed the conviction that the Israelite lawgiver was that of an idyllic man who is worth conforming oneself to the image of and additionally foreshadowed the fulfillment of his own prophetic calling.

Including an utterance about Moses at the very beginning of the Book of Mormon is irrefutably compelling; it cements the prophet’s place as an archetypal figure within the LDS Church and hoists him up as an icon for Saints to glimpse when seeking strength and inspiration for as long as the book is held by the Mormon faithful.

The volume of Mormon scripture known as the Doctrine and Covenants makes use of a method not unlike that of the Book of Mormon when handling the prophet whom we are discussing. By relying on the assumed dignity of Moses that indwells the hearts of Mormon believers, this compilation of chronicled revelations uses the biblical figure to effectively validate LDS doctrine.

Once again, the Israelite is depicted as an ideal Saint in which modern worshipers and church leaders alike should look to as a model of piety and authority: “And again,” reads the D & C, “the duty of the President of the office of the High Priesthood is to preside over the whole church, and to be like unto Moses–behold, here is wisdom; yea, to be a seer, a revelator, a translator, and a prophet, having all the gifts of God which he bestows upon the head of the church.”[ii]

Here Joseph Smith exalts the Israelite leader and seeks wisdom from his life, looking to Moshe for support regarding church practices, including that of plural marriage. He records: “David also received many wives and concubines, and also Solomon and Moses my servants, as also many others of my servants, from the beginning of creation until this time and in nothing did they sin save in those things which they received not of me.”[iii] Moses–along with several other biblical heroes–carried out a polygamist approach to marriage as ordained by God, implying that good Mormons could and possibly should do the same if they are to hold fast to the primacy of scripture.

In an inspired act contrary to that of previous LDS instruction, “Joseph Smith issued a revelation on July 12, 1843, that made plural marriage a religious practice of the early Saints,”[iv] a divine epiphany that was first recorded in the text now being considered. The LDS Church, through the prophetic pen of Smith, transitorily instituted polygamy amongst the Mormon faithful and it was the spiritual attainment of the great prophet Moses that the Saints pointed to as proof of the divinely-permitted nature of the practice.

Despite all of what has been mentioned thus far, it is perhaps within the Pearl of Great Price that Moshe’s importance within Mormonism is most clearly spelled out. This canonical text contains an assemblage of works by Joseph Smith including: a revision of the “Gospel of Matthew,” an autobiographical extract from the life of Smith, the “Mormon Articles of Faith,” the “Book of Abraham,” and the “Book of Moses.” I will dedicate the remainder of this series segment to the latter of those works.

In the “Book of Moses,” the prophet Joseph Smith dictates “an account of some of the visions and writings of” the Israelite lawgiver;[v] the text focuses on the creation account and includes a sampling of Smith’s translation of the book of “Genesis.” In the first chapter, God speaks to the ancient prophet: “And I have a work for thee, Moses, my son; and thou art in the similitude of mine Only Begotten; and mine Only Begotten is and shall be the Savior, for he is full of grace and truth; but there is no God beside me, and all things are present with me, for I know them all.”[vi]

In this passage–and others like it–we are given a uniquely Christological interpretation of God’s revelation to Moses, asserting the prophet’s awareness of the New Testament figure Jesus and of His significance within the Church of Jesus Christ of Latter-day Saints. Smith, through this inspired offering, discloses new information about the biblical figure in question and consequently reinforces the traditional notion that the LDS Church is indeed the One True Church restored; he confirms for Mormons that the Moshe of the Hebrew Bible is none other than the authentic Moses–the Moses of the Saints.

To learn more about the significance that Moses enjoys among Baháʼís, check out next week’s installment.

About Jordan Bennett
Jordan Bennett is the Director of Worship Music at Cedar Grove Baptist Church in Shepherdsville, Kentucky, a University of Louisville School of Music alum, and the founder of The Church in Dialogue—an ongoing series of conservative ecumenical panel discussions hosted at Cedar Grove. You can read more about the author here.
Previous Post

June 20, 2022
Beyond the Amazon: Santo Daime and Ayahuasca
Next Post

June 3, 2022 The Prophet As Mirror: Moses in the Baháʼí Faith
Recent Comments
0 | Leave a Comment
Browse Our Archives
Related posts from Essence of the Altar 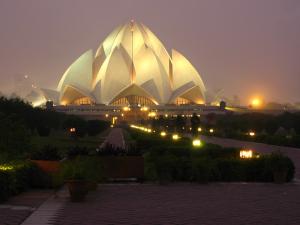 General Christian
The Prophet As Mirror: Moses in the Baháʼí...
Essence of the Altar