Get updates from Old Things New delivered straight to your inbox

Mary’s Magnificent “Yes, And!” (Or: Submission is Overrated)

I sat on the couch across from my spiritual director, looking at the painting of the Annunciation. Mary is sitting on her bed, white bedclothes gathered and spilling onto the floor, and a bright light filling the room. She looks so gentle and submissive. Submissive Sister Mary. I never really felt very kindred to Mary as a kid. I’m big, and noisy, and never had the “gentle and quiet spirit” that some parts of the Bible seem to be annoyed I can’t emulate.

Mary didn’t seem like someone I would have been friends with. She’s known in church lore for how willing she is to do whatever God says, and to do so very meekly.

“I am the maidservant of the Lord!
May it be done to me according to your word.”

I stayed in a monastery in England during Lent one year. It was five weeks of silence and praying and eating very little food and being cold all the time. I was coming back to religion after a dark winter away from it, and I every time I walked into the chapel, I looked at the icon of Mary hanging over the Table, and crossed myself with icy cold holy water and whispered,

“I am the maidservant of the Lord.
May it be done to me according to your word.”

I was trying to be more like Mary, but it was hard. I was trying to be very holy, trying to find my way through the dark back to something I used to call Jesus. I was trying to submit. Submission, to me, modeled after Mary, meant the self giving way to the Self of God. I thought that the more I was following Jesus, the more that I would disappear, like a mist dissolving under the sun. The light of Christ would shine, and my personality would melt under the heat. I trying to erase myself in the hopes that as I rubbed at my selfness with this eraser, I would start to rub away the ink splotches that I used to call me and would end up entirely erased and entirely clean. I would be fully God’s. I would be fully not-myself.

I am the maidservant of the Lord.
May it be done to me according to your word.

This all churnes through my mind as I sit on the couch across from my spiritual director, looking up at the painting of Mary. Her eyes are downcast, and she has delicate hands and delicate facial features. I feel tacky and awkward, trying to be as peaceful as Mary but feeling like a clunky troll under a bridge.

She laughed. She laughs easily. She’s wearing a flowing skirt and dangling necklaces and the candle is lit between us, her own warm Maryness flowing out and over and around her and I am sitting here on the couch like a bulky, bleating ogre.

“Maybe God doesn’t have a next step planned. Maybe God is saying, surprise me,” she said.

But Mary’s Magnificat is nothing if not creative.

The Magnificat is Mary’s creative, total selfness bubbling out the moment after she says yes to God.

The Magnificat is Mary becoming fully herself in her expression of “yes” to the world.

The Magnificat is Mary becoming brave enough belong fully to God and fully to herself at the same time.

We think of spirituality as a one-person show. We think that it’s like stand-up comedy – it’s either God on stage (which is good) or us on stage (which is bad). Submitting to God means that we get off the stage. But a healthy spiritual life is more like improv – a lot of people, all playing together, all submitting to each other’s ideas and creativity, and everyone adding on with a constant affirmation and addition, fully ourselves and fully present to everyone else.

Mary doesn’t get off the stage after she says yes to God.

She stays up there with God to sing a new song. She dives into old Hebrew Scriptures (hints of Hannah’s song and the prophets) and weaves together something so old but so new, entirely hers and entirely God’s. Mary sees what God has done for her, and interprets how it is part of the story of redemption for all people.

Mary spins stories with her “yes.”

We say yes, and God Godself holds Her breath in joy to see what we’ll do next.

God is just waiting for us to surprise Her.

I used to think that Mary’s yes erased her. I thought it was submission at the cost of her creativity. I thought her “yes” showed how little her own life, her own words, her own plans, matters. This is how the Church has always read Mary, and my male-written commentaries this week talked mostly about how damn obedient Mary is. This interpretation comes weighed with non-consensual spiritual violence. At any moment God can break into time, and change your whole life, and all you can say is “yes.”

But the Magnificat is a holy, bellowing, delighted, dancing “and” that comes after the gentle, sacred yes of Mary.

Mary submits like an improviser submits to her colleagues – she accepts the radical premise with delight, says a giddy “yes” to what blew in the window out of nowhere (an angel! An angel in my bedroom! A baby that will save the world! I’ve never even had sex! I’m like Hannah! The world is going to be redeemed, I’ll bet! And me, I, I am in this story in the weirdest and most wonderful way!) –

and then Mary sings – and! and!

But the most radical thing about the Incarnation is that God says “Yes! And!” to us, too.

What blasphemy is this? God submitting to humans?

[This is] the most central themes of Scripture itself: God stoops. From walking with Adam and Eve through the garden of Eden, to traveling with the liberated Hebrew slaves in a pillar of cloud and fire, to slipping into flesh and eating, laughing, suffering, healing, weeping, and dying among us as part of humanity, the God of Scripture stoops and stoops and stoops and stoops. At the heart of the gospel message is the story of a God who stoops to the point of death on a cross.” – Rachel Held Evans, Inspired

Christmas is God’s invitation to join God in working for the redemption of the earth. God isn’t pushing us off the stage, God is on the stage with us, and when we say yes! and! to God, God laughs and sings and says yes! yes! and! back at us. We play at improve with the Divine, we sing jazz with the Lord of Hosts. The chorus loops back and forth, repeating with a different riff, harmonies and melodies swapping in the sacred counterpoint of the redemption of the earth that God has invited us into. Maybe there’s a half-breath when the lines between self and God blurs – but only because we have been so fully ourselves first. There’s no violence in this submission. There’s no coercion in this submission. This is the free, creative submission of the sacred “yes, and.”

This is grace – that God would love us enough to draw us in again and again, but still leave us intact and still fully ourselves.

This is grace – that God would burst into time, into our Monday afternoons, and ask us to join Him with our full selves – our full surprising, creative, human selves.

God waits delightedly to see what we do next with the calling we have been invited into. God is longing to hear how we weave old stories into new stories, in the song that we sing after we say yes to the in-breaking of God in our world.

“My soul magnifies the Lord,
and my spirit rejoices in God my Savior,
for he has looked on the humble estate of his servant.
For behold, from now on all generations will call me blessed;
for he who is mighty has done great things for me,
and holy is his name.
And his mercy is for those who fear him
from generation to generation.
He has shown strength with his arm;
he has scattered the proud in the thoughts of their hearts;
he has brought down the mighty from their thrones
and exalted those of humble estate;
he has filled the hungry with good things,
and the rich he has sent away empty.
He has helped his servant Israel,
in remembrance of his mercy,
as he spoke to our fathers,
to Abraham and to his offspring forever.”

I’ve written about Mary every year for Advent – swing by my blog, In/Between, to check out my two other pieces!

A Feminist Advent [Or: That’s What Advent Always Is]: “One of the most radical things about the Magnificat is that a woman sings a universal song.”

Mary Consoles Eve [Two Voices]: “That ridiculous Christmas song that jars me every year – Mary, did you know? – is terrible not just because it’s silly and mansplainy and infantilizing Mary, but because the most wonderful thing about Mary is that she does know. She’s a co-conspirator in this Redemption plot, and she has said a holy yes to it. In this painting, Mary knows it all, too. Mary knows that Eve has broken something very beautiful. But Mary is not worried. Mary feels redemption in her body the same way that Eve feels shame in hers. Mary knows that it is going to be made not only OK, but right. My soul magnifies the Lord, she whispers to Eve. The rich he has sent away empty.”

December 15, 2018
To My Tired, Self-Righteous Ones: Advent Repentance
Next Post

December 30, 2018 You Don't Have to Fake It: Lamenting at the Christmas Feast
Recent Comments
1 Comment | Leave a Comment
Browse Our Archives
get the latest from
General Christian
Sign up for our newsletter
Related posts from Old Things New 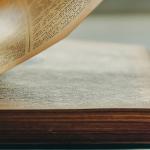 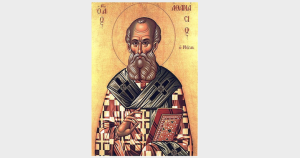 Origen of Alexandria and the Gift of Scripture
“Origen is the whetstone of us all.” —Gregory of Nazianzus Origen's Controversial...
view all General Christian blogs
What Are Your Thoughts?leave a comment
Copyright 2008-2021, Patheos. All rights reserved.