On Being a Holy Mother

In whom we live, move and have our being,

This is the beginning of a prayer I learned from T Thorn Coyle just before becoming pregnant with my first child. It is only a slight twist on a biblical verse Acts 17:28 with which I was already familiar. As a religious studies scholar, whose work focused on women in religion and Mariology (the study of the Virgin Mary) theories of the divine feminine were important to me academically and personally. I’d always regarded God, The Divine, the Great Whathaveyou, as gender neutral or, more precisely, beyond gender. But again, that was all very theoretical. The Holy Mother prayer was asking me to outright pray to God as Woman, as Mother. I was a little uncomfortable with this, knowing that often Goddess language was just as restrictive and fraught with dynamics of power as God language. But once I got pregnant all the pieces fell into place.

As a woman growing her child inside, I was the Mother in whom my child lived, moved, and had its being. As far as my embryo/fetus/child knew, my body was the entire universe. My whims, my choices, my biological processes determined its development. There was no life for this child without me. It moved inside me, it came into being, and after its allotted time, my child emerged from me. I birthed my son into being, not just with my body, but with my will, my passion, my soul; no part of me did not create my child. For those first few months, often called the fourth trimester because the baby’s needs outside the womb remain similar to the needs inside it, I continued to be my son’s entire world – his safety, his nourishment. My son’s separation from me, physically and emotionally, into the world as his own person was a gradual unfolding for us both.

The metaphor can be extended, I think, losing only some of its primal force, to the entire act of parenting (in which we sustain and direct and nurture those lives out in the world) and also to men, because they too hold half the required properties needed for the creation of life. But I can’t speak from a male perspective on this prayer, only from my very definitely cisgendered female body and the oh so primal experience of being one, in metaphor if nothing else, with the Holy Mother.

If I am the holy mother in which my kids lived, moved, and had their being, emerging from me into the world, where does the returning fit in? For once we are born there is no returning to our mothers’ physical wombs. We exist in every moment, in all times and places, in the Holy Mother – we continually live, move and have our being in the Her; at death we return to the Her (or at least in theory, as I’ve never done so in practice). I think in our hearts we are constantly returning to our mothers. Ideally as healthy adults we are secure in our parts (the tripart soul) and move out into the world well nourished. Many of us aren’t fully nourished and I believe parts of our souls long for the safe, loving embrace of a comforting mother. As a parent of young children I am continually returned to. My son ventures out, gaining more independence and confidence, but rushes back to me to share his successes, to gain comfort when sad or upset, or when he’s feeling uncertain about the big world out there. And sometimes he just needs his nose wiped.

This may sound egotistical and self-important at first. Who am I to compare myself to God, the Holy Mother, the Ultimate Being? Well, I am a holy mother. I am not THE Holy Mother, but the process of gestating a new life brought me flesh to flesh with the mystery of creation in a way that no text, mystical, scientific or otherwise, has ever done. I am the great ground of being. Life emerges from me, whole and complete.

Becoming a mother has helped me gain insight into what was once just a theoretical bit of theology. No more. This prayer is embodied in my whole self. I see this prayer as the fabric of my being and my day. It speaks lived truth, it uplifts me, and it reveals to me that I am the holy mother; that She is not so far from me. And perhaps She is not so very distinct from me, either. I am her child, born in Her, living and moving in Her, perhaps at death to be birthed into yet some other new life, still living and having my being in Her. But while on this earth She and I share the act of creation, of being, and Motherhood. 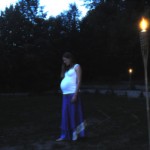 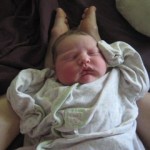