The crisp cool air of autumn is in the air, and with Halloween around the corner the airwaves are full of stories about vampires, werewolves, demons, ghosts and zombies (and oh how I have been waiting for AMC’s Walking Dead series). Of course the cultures that comprise the Northern Tradition were certainly known for their own stories. Even quintessential American literary classics like Washington Irving’s The Legend of Sleepy Hollow have their roots in Germanic folktales and beliefs. There is something about that tale in particular which seems to derive from an aspect of the Wild Hunt afterall, which is said to roam in some areas from the time of Winter Nights (which is upon us) to Yule.

There are numerous accounts in the Eddas and Sagas that talk about the undead, and attacks by them which intensify as the days shorten and the nights lengthen. In fact while there were afterlife beliefs, there was also a belief that the dead corpse was empowered and given a pseudo-life within the grave. These grave mound-dwellers were known as haugbui, their rein of influence was usually limited to their barrow and they’d only attack those who trespassed. The undead you really had to worry about were the undead who could roam far away from their grave-mounds:  the draugr or aptrgangr. While they smelled of decay, could spread pestilence, and had the color of death about them, their bodies often times were described as not being corrupted with decay. In death their bodies had swollen (not with gas or bloating, which is a natural process of decay) but rather with new girth and dense mass that they would use to crush their victims to death.They were also characterized as having super-human strength, ferocious teeth and fierce claws. In some accounts they also possess other powers (aka trollskap) such as: the ability to swim through earth and solid stone, precognition, weather-magic, darkness-calling, and shape-shifting (animals, trolls, etc.). 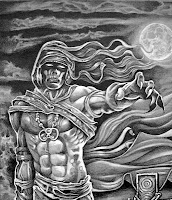 Draugr may roam on the land, or in the sea. Considering the sea-faring nature of the Norse and the staple food that fishing providing for these ancient peoples, there is no wonder that there are also stories about the undead in the water who originated from the mariners who died at sea. Ghost ships fall into this category as well with a particular folk tradition of a draugr in oilskins sailing in a half submerged shipped.

In my personal opinion, stories about vampires and werewolves, shifting from animal to human states has partial roots at least in this ancient culture’s beliefs both with the berserkergang (wolf/bear skin cultuses) as well as with the shapeshifting descriptions of the dead. It would not surprise me that the origin of the vampires keeping native soil in their coffins, derives in part from the traditions of grave-mound dwellers. In modern-day Norway, the term they use for vampire trnalsates to bloodsucking draugr.

We know in Anglo-Saxon England, that when someone inherited land they had to identify the burial mounds and name the inhabitants of them in order to inherit. This no doubt was to help reinforce the need to deal appropriately with the dead, including one’s ancestors, by showing them their due respect.  Properly honoring the dead no doubt helped to curtail any unfavorable activity from the undead. If you gave them proper offerings, and were careful not to offend them or violate their graves then you had little to fear. But for those who would grave rob you might meet not only the discontented haugbui but also the dead’s mother, called a ketta which was described as a fierce she-cat. There are a few academic articles, which analyze the Beowulf monster by connecting it to the ketta tradition.

Just as archaeologists have discovered that some persons were buried with bricks in their mouths for fear that they were vampires in other cultures, there are unique burial folk traditions among the Scandinavians that were used to keep the dead from walking. Unfortunately many of these examples come after the conversion to Christianity. So we’re not sure how old some of the customs are, or what their pre-Christian counterpart may have been. Some of these folk traditions included burying an open pair of iron scissors laid across their chest, placing an arrangement of straw or twigs under their shroud, using needles to pin their feet in place, big toes were tied together, and the dead would be carried to their grave in a way to disorient and confuse them, with people walking around the corpse to hide their view.

If you did find yourself with a roaming undead harassing you, you needed to find someone who was courageous to wrestle the undead back to its grave. While iron may slow it down and injure it, it could not ultimately kill it. When simply returning the dead to their grave would not suffice, the warrior would have to decapitate the body, burn it, and then scatter its ashes in the water so it could not re-assemble itself to return.

So what do we take away from this? That the dead should be treated with a wary respect, for they have the ability whether out of being wronged, or through perhaps jealousy to strike out. When they are disrespected and trifled with the consequences can be most serious indeed.

Some of the stories in lore that talk about the undead:

October 27, 2010
The Silly Season: Witches, Politics or Both?
Next Post

October 29, 2010 The Love of Community
Recent Comments
10 Comments | Leave a Comment
Browse Our Archives
get the latest from
Pagan
Sign up for our newsletter
POPULAR AT PATHEOS Pagan
1

Summoning Hekate and Her Four Sovereign...
Keeping Her Keys
Related posts from PANTHEON

Pagan
Archiving Our History Before We Lose It
PANTHEON