Parenting: The Importance of Understanding Dianetics (Part 2) May 1, 2012 scientologyb 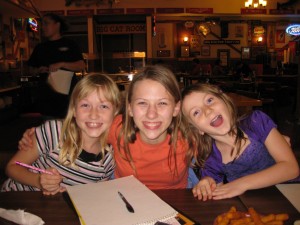 Dianetics has so many uses within the family. Many have been covered in articles on the Scientology Parent website: how to handle injuries, calm and quiet birthing, assists to help moms during pregnancy and after the birth, etc. Yet in some ways this only scratches the surface of the use of this subject.

My last post on the subject centered on the value of knowing Dianetics to know what you’re looking at when kids (or your spouse) is acting up.   The next part of the picture is:

Ok, so now I know the kid is just being reactive, and it isn’t really them. Now what? Well, sometimes that depends on the situation–sometimes it’s simple and sometimes it takes a little cleverness. But isn’t that parenting?!

However, here are a few of the ways that my parenting is influenced by my understanding of Dianetics and the reactive mind:

The reactive mind tends to kick in more easily when a person is hungry, tired, or a little ill. So with kids, one of THE easiest and simplest handlings can often be to just get some decent food into them or get them some rest. It’s amazing how different the child can behave or respond with just these very simple things handled.

Also, if they are in the middle of being reactive, it’s not necessarily the right time to try to correct them on something, teach them something, or get into these big discussions, particularly if you’re upset yourself. The truth is they’re not totally there and listening and able to really receive what you’re trying to get across anyway. So I usually just skip it, until they are out of the drama and are more themselves and we can have a real communication about it (if needed).

If there is something I need to handle or get done with the child while he’s in the middle of this drama, I appeal to the person himself and the analytical side as directly as possible, ignoring the rest as much as I can. You might say that the person is still there, but he’s a bit “buried” at the moment with whatever has kicked in. I go on the assumption that the person himself CAN overcome the reactive mind and take the reins more, at least to some degree. I always try to grant strength and importance to my child’s rationality and ability, NOT their reactive mind. For example, sometimes one of my kids will be “Rowr-rowr-rowr-howl!”, and it’s not handling with regular communication. So I might say, “Hey, honey, I realize that your body is probably hungry, and sometimes that can make us feel upset. I’m in the middle of making breakfast, so we’re going to handle that very shortly. But while I get breakfast ready, I need you to go ahead and just handle yourself and get your body dressed. I know you can do that. So you get dressed, and by the time you’re done, we’ll eat.” Or let’s say one of my kids is yelling at me or being sassy or rude. I have rights too, and I don’t treat them this way. I might let them know, “Hey, I don’t know exactly what’s going on right now, but this isn’t you. You are a very nice person, and usually really great and cheerful. The way you’re treating me right now is not okay. I don’t treat you that way and I expect you not to treat me that way. So whatever is going on, I need you to handle it. Get some food, take a walk, go lay down for a while, do something fun, or whatever you need to do, but I need you stop acting this way with the family.”

If I’ve asked them to do something and they are fighting me or being dramatic, and they just don’t respond to my appeals, logic, or communication, I just try to stay relatively calm and get them to do whatever I told them to do. First, I just acknowledge whatever they have to say and repeat whatever I told them to do, multiple times as needed until it gets done. (Then when they do it, thank them for doing it!) If I still can’t get it done, I move their body for them if required. Let’s say the kid is throwing a wall-eyed fit and just won’t knock it off. Well, then pick her up, take her to her room, set her inside, let her know you’d be happy to have her come back and join the family when she can settle down and be more herself, close the door and walk away. Do it as calmly as possible–you’re the one setting the example of proper behavior with others, so getting angry, screaming, and being reactive yourself isn’t usually helpful. Let’s say the kid continues to refuse to brush her teeth. Well, let her know you understand that she doesn’t want to (or whatever she might have said), but that we need to take good care of our teeth so they keep working right. Then just guide her gently into the bathroom and put the toothbrush and toothpaste in her hand.

We’ve all had some moment (or several) where we’d like to throw the kid out the window, so to speak. With a better understanding of people and the mind through Dianetics, I’m usually successful with finding a rather better solution. : )

Stephanie Croman is a Scientology counselor in Austin, Texas. She has three wonderful daughters. When she is not helping others or doing things with her kids, she is often helping herself to a good book or trying to somehow make a dent in all the movies in her Netflix queue.