Protesting the Drugging of Our Children

Protesting the Drugging of Our Children May 8, 2012 treeves 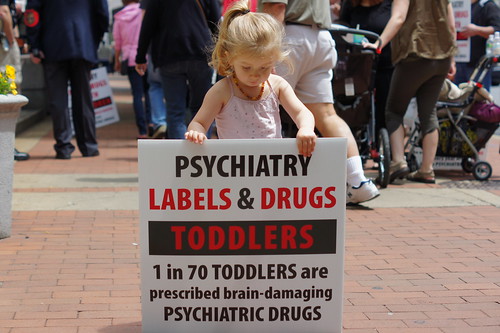 Don’t you dare drug my daughter.

If there’s something that should have been abundantly clear by now, it’s the fact that I’m 100% opposed to the practice of labeling and subsequent psychotropic drugging of children.     At its core, it is the world’s most-effective marketing sham, and too many parents fall for it.

The American Psychiatric Association held their annual marketing pitch to “doctors” in Philadelphia this year, and my family lent their voices to the many up there that came to demonstrate at the convention center and make it known how we feel about it.

Protest against Psychiatric Drugging of Children in Philadelphia – May 2012

Psychiatrists recently released their Diagnostic and Statistical Manual V – which literally is simply an eloquently-worded bunch of random observations about every facet of human behavior, compiled in such a way that psychiatrists can point at amazing-sounding illnesses like Nicotine Use Disorder for smokers, “Caffeine-Induced Sleep Disorder” or even “Complicated Grief Syndrome” for if you’re bereaving the loss of a loved one or pet dog.  Any of these are simply then used as a ticket to push more drugs.  Watch this video about it. It’ll open your eyes.

Because psychiatrists could never come up with a root cause for man’s ills – they’ve instead fallen back to just describing phenomena they see in people, and then prescribing drugs as “treatment” to mask one from that phenomena.

Unfortunately, this practice is not only a money-grabbing lie, it’s totally destructive.  Psychiatric drugs are responsible for the real-life version of the Reavers from Joss Whedon’s Firefly / Serenityshows.   They simply mask reality from a percentage of users, and for another percentage, they cause TERRIBLE side-effects, from physical disability & derangement to suicide, school shootings and soldiers going on insane killing sprees.

So, if it wasn’t clear before, let me make it clear now – if someone ever ever attempts to label the normal behavior of my children and push them onto mind-destroying drugs – Lord help them.

Based in the Washington, D.C. Metro area, Tad Reeves is a Linux system administrator, mountain biker, husband, father of two, and lifelong Scientologist. He’s written hundreds of articles on the subject of Scientology as it relates to parenting and family, as well as various commentary on the Scientology religion.

Home
Why Religion Matters: Commentary by a Scientologist
Scientology Beliefs