Edward Pentin tweets on March 16 that the threatened “correction” of Pope Francis over Amoris Laetitia is still a threat. “Informed sources” tell him this. Oh goody. Cardinal Burke was the first to threaten this queer thing, and Lysergic Acid News could barely wait. “How soon? How soon?” it asked with insufferable impatience. How very inconvenient, then, when Cardinal Muller, the prefect of the CDF, rejected any such thought as Burke’s. It “harms the Church,” said Muller, to speak thus.

Well, yeah, and there’s no such thing in Catholic tradition as a “formal correction” of a pope. The pope is the Church’s supreme teacher and supreme legislator. As Vatican I puts it, the pope has “supreme power … in governing the whole Church.” He is “the supreme judge of the faithful.” He is “not subject to revision by anyone.” “They stray from the genuine path of truth,” says the Council, “who maintain that it is lawful to appeal from the judgments of the Roman pontiffs.” The pope has “supreme power of teaching.”

Who, then, can “correct” the supreme judge and the supreme teacher? According to Vatican I, no one:

Both clergy and faithful, of whatever rite and dignity, both singly and collectively, are bound to submit to this power by the duty of hierarchical subordination and true obedience, and this not only in matters concerning faith and morals, but also in those which regard the discipline and government of the Church throughout the world. … This is the teaching of the Catholic truth, and no one can depart from it without endangering his faith and salvation.

Then, in response to Mr. Pentin’s tweet, a canon lawyer, Fr. Manuel J. Rodriguez, got involved. 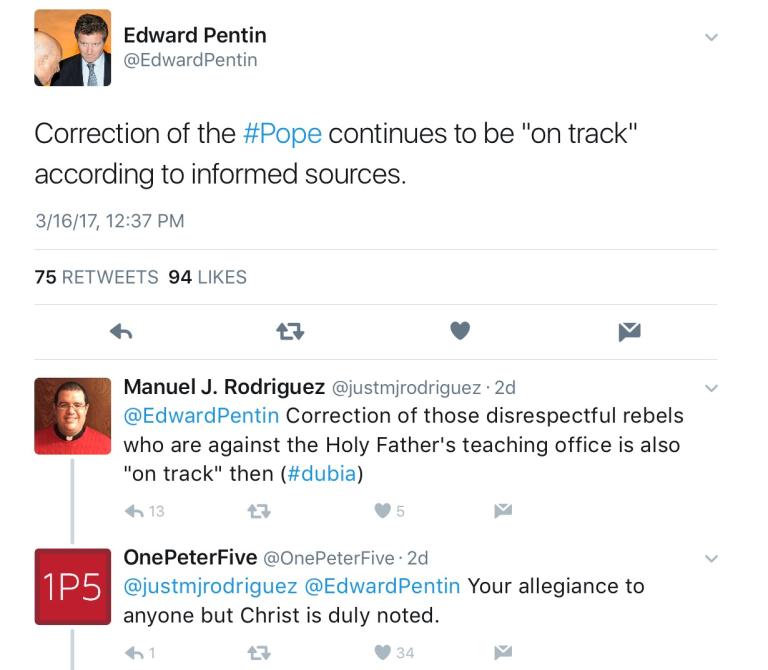 Naturally, the venomous interloper 1 Luther 5 was not slow in interjecting its own false dichotomies that might have come from the wery mouth of Luther himself at the Diet of Worms. Mr. Skojec’s conscience is captive to the word of God, and all that yada yada.

But no. Allegiance to the pope is allegiance to Christ. To posit a conflict between the two is to do what the Protestants did.

In Luke 10:16, Christ says to the apostles—but before I go there: You do realize, do you not, that Catholic bishops are the successors of the apostles? If you have any doubt about that at all, let us get that resolved before we go any further. Catechism 101, dear reader:

In order that the full and living Gospel might always be preserved in the Church the apostles left bishops as their successors. They gave them their own position of teaching authority.” Indeed, “the apostolic preaching, which is expressed in a special way in the inspired books, was to be preserved in a continuous line of succession until the end of time.” (77)

The Catechism there is quoting from Dei Verbum. So the teaching authority of the apostles is passed on to bishops for all time. Bishops teach with the same authority as the apostles. This we must know.

And we must know that the pope is the successor of Peter, and Peter has primacy over the rest. Catechism 101 again:

881 The Lord made Simon alone, whom he named Peter, the “rock” of his Church. He gave him the keys of his Church and instituted him shepherd of the whole flock. “The office of binding and loosing which was given to Peter was also assigned to the college of apostles united to its head.” This pastoral office of Peter and the other apostles belongs to the Church’s very foundation and is continued by the bishops under the primacy of the Pope.

882 The Pope, Bishop of Rome and Peter’s successor, “is the perpetual and visible source and foundation of the unity both of the bishops and of the whole company of the faithful.” “For the Roman Pontiff, by reason of his office as Vicar of Christ, and as pastor of the entire Church has full, supreme, and universal power over the whole Church, a power which he can always exercise unhindered.”

Here the Catechism quotes from Lumen Gentium. The biblical basis for this teaching is Matt. 16:18 and John 21:17. So all bishops are successors to the apostles and teach with the same authority; and the pope is the successor to Peter and teaches with supreme authority among bishops. This is standard Catholic thinking.

Christ is sending them out to teach when he says this. And their teaching authority still exists today in the bishops of the Church. And the pope is the supreme teacher of them all.

When the bishops teach, when the pope teaches, it is Christ who teaches. Don’t say you are being obedient to Christ when you reject the pope; that option is not open to you. Rejecting the pope is disobedience to Christ.

“But Alt! Cardinal Burke is a successor of the apostles too!”

Yes. He is. And his teaching is only authoritative to the extent that he teaches in union with the pope.

The infallibility promised to the Church resides also in the body of Bishops, when that body exercises the supreme magisterium with the successor of Peter.

A bishop can not stand apart from Peter and “correct” him.

“But Alt! Do we know from the Church that Luke 10:16 has this meaning you assign it?”

Yes we do. I’m glad you asked.

[T]he Sacred Council teaches that bishops by divine institution have succeeded to the place of the apostles, as shepherds of the Church, and he who hears them, hears Christ, and he who rejects them, rejects Christ and Him who sent Christ.

Let us have none of this facile nonsense from 1 Luther 5 about how allegiance to the pope is something different from allegiance to Christ. By no means. They are one and the same. When the pope teaches, it is Christ who teaches. Any other claim is not Catholic.

Nor must it be thought that what is expounded in Encyclical Letters does not of itself demand consent, since in writing such Letters the Popes do not exercise the supreme power of their Teaching Authority. For these matters are taught with the ordinary teaching authority, of which it is true to say: “He who heareth you, heareth me”; and generally what is expounded and inculcated in Encyclical Letters already for other reasons appertains to Catholic doctrine. But if the Supreme Pontiffs in their official documents purposely pass judgment on a matter up to that time under dispute, it is obvious that that matter, according to the mind and will of the Pontiffs, cannot be any longer considered a question open to discussion among theologians.

The Fourth Council of Constantinople:

We believe that the saying of the Lord that Christ addressed to his holy apostles and disciples, Whoever receives you receives me, and whoever despises you despises me, was also addressed to all who were likewise made supreme pontiffs and chief pastors in succession to them in the Catholic Church.

Who rejects the pope rejects God. Christ’s words in Luke 10:16 are duly noted. 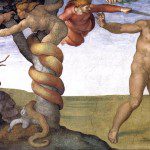 March 17, 2017
Yes, There Is Such a Thing as Social Sin in Catholic Teaching. Here's What It Means. (And What It Does Not.)
Next Post 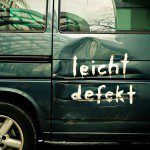 March 21, 2017 But! But! The Church Says the Ordinary Magisterium May Have Defects!
Recent Comments
0 | Leave a Comment
Browse Our Archives
Related posts from To Give a Defense