It is not marriage, what five people forced upon us all on Friday, and can not be marriage any more than a square can be round or a hexagon rectangular. What five people—a majority by one—forced upon us all on Friday was a game of make-believe, a lie. Words mean things, and marriage is not just a social arrangement entered into by any two people who may choose. Marriage is ontological, rooted in God’s design of the human person for unity and procreation. Man was not designed to fit with man, nor woman with woman.

What five people forced upon us all on Friday was not a mere rejection of the moral law of good acts and wicked acts, but a rejection of the design of the Creator. We may now design our own reality. We may now be our own God. It starts by making words mean whatever we want them to mean. If sodomy can be marriage, then anything can be marriage; and if anything can be marriage, then nothing is marriage, and there is no design and no God. Things are not what they are but what we will. A man can be a woman or a Caucasian a Negro.

The Pharisees came to Jesus, to test him. They asked, “Is it lawful for a man to divorce his wife for any reason?”

And Jesus, rooting marriage in first principles, said, “Have you not read that he who made them from the beginning made them male and female?” (Matt. 19:3-4; italics mine).

Marriage is what it is because the design of the human person is what it is. Man was not made to fit with man. In the creation, in Genesis, God made Adam, and then he made Eve—not a copy, but a complement—and said to them, “Be fruitful and multiply” (Gen. 1:28). This, Christ tells us, is the origin of marriage: in the creation of man and woman and the command to create children. Because by design a man can not make a child with another man, nor a woman with a woman, two people of the same sex can not be married.

There is a word for it, but it is not marriage. The word is “sodomy.”

The Congregation for the Doctrine of the Faith tells us that Catholics have a duty to oppose this:

In those situations where homosexual unions have been legally recognized or have been given the legal status and rights belonging to marriage, clear and emphatic opposition is a duty.” (II.5; italics mine)

Opposing this is not an option. It is what all of us must now do. None may sit apart and let others act. And for anyone who calls himself a Catholic, or a Christian of any kind, to smear his profile picture with a rainbow is to look at God and say, “I reject your design and I reject you.” We must be clear about this. We must be stark about this. We have no call to lie about this.

But as a legal arrangement now calling itself “marriage,” this kind of sodomy is destructive of more than just those who engage in it.

But it is, as Pope Francis has told us, also destructive of children because it deprives them of a mother and a father. It is destructive of the family, where children are raised and learn to be complete human beings. The reason the state has traditionally favored marriage by granting it special benefits is precisely because a family, with a mother and father, is best suited to the raising of children to be upright members of society. The health of the family is necessary to the health of the state.

Children, study after study has shown, need their own mother, and their own father, for their moral health and psychological health. To call sodomy “marriage,” to allow such couples to adopt and raise children, harms children in that it deprives them of an environment in which they can learn respect for the body God gave them, right moral and sexual conduct and differences, and healthy relations between the sexes. Without that, we harm our children and, in turn, our society in a way that is difficult if not impossible to repair.

But here is where we are; and now what? We are living in the cities of the plain. Genesis describes the evil of Sodom and Gomorrah:

But before they lay down, the men of the city, the men of Sodom, both young and old, all the people to the last man, surrounded the house. And they called to Lot, ‘Where are the men who came to you tonight? Bring them out to us, that we may know them.’ Lot went out to the men at the entrance, shut the door after him, and said, ‘I beg you, my brothers, do not act so wickedly. Behold, I have two daughters who have not known any man. Let me bring them out to you, and do to them as you please. Only do nothing to these men, for they have come under the shelter of my roof.’

But they said, ‘Stand back!’ And they said, ‘This fellow came to sojourn, and he has become the judge! Now we will deal worse with you than with them.’ Then they pressed hard against the man Lot, and drew near to break the door down. But the men reached out their hands and brought Lot into the house with them and shut the door. And they struck with blindness the men who were at the entrance of the house, both small and great, so that they wore themselves out groping for the door. (Gen. 19:4-11, ESV; italics mine)

The people of Sodom loved their sin so much, they were so mad for it, that even after God struck them blind “they wore themselves out groping for the door” so that they could get at their prey.

And that is what our own country is doing when we insist so much on our own sin, and upon our own mad desire to deny God’s design for us and create ourselves, that we demand the law of the country suit our own will and call any opposition hate and silence it.

God is striking us blind, but we are wearing ourselves out groping for the door.

That is where we are, and what do we do?

We could take the approach of Abraham and bargain with God. When God told Abraham he would destroy the cities of the plain “because their sin is very grave,” Abraham asked him: “Will you destroy the righteous with the wicked? What if you find fifty righteous people there?”

God told him: I will not destroy it for fifty.

“But what if there lack only five of the fifty?”

“I will not destroy it for forty-five.”

“What if there be forty?”

“I will not destroy it for forty.”

Through this method of bargaining, Abraham managed to get the number down to ten: God would not destroy Sodom and Gomorrah if he found ten righteous people there (Gen. 18:22-33).

There must not have been even ten.

Might God save this nation in particular, or Western Christian civilization in general, if we sought after righteousness for ourselves and reminded him of the ten most righteous people we know?

It breaks my heart to write these words, but I believe they are true, and so I write them.

Western Christian civilization is irretrievably lost. The total destruction is coming, and it is only a question of when, and how, and by whom. The only question is—to borrow the phrase from T.S. Eliot—what fragments we can shore up against the ruins. Parliamentary maneuvers like amending the Constitution are not going to work in a world that has rejected not only basic moral law but observable reality.

Cardinal Burke noted that pagan societies may have tolerated sodomy, but even they never called it marriage. That has never happened—until now. A world in which such a thing is even conceivable, let alone has happened, is not one that I think can be saved. (Individuals can be.) God has given us over to our sin (cf. Rom. 1:24-32). He has said: “If you love your sin so much, then sin yourselves to death.” It may not be he who destroys us by himself, but he who permits us to be destroyed by our own act. And so we commit suicide, and God does not lift his hand to stay us.

We are under his wrath. Wicked leaders are God’s judgment on a sinful nation.

When God led Lot and his family out of Sodom, his wife looked back at the smoldering ruin behind her, and she became a pile of salt.

I don’t think it matters.

My advice is: Do not look back. Speak the truth where we can to save souls, yes. But do not look back and long for what we used to be. It is irretrievably lost.

I think the Prophet Haggai answers the question for us: What now?

Rod Dreher has called it “the Benedict option.” In a recent article in Time he says that Christians must accept that they are exiles in their own country. The only hope for Christianity is for us to be like St. Benedict in the wake of the fall of Rome: retreat into community with each other, withstand hostility and persecution, preserve as much of Christian culture as we can against the destruction to come, and use it to rebuild later on when the Dark Ages end. Bring as many people into the ark as you can who will hear you and come.

For Rome, the Dark Ages came because their moral deterioration left them open to attack from the barbarians. For us, the barbarians are Radical Islam. I have seen no evidence that this country has the necessary will to do what has to be done to stop it.

Some might say that all this amounts to throwing in the towel. But no. It is just another strategy for victory that takes the very long historical view. Unless Christ should come again, I do not see any other option. The culture, as it is, is not going to be saved. God has given us over to our sin. It must be rebuilt.

Do not look back. Instead, go up to the mountain and bring down timber. 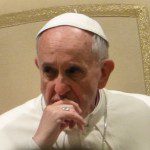 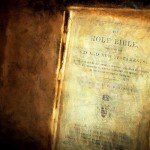 July 7, 2015 Answers for Same-Sex "Marriage" Advocate Matthew Vines.
Browse Our Archives
Related posts from To Give a Defense