Small Details and Moments of Repair

Over the past year I have become well-versed in romantic comedies. The most significant plot point in these movies is what’s called the “meet-cute,” a scene where two future love interests meet for the first time in an eccentric or comical manner. The meet-cute is vital to the plot of the movie, and not just because of the characters—the setting, backdrop, and time of day also typically impact the rest of the story. If you blink and miss some of those early details, there’s a risk that the climax at the end of the movie will leave you feeling neglected and longing for a resolution.

In this week’s Torah portion, Vayakhel-Pekudei, we come to the conclusion of the Book of Exodus, an end that demands a second look at the beginning, a search for the origin of this long, biblical thread. Vayakhel-Pekudei is a dizzying double portion which recounts, in detail, the craftsmanship and artistry that went into the construction of the mishkan, God’s earthly dwelling place. It is only in the final verses of this parasha—after the lamps have been lit, the altar prepared, and the incense burned—that Moses is able to begin worshiping through sacrifice.

At the entrance of the Tabernacle of the Tent of Meeting he placed the altar of burnt offering. On it he offered up the burnt offering and the meal offering—as the LORD had commanded Moses. —Exodus 40:29

On the one hand, this verse reads as the culmination of the second half of the Book of Exodus. Finally! The mishkan is being put to use! It works! Or perhaps, going back a bit further, the completion of the mishkan is meant be the long-awaited reward for a journey that began at the beginning of the Book of Exodus; it is the resolution of our communal narrative from slavery to freedom, from a single baby wading through the Nile to an entire people crossing the Sea of Reeds.

But let’s push back even deeper. The completion of the mishkan is also a moment that reaches all the way back to the Book of Genesis, to a time before the Israelites, before Pharaoh, and even before Abraham and Sarah.

In Genesis 4, mere moments after Adam and Eve were banished from the Garden of Eden, their children, Cain and Abel, each bring an offering to God—a grain offering from Cain and an animal offering from Abel. Abel’s animal offering is ultimately accepted, while God pays no heed to Cain’s. The pain and consequences of this primordial moment has an unprecedented reach into the Israelite future. Murder, childbirth, banishment, a scattered people—there is a brokenness that, despite the highs of our ancestors, persists through the first two books of the Torah.

It is only at this moment at the end of Exodus, when Moses presents an offering to God, that we witness a tikkun—a moment of repair that reaches all the way back to Cain and Abel. Moses’ first offering to God in the mishkan is both a grain and an animal offering, echoing the offerings of both Cain and Abel back in Genesis 4. Unlike the narrative in Genesis 4, however, both of these offerings are accepted by God. It is truly a moment of divine compassion; we as a people have finally overcome the baselessness of Cain, and God, too, moves toward grace.

The power of this tikkun lies not only in the act, but also the place. Remember how important those small details are? Cain’s act of vengeance occurred on the outskirts of Eden, textually close, yet miles away, from paradise. The offerings of these two fated siblings were ultimately an act of distancing. Moses’s offering, on the other hand, takes place in the center of God’s dwelling; it is an act of drawing near through the act of sacrifice, but also through the setting of the sacrificial moment.

While the “meet-cute” might not always be love at first sight, it is the starting point, the tender and sometimes-painful place where relationships bud. The relationship between God and Israel certainly sees its fair share of peaks and valleys through Genesis and Exodus and will again throughout the continuation of the Torah, but for a moment, Israel can rest. Intimacy with God has been achieved once again, this time within the mishkan.

As we prepare to mark a year of this pandemic, may we be empowered to reach for those moments of tikkun, the moments of repair that come through perspective, preparedness, and hope for a renewed sense of God’s dwelling amongst us.

Max Edwards is a Shanah Hey student in the Rabbinical School at Hebrew College, with an expected ordination date on June 6, 2021. He is also the Rabbinic Assistant at Temple B’nai Abraham in Livingston, N.J.

March 7, 2021
The Coronavirus Yahrtzeit; Turning Around the Evil Decree
Next Post 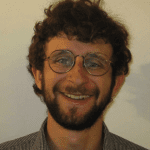 March 17, 2021 The Book of Calling In
Recent Comments
0 | Leave a Comment
Browse Our Archives
get the latest updates from
Seventy Faces of Torah
and the Patheos
Best of Patheos
Channel
POPULAR AT PATHEOS Jewish
1

Lighting the Plague of Darkness
Seventy Faces of Torah

Jewish
Close But Not Quite, Near Yet Still Far
Seventy Faces of Torah

Jewish
Far and Near Embrace
Seventy Faces of Torah