Confessions of an Advent Extremist: A Q&A with Sybil MacBeth

Confessions of an Advent Extremist: A Q&A with Sybil MacBeth November 3, 2014 Deborah Arca 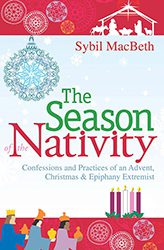 Even as we throw out the empty candy wrappers and put away the costumes from Halloween, the season of Advent looms just around the corner. Starting the last Sunday of November, Advent announces the beginning of the Christmas season in the Christian liturgical calendar. In our hyper-consumer culture however, the season of Advent often gets overlooked –trampled, rather, by the mad dash of Santa Claus and his marketing reindeer.

MacBeth describes herself as a dancer and a doodler, and is a former community college mathematics professor. Her previous book, Praying in Color: Drawing a New Path to God was a groundbreaking success. I spoke with MacBeth via Skype from her home in Nashville, TN.

Tell us why you describe yourself as an Advent, Christmas and Epiphany “extremist.”

I think I started off as just an Advent extremist, partly because I’m a completely inadequate Christmas gift-giver and shopper. And I would find that when Christmas would come I would be so miserable. One year somebody gave me an Advent calendar, where you colored in pictures of the Saints, and I colored it in and it was like this revelation that I could do something on a daily basis during Advent that wasn’t focused on Christmas, or buying gifts or decorating.

I’m also an Advent extremist because I almost never put up a Christmas tree before the 20th of December, and most of my neighbors have had theirs up since Thanksgiving

Which is liturgically correct, right?

Right, but not common anymore.

Which brings us to the way our culture celebrates Advent and Christmas.  Actually, the culture doesn’t celebrate Advent at all! We skip straight to Christmas and often miss this beautiful season leading up to the birth of Jesus. Tell us about what Advent is really supposed to be like.

I always knew Advent was preparation for the coming of Jesus. But it’s also about the Second Coming of Christ. So on the one hand we’re celebrating this wonderful birth, and it’s really playful, and then there’s this Second Coming which is about death and the end of time and it’s really serious. So I like the paradox of playfulness and seriousness. When I do my Praying in Color events, I also realize there’s a connection between prayer and play … and they have some common things about them. When you pray and when you play, you’re letting down your guard; you’re becoming childlike; you surrender to the moment. We often think of prayer as being very serious and very reverent, but I have this sense that God likes a playfulness about our prayers as well.

I like that Advent mixture of prayer and play, and the serious and the joyful, and the hopeful and the despair, and all of those things that go along with Advent.

And that’s all in this book. There’s serious, but there’s also lots of play in this book. I think we need more books like this.  In my experience, people want to do stuff. They want to engage their faith in concrete ways. And this book is full of creative practices to do every day during Advent (and Christmas and Epiphany).

Typically what adults have done for Advent is sit down with a daily meditation book and read the meditation. And what children would do is open the doors of an Advent calendar (which have gotten more like Christmas presents). And then families would sometimes have advent wreaths at the dinner table. But to some extent, the advent wreath at the dinner table isn’t so realistic anymore – how many times a week does a family actually sit down and have dinner together? So often I’ll say, why don’t you put the advent calendar outside the bathroom, and every night light an advent candle together  before you go to bed! It’s more realistic about our lifestyle.

Also, I’m very left-brain, I’m a math person. I don’t always learn by reading. If you’re telling me to sit down and be quiet and get still, I’ve discovered I don’t necessarily get still by sitting still. I often get still on the inside by engaging my body, by being playful, by doodling. And I also think if kids do advent calendars and parents do reading there’s this separation about what’s acceptable. I like the whole family to do advent calendars together, where everybody writes words and draws pictures everyday. So it’s more of a collective kind of thing.

I like to say the book engages the whole body and different learning styles.

So you could do this book alone, or with your family or a small group at church …

Or an online social community! You could share: What did you do last night?

Another thing I want to say, is that to some extent Christians have made Easter the Christian holiday. But I feel radical about this: I don’t think Christianity is just about Jesus’ death and resurrection. In my church we say that the mystery of faith is Christ has died, Christ has risen, Christ will come again. And and I’m thinking, that’s half the mystery … the other half is the Incarnation. It was so magical and mysterious and wonderful that God comes to be present. So I’ve been trying to come up with my own new proclamation of the faith, like Christ was imagined, Christ is born, Christ will spread like wildfire. Death and resurrection are important, but so is Incarnation, the embodiment of God in the world, the body of Christ, all of us.

You’re a big fan of the season after Christmas called Epiphany.

That’s when Christ spreads like wildfire! That’s where we discover, this is not going to stay in this little teeny country. It’s really going to go viral. And it does go viral! Epiphany is the season of going viral.

We talk about Epiphany being one day, but I kind of eke it out to almost Lent. We used to have an Epiphany party and we’d have a cake and put three coins or three babies in there, and the people who got those had to go upstairs and dress up like Kings, with lampshades and blankets, and while they were dressing up, the others had to plan entertainment for them.

My favorite practice for Epiphany is to take the Christmas ornaments and lights off of the tree and cover it with white lights and a bunch of stars I’ve collected over the years. And I leave those lights and stars up with the idea that this is going to spread … this is not staying here … this is going to shine all over the world. And sometimes I leave them up until Ash Wednesday!

Beyond buying your book, how can people find you and your Advent blog?

The best way to find me is on my website:  prayingincolor.com.

Read an excerpt from The Season of the Nativity at the Patheos Book Club here!

November 3, 2014
Freedom and Resolve: A Q&A with Spiritual Teacher Gangaji
Next Post

November 4, 2014 Worried to Death: Amy Simpson’s "Anxious" and the Sin of Worry
Browse Our Archives
get the latest from
Take and Read
Sign up for our newsletter
POPULAR AT PATHEOS Entertainment
1

Take Time for Time: The Doc is Worth...
Time, a powerful new documentary directed by Garrett Bradley and available now...
view all Entertainment blogs
Copyright 2008-2020, Patheos. All rights reserved.