Artwork And Literature Helps Spread the Message Of Christ

Before my entrance into the Catholic Church very little thought was given to how the faith was transmitted.  The Bible was basically all we needed and other things, like statues, were idolatrous and took our minds off Christ.  At least that is what was taught, but that is not the case.  There are many means that have developed over the centuries that has helped spread the Gospel.

Most churches, whether Protestant (the older buildings anyway) or Catholic, have stained glass windows.  Our Protestant friends most likely only have colored glass while our Catholic churches are adorned with figures of biblical heroes and the cross.

Some are more elaborate and others more simple, but they tell a common story.  In their own way they are spreading the Gospel message.  Nichols states “The continuing history of Christian art as an attempt to re-express revelation in aesthetic terms is, therefore, one of the ways in which Tradition operates (Nichols, page 189).”

From the above quotation we see that the artwork of the church is a way to continue the spread of the message that the Church has had from the beginning.  I will continue with a personal example of church artwork.  My home parish has a beautiful set of stained glass windows depicting scenes from the Old and New Testament.

The Eyes Of A Child

So I will  be up front and admit that I had never seen these before as they are positioned above where we sit.  One day my son was looking up at the glass and he asked me what it was.  We proceeded to go through each scene and described what was going on.  He then exclaimed “Jesus did all that for me!”

Our priest just happened to be close by, and he overheard part of our conversation and He told my son “He sure did.”  The effect this had on my boy is profound.  When he hears the word church he thinks of those windows and proceeds to tell everyone what is on it. 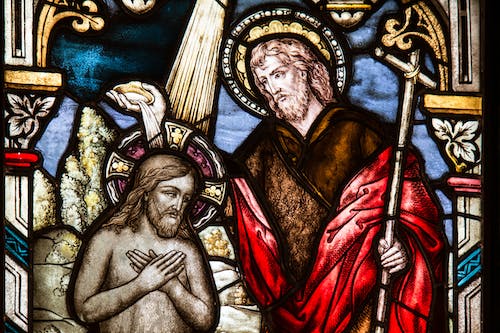 The Church Taught The Illiterate

The church has been accused, at least in medieval periods, of keeping the scriptures away from the people.  That is a whole other topic on its own, but the simple fact of the matter is that there was a very low literacy rate.  Church artwork has been described as the Gospel for the poor and for good reason.

Music is another foundation that can help us memorize a message that the church wants us to have.  For most people it is easier to memorize something when it has some sort of a tune to it.  Music is fun, it makes us alert, and it stimulates the senses.  It is only natural that the Gospel message be included in it in some way.

John Foley wrote this hymn for the Catholic Church, and it appears in the music issue of our Missal. [It does in ours, also. We probably use the same edition.]  In the Eucharist we are partaking of one bread because we have a common heritage.  We are family that is gathering at the table of our Lord.

The Douay-Rheims translation of 1 Corinthians 10:17 states “For we, being many, are one bread, one body, all which partake of one bread.”  When we sting this song at Mass we are remembering the words of Saint Paul himself.  Though we come from different walks of life we are one.  We are adopted sons [and daughters] of God through our Lord.

As a result we are to put our differences aside and try to take care of one another.  Many have sung these words without realizing the basis for it that is found in sacred scripture.  One would have to assume that parish members know a lot more scripture than they think.

As a protestant there was no shortage of literature, but it may not have been in agreement and may have been five hundred years old if we were lucky.  In the Catholic Church there is a treasure that should be utilized.

That treasure is the writings of the early church fathers.  On a personal note it is the writings of these fathers that convinced me to pursue Catholicism.  As the works of men such as Saint Augustine, Saint Ignatius of Antioch, and Justin Martyr were studied one thing became painfully obvious.

There were no Protestants back then, and the church taught the same things then as it does now.  Some of these men were personally trained by the Apostles.  Others were trained via Apostolic Succession, and the lineage can be traced back to the Apostles.

Some like, Justin Martyr, did his own investigation and discovered the claims of the church to be true.  We should be willing to learn from our ancestors in the faith.  Some of them may have had similar stories to ours and their conclusions can help draw us closer.

In conclusion there are many ways in which the faith is transmitted, but they all work together.  The Church is smarter than many realize and know that music, art, and books other than the Bible can be conduits to helps people live a holy life.  Each area speaks to different people and that is the genius in all of it.  It gives us different avenues to preach about what Christ did.  We should be willing to embrace all of these areas as we answer the call of the great commission.

Nichols, Aiden. The Shape of Catholic Theology: An Introduction to Its Sources, Principles, and History. Collegeville, MN: Liturgical Press.

February 23, 2020
Human Freedom And The Salvific Work Of Christ
Next Post

February 26, 2020 3 Practical Steps You Can Take to Grow Closer to The Lord This Lent
Recent Comments
1 Comment | Leave a Comment
"Excellent presentation. I have found that what matters most is the "posture" of the heart ..."
John A Matter Of The Heart
"I agree with you 100%. The bishops have instructed everyone to receive on the hand ..."
aggiegirl2000 A Matter Of The Heart
"After seeing exactly how screwed up Christian Conservatives are, worshipping a man that is immorral. ..."
Prax You Are With Jesus Or With ..."
"Jesus or Beelzebul? I'll take curtain three, thank you. I don't DO Fear religions."
Kyllein MacKellerann You Are With Jesus Or With ..."
Browse Our Archives
Related posts from The Pursuit of Holiness