St. Irenaeus, Gnosticism, And The Rule Of Faith

In the second century Gnosticism threatened to tear the young Christian Church apart.  It was a heresy that taught that all matter was evil, Jesus was spirit, and that true salvific doctrine was passed down through a secret oral tradition.  To combat this growing problem the early Church father St. Irenaeus wrote a lengthy treatise titled Against Heresies.

Foundations Of The Creed

One of the methods used by the great Church Father was the rule of faith.  In describing the rule of faith Irenaeus writes, “The Church, though dispersed through our the whole world, even to the ends of the earth, has received from the apostles and their disciples this faith: [She believes] in one God, the Father Almighty, Maker of heaven, and earth, and the sea, and all things that are in them; and in one Christ Jesus, the Son of God, who became incarnate for our salvation.”

This rule of faith would lay the groundwork for what would become the Apostles’ Creed.  St. Irenaeus argues that the faith was given by Christ to the Apostles, and then to the bishops to whom the disciples appointed.  Which is exactly what the Catholic church teaches today.

The rule of faith also shows that Christ was truly incarnate, and that matter was created by an eternal God and not evil.  The rule of faith was a vital part in combating gnostic teaching because it showed that they had no historical, scriptural, or apostolic support for the claims that they were making.

It helped expose their schismatic and anti-scriptural view of Christianity.  Irenaeus also appealed to Ephesians 1:9-10 in his refutation of Gnosticism.  That passage of scripture states, “he has made known to us the mystery of his will, according to his good pleasure that he set forth in Christ, as a plan for the fullness of time, to gather up all things in him, things in heaven and things on earth (NRSV).”  The great saint used this to show that, contrary to the gnostic view, not all matter is bad. 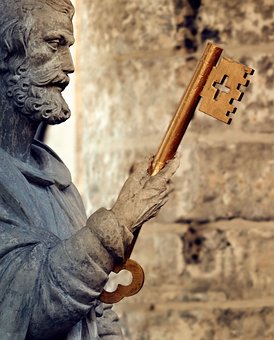 One Faith Given By Christ

The Church was to be a unified body of believers with Jesus Christ as its head.  However the gnostic heresy was causing division.  It is linked with the rule of faith in that there was only one faith handed down from Christ.  There was not one faith for one group, and a special secret faith for a select few.  The faith in Christ is available to all people and in that we should be unified.

The rule of faith previously cited is a great tool in confronting false doctrines in our own times  There is no shortage of false doctrine and some of these groups out there are great at evangelization.  This is impressive given how low their numbers are compared to Catholics.  The rule of faith is a great tool because it shows that the faith is not a new invention, but was passed down by Christ himself.

It shows that Christ is God incarnate, and firmly teaching that the Trinity is one being with three distinct persons.  Many of these groups deny the Trinity and claim scriptural support.  Many of these passages were used in the days of Irenaeus and he corrected false usage.

Whether it be in person, phone, or email.  A dialogue about the truth can mean a lot to someone caught in false doctrine.  It gives them someone to ask questions to and the Holy Spirit can plant a seed.  Many great saints came to faith in just that way.

February 26, 2020
3 Practical Steps You Can Take to Grow Closer to The Lord This Lent
Next Post

March 1, 2020 Sin and the Gift of Grace: A Reflection on Psalm 51
Recent Comments
1 Comment | Leave a Comment
"Excellent presentation. I have found that what matters most is the "posture" of the heart ..."
John A Matter Of The Heart
"I agree with you 100%. The bishops have instructed everyone to receive on the hand ..."
aggiegirl2000 A Matter Of The Heart
"After seeing exactly how screwed up Christian Conservatives are, worshipping a man that is immorral. ..."
Prax You Are With Jesus Or With ..."
"Jesus or Beelzebul? I'll take curtain three, thank you. I don't DO Fear religions."
Kyllein MacKellerann You Are With Jesus Or With ..."
Browse Our Archives
Related posts from The Pursuit of Holiness