The Purpose of Vox Nova

Christians must be conscious of their specific and proper role in the political community: they should be a shining example by their sense of responsibility and their dedication to the common good; they should show in practice how authority can be reconciled with freedom, personal initiative and with the solidarity and the needs of the whole social framework, and the advantages of unity with profitable diversity.

On the national and international planes the field of the apostolate is vast; and it is there that the laity more than others are the channels of Christian wisdom. In their patriotism and in their fidelity to their civic duties Catholics will feel themselves bound to promote the true common good; they will make the weight of their convictions so influential that as a result civil authority will be justly exercised and laws will accord with the moral precepts and the common good.

The Church cannot and must not take upon herself the political battle to bring about the most just society possible. She cannot and must not replace the State. Yet at the same time she cannot and must not remain on the sidelines in the fight for justice. She has to play her part through rational argument, and she has to reawaken the spiritual energy without which justice, which always demands sacrifice, cannot prevail and prosper…[t]he direct duty to work for a just ordering of society, on the other hand, is proper to lay faithful. As citizens of the State, they are called to take part in public life in a personal capacity. So they cannot relinquish their participation ‘in the many different economic, social, legislative, administrative and cultural areas, which are intended to promote organically and institutionally the common good’ (John Paul II, Christifideles Laici, 42).

Do away with the obstacles to the Christian spirit; revive and make it strong in the State, and the State will be healed. The strife between the classes and the masses will die away; mutual rights will be respected. If Christ be listened to, both rich and poor will do their duty. The former will realise that they must observe justice and charity, the latter self restraint and moderation, if both are to be saved. Domestic society will have ben solidly established under a salutary fear of the divine commands and prohibitions; and so likewise in society at large, the precepts of the natrual law will prevail, which tells us that it is right to respect lawful authority, and to obey the laws, to do no seditious act, nor contrive anything by unlawful association. Wherever Christianity rules over all without let or hindrance, there the order established by Divine Providence is preserved, and both security and prosperity are the happy result. The common welfare, then, urgently demands a return to Him from whom we should never have gone astray; to Him who is the Way, the Truth, and the Life, and this on the part not only of individuals but of society as a whole. Christ our Lord must be reinstated as the Ruler of human society. It belongs to Him, as do all its members. All the elements of the commonwealth; legal commands and prohibitions, popular institutions, schools, marriage, home-life, the workshop, and the palace, all must be made to come to that fountain and imbibe the life that comes from Him.

Vox Nova is a response to the ecclesial mandate to promote the common good in every sphere of human existence. We come from varying backgrounds and carry diverse social outlooks, traversing a wide range of demographics and political sympathies. Vox Nova is free, to the furthest extent possible, from partisanship, nationalism and demagoguery, all of which banish intellectual honesty from rational discourse.

United in our Catholic, pro-person worldview, yet diverging in our socio-political opinions, we seek to provide informed commentary and rigorous debate on culture, society, politics and law, all while unwaveringly adhering to, and aptly applying the principles of Catholic doctrine. We are not intellectually wedded to any single political ideology. Following the example of the rich tradition of Catholic social doctrine from Pope Leo XIII to Pope Benedict XVI, we do not forge artificial blockades between “faith and morals” and “social judgments.” We do not and will not filter Catholic doctrine and morality through contrived categories in order to morph our Catholic faith and practice into some ideologically acceptable form.

We understand that the grace of Jesus Christ, the Redeemer of humanity, extends to and permeates every human act, however private or public, and that the only viable path to peace, prosperity and justice in the world is to recognize that grace saturates, sanctifies and perfects every aspect of nature. Thus, faith informs and grace affects the full scope of human effort, from the deepest devotion of spirituality to the most mundane activity in the social sphere. Vox Nova seeks to be a herald of this glorious truth and its manifold implications for culture, society and politics.

Let us close by considering the words of Karol Wojtyla on the social implications of Jesus Christ, delivered in the presence of Pope Paul VI. Without ever reducing Christ to a mere social liberator, the soon-to-be Pope John Paul II nevertheless speaks powerfully of the social impact of the Gospel:

“Who is Jesus Christ for all the different continents of the world, for all the different societies, traditions, cultures, political structures? Jesus is the symbol of liberation from unjust structures both social and economic, but he is also the sign of liberation for people who are denied freedom of conscience and religious freedom, or who have those freedoms drastically curtailed at crucial points. He is in every way a reproach to affluent, acquisitive consumer societies. But he is the touchstone of identity for the African nations which are moving towards independence. He is a Word of divine wisdom for the ancient spiritual traditions and cultures of the East. Here in the Vatican, we are at the very centre of the Church, at the point where Peter’s reply to the question: “Who is Jesus Christ?” is formulated. Let us first listen to what is said by individual men and women and by whole peoples. They all testify to the fact that in Jesus ‘the way, the truth and the life’ are wide open, that great highway ‘along which–as the Council asserts–life and death are sanctified and take on fresh meaning’ (Gaudium et spes, 22).” -Karol Wojtyla, Sign of Contradiction, 109

Catholic
Thank You For Your Support
Vox Nova

Catholic
Merry Christmas and Thank You for your Support
Vox Nova 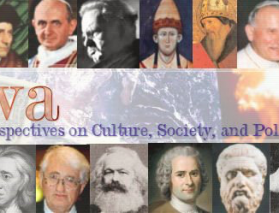