Raising the specter of liberation theology 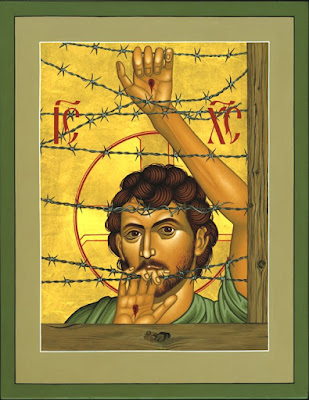 Chris Blosser responded to Vox Nova’s Henry Karlson’s series which gives a positive spin on “immanentizing the eschaton” (see part one here) with a post that issues a warning against too quickly embracing such ideas. Blosser riffs off of countless passages from Ratzinger’s personal theology as well as his writings in his official ecclesial roles as head of the CDF and as Bishop of Rome to critique Henry’s post, as well as my own claims about the ways in which the Church is called to “prefigure the Kingdom in history.”

As I read him, sifting through the endless Ratzinger references, this is the main concern he has with Henry’s (and my) position(s):

At the same time, our work on this earth is provisional — we should enter into the social, political and economic realms, cognisant of the necessary imperfections of human affairs, accomodating the demands and reality of human freedom, and particularly vigilant concerning pseudo-messianic attempts to realize “the absolute in history.”

Aside from quibbling with his choice of words about Christians “entering” the “social, political and economic realms,” as if Christians are anywhere else BUT in these “realms,” I have no argument with Blosser’s concerns and his warning that we should never think that we will realize “the absolute in history.”

My own thinking on this has been influenced by the political theology of Fr. Johann Baptist Metz who popularized in Catholic theology the idea of the “dangerous memory” of Jesus (memoria passionis, mortis, et resurrectionis Jesu Christi) which, when remembered by the Church, is a memory of

the testament of his love, in which God’s dominion among men and women appeared precisely in the fact that the dominion that human beings exercise over one another began to be pulled down, that Jesus declared hiself to be on the side of the invisible ones, those who are rejected and oppressed, and in so doing announced to them God’s coming dominion as the liberating power of an unconditional love. (All Metz quotes in this post are from chapter 5 of his Faith in History and Society: Toward a Practical Fundamental Theology, a New Translation, edited by Matthew Ashley (New York: Herder & Herder, 2007.)

This “dangerous memory” of Jesus — as a memory of both the past as well as the future coming of God’s Reign — “badgers the present and calls it into question” by subversively anticipating the future. Metz calls this radical questioning of the present in light of the future the “eschatological proviso,” and this proviso relativizes the claims of any political system to realize the Reign of God:

[I]t is an anticipatory remembering that liberates us from any divinization or absolutization of cosmic and political powers. […] The church can and must draw its critical strength from remembering this ‘eschatological proviso’ when faced with every totalitarian system of control and with every ideology of a linear, one-dimensional emancipation. To be specific,… wherever the history of freedom is carried out without remembering this eschatological proviso it always falls victim to the compulsion to set up a this-worldly subject of the entire history of freedom, which has the potential to lead to a totalitarian rule of human beings over other human beings.

Metz writes explicitly with the German experience of the Holocaust in mind, insisting that any theology that is done with its back toward Auschwitz can only serve ideological purposes. For Metz, though, radical attention to the eschatological proviso does not lead to the sharp separation of “eschatology” and “politics” that we see in the work of Ratzinger. This is because Metz’s sense of eschatology is apocalyptic: the memory of God’s future Reign breaks into the present and judges it. For Metz, the proviso is precisely the radical source of the Church’s political critique of society, and the dangerous memory of Jesus and of God’s future Reign is what should indeed lead the Church to a greater sensitivity to the victims of history and to a commitment to personal, ecclesial, and societal conversion toward deeper solidarity with them as well as political structures and cultural attitudes that follow from that solidarity. In other words, the eschatological proviso — which is Blosser’s precise concern it seems — is present in Metz and in other political and liberationist theologies (I could cite similar passages from Gustavo Gutierrez, for example) but it does not prevent them, nor should it, from constructing radical political theologies that do not separate eschatology from politics.

Aside from these nuances, however, I agree with Blosser on his main point: no political system can fully realize the Reign of God. In fact, this is precisely why I am attracted to anarchism as a radical critique of all political arrangements.

Nor does Blosser (or Ratzinger) ever demonstrate that even the few liberationists who participated directly in revolutionary movements (e.g. Ernesto Cardenal) have identified such activities and projects with the building Kingdom in its fullness. He merely claims that they do so or are in danger of doing so. I’m presently engaged in doctoral work on political and liberation theologies and ecclesiology — precisely the questions that concern Blosser — and I know of no liberation theologian who ever identifies a particular political movement or program with the “fullness” of the Kingdom. On the other hand, in nearly every text that I encounter is included an acknowledgement that the Kindgom only comes in its fullness at the end of time.

When Latin American liberationists, for example, participate/d in concrete political activities (or even simply held views that were generally in favor of a change of regime), they no more thought that they were bringing the Kingdom of God, in its fullness, to earth than Blosser does when he advocates particular political programs such as the overturning of Roe v. Wade. To become passionately involved in a concrete political project which seeks to make a social situation more in keeping with the Kingdom is not the same thing as believing one is helping to bring the Kingdom, in its fullness, to earth. Neither Blosser nor Ratzinger has demonstrated that liberation theologians or the various European “political theologies” (Metz, Solle, et al.) ever made such claims. In fact, what you find over and over again in the writings of liberation theologians is their repeated insistance that the Church be “cognisant of the necessary imperfections of human affairs,” in Blosser’s words.

But perhaps this is the point of parroting cartoonish versions of liberation theology. The perpetuation of the myth of “violent” liberation theology allows Blosser and those who think like him to distract attention from the violence involved in their own political views as well as the utopian-theological fantasies embedded in their grand vision of global capitalism. “Liberation theology” has been and continues to be one of the theological-ecclesial scapegoats that the right points to in an attempt to hide the systematized violence of the policies they advocate as well as the outright violence and warmaking that they continually claim “has to happen” if such an order — the immanentized Kingdom of Wealth — is to be preserved.

August 31, 2009 Moyers on the Failing Democrats, Corporate Money & Health Care Reform
Recent Comments
13 Comments | Leave a Comment
"Thank you for this honest and reflective article. You gave me lots to think about. ..."
mariangreen If Christ is our only King
"Great Post, Jeannine. I, too, felt a lot of resonance."
Matt Talbot If Christ is our only King
"I'm late seeing this, and I'm sorry for my prolonged absence here. But I want ..."
RoamingCatholic If Christ is our only King
"All the public information about Trump's plan indicates it would have been better. One reason ..."
Theodore Seeber A Lament for Afghanistan
Browse Our Archives
Related posts from Vox Nova