On Being Mistaken for a Muslim

Twice, that I can remember, I have been mistaken for a Muslim.  It may have happened more often than that, but only twice did the person making the mistake call themselves to my attention.   The reason for this mistake is really quite simple:  in colder weather I wear a keffiyeh as a scarf.  I started doing this about thirty years ago on my honeymoon.  Keffiyehs were popular with German university students as scarves, and I bought a cheap one since the weather that trip was unusually cold.  Since them I have bought them at the Rastro, the big flea market in Madrid.  My most recent one, however, was a gift from my son Francisco, who bought it for me in the old city in Akko, Israel.   On occasion I add a beaded skull cap.  Mine is originally from Morocco (I think—I bought it in Granada, Spain as a souvenir) but I have seem similar ones from countries ranging from North Africa to Afghanistan.  It is warm and also serves quite well as a kippah when I am invited to a synagogue:  I do not need bobby pins to keep it on! 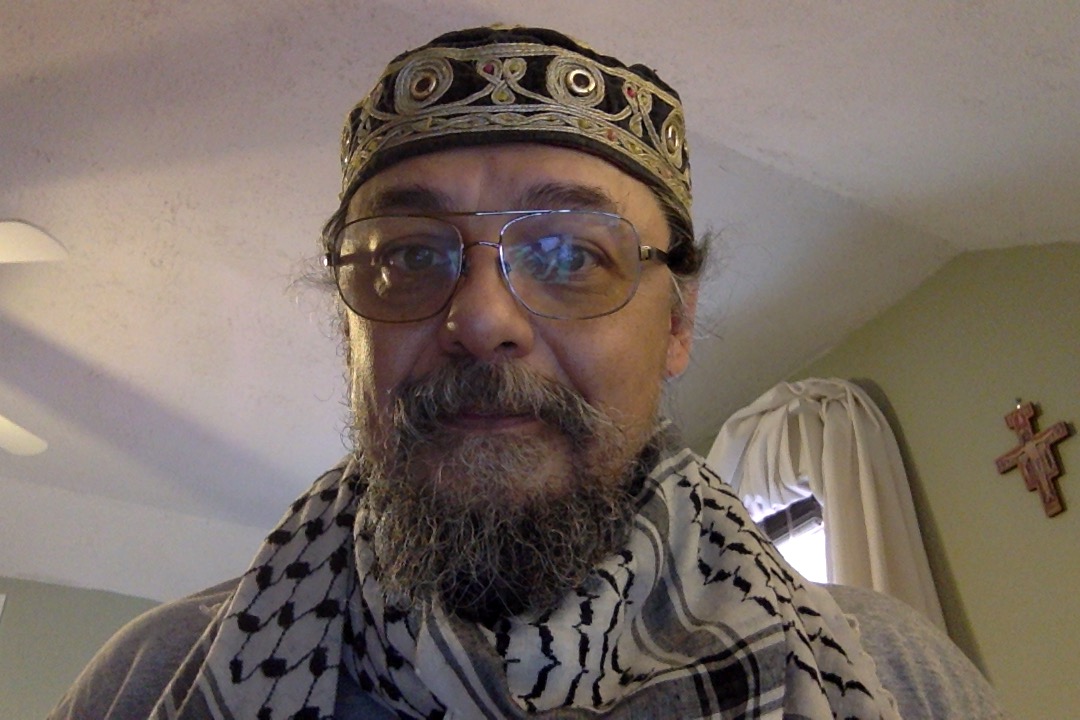 It seems reasonable, given my beard and olive complexion, that I would be mistaken for someone from the Middle East.  Indeed, a Palestinian graduate student once told me that if he saw me on the streets of Cairo (even without the Keffiyeh), he would immediately speak to me in Arabic.

But as to being actually mistaken for a Muslim:  the first time was in Hartford, CT, about 10 years ago.  I was walking to work wearing my keffiyeh and skull cap.  A car going down the street actually stopped,  and the driver leaned out and called to me, “Are you a Muslim?”  Given that he was olive-skinned, bearded and was wearing a white skull cap, I think that he himself was Muslim.  I demurred and told him I was Christian, and he drove off.  I have always wondered if there was some specific reason he had for asking.

The second time, and the reason for this post, occurred a few days ago.  I was walking home from the office at twilight.  The weather had been cold that morning, so I had worn a sweater and my keffiyeh.  It had warmed up, so the sweater was in my bag, but I kept the keffiyeh around my neck.   At a busy intersection I was waiting for the light when a pick up truck going by slowed down and honked its horn.  I looked up in time to see the driver glaring at me and giving me the finger before he sped off.  I found this discomfiting:  so much so that I took the precaution of turning on my cellphone for the remainder of my walk.

I have been thinking about this incident a lot since it happened.  Admittedly, I have no direct evidence that the driver gave me  the finger because he thought I was a Muslim.  But I would be willing to bet on it:  there is simply no other likely explanation:  I didn’t know him, I have not yet pissed off any students, and I was not wearing the colors of Auburn or LSU (the arch-rivals of Alabama in football).   He saw the keffiyeh and assumed that I was a Muslim and/or Arab and thus a target for his bigotry.

The first instance remains sui generis.  But the second is somewhat striking:  why did this happen to me now, and never before?  One possibility is that I am now living in the deep South.   The South, as I am discovering, is not more racist than the rest of the country—as an old saying goes, “a Black man in America has two choices:  he can live down South or up South.”  (I heard this attributed to Dick Gregory, but a Google search did not turn up a definite source.)   But here in Alabama I have found that racism is expressed in ways that are different from what I have experienced elsewhere, simultaneously more subtle and more blatant.    So this incident could have been an ugly manifestation of a racialized social matrix I am still learning to navigate.

But I do not think that is the whole story.   Since 9/11 there has been a simmering undercurrent of anti-Muslim bigotry in America, one that bubbles to the surface periodically.   Republican anti-immigration rhetoric has always been accompanied by nativist xenophobia:  most Republicans were not guilty of this, but it has been a constant theme of the far right, and the efforts by mainstream Republicans to separate themselves and their party from it have often seemed half-hearted at best.   In the 90’s the targets were immigrants from Mexico and Central America.  The 9/11 attack and then the interminable wars in Afghanistan and Iraq added Muslims to the mix.    One notable exception was George W. Bush, who made a point of speaking out on this subject in the years after 9/11.  I will fault him for many things, but he is to be praised for speaking out forcefully against anti-Muslim bigotry.

During the current Republican presidential campaign anti-immigrant bigotry in general and anti-Muslim attacks in particular have become more vitriolic and much more part of the mainstream.   This has been stoked in particular by Donald Trump, whose reckless rhetoric dominates campaign coverage, but it has been copied by a number of his rivals and picked up by others in and out of government.  The terrorist attack in Paris made things much worse.    Thirty one state governors (all but one a Republican) tried to ban Syrian refugees from being resettled in their states.  The Republican controlled House passed a bill to suspend resettlement until “security issues” were resolved—ignoring the already strict scrutiny Syrian refugees face before being allowed into America (or the fact that the Paris attacks were carried out by French and Belgian citizens and not by refugees).  In Tennessee, a Republican leader called for the National Guard to be dispatched to round up the handful of Syrian refugees already resettled in the state.

Given this febrile atmosphere, it is really no surprise that some random individual decided I deserved to be flipped off for wearing a keffiyeh.  Or that protesters, most of them armed and many wearing masks, should demonstrate outside a Texas mosque.  Or that the leader of the group would publish a list of local Muslims and “Muslim sympathizers”.

In fairness, the blog posts from the Dallas Morning News also record an outpouring of support for the mosque from the local community.  And nationally, there has been other signs of support for Muslims:  not least of which has been the clear statements from the USCCB and many individual bishops in support of Syrian refugees and condemning anti-Muslim bigotry.

But the fact remains that such bigotry has been increasing, and now seems more mainstream and acceptable than before.  Polling data strongly suggests that negative opinions about Muslims (and Arabs in particular, though these are often interchangeable in the popular imagination) are increasing.   This hate filled response to my keffiyeh was minor and I could just shrug it off.  But it does make me wonder:  is this just another moment in which a nastier side of American culture have surfaced but will again sink back into the Stygian depths?  Or, given the prominent role that bigotry and hate are playing in our political debate, and the continued strong support being shown for Trump and his vile opinions, does this moment represent the beginning of something worrisome?  And if the latter, how to fight against it?

Please join me in praying for peace and offering such support as you can for material and spiritual needs of all refugees and Muslims in our midst:  “Do not oppress the alien among you, for you yourselves were once aliens in the land of Egypt” (cf. Ex 22:21).

November 24, 2015
Quote of the Day: Pope Francis on Human Evil
Next Post

November 29, 2015 The First Sunday of Advent: Strength for the Journey
Recent Comments
16 Comments | Leave a Comment
"A day after submitting this piece to Vox Nova, I learned that the Vatican published ..."
JoeGeorges Maintaining Christian Community and Practice in ..."
"I agree with JoeGeorges that it depends, but here I think the traditional three-fold distinctions ..."
David Cruz-Uribe Hoarding
"Isn’t the best answer, “It depends”? If we’re speaking about hoarding the necessities of life ..."
JoeGeorges Hoarding
"I don't think anyone would ever claim that we mainly or completely understand God. But ..."
JoeGeorges Spontaneous Abortions and Moral Theology
Browse Our Archives
Follow Us!

Catholic
Holding Hands During the Our Father: A Bad...
Vox Nova

Catholic
On striving to be guestly
Vox Nova

Catholic
The Church is not an Army, and We...
Vox Nova
TRENDING AT PATHEOS Catholic