The Future is in Our Hands (Or…If Not Us, Then Who?)

In just eight days, the good citizens of my new home state will gather to participate in a hugely significant political event: the Iowa Caucuses. Regardless of what you may think of the deeply flawed US electoral system or the motley crop of presidential candidates we will be choosing from, you surely can imagine my excitement as I look forward to this event. After participating in three presidential elections where my vote basically counted for naught (I was officially a New York State resident), I am thrilled to be part of history in the making.

As a fledgling college professor, I have naturally hoped to share my excitement and sense of civic responsibility with my students, most of whom are being offered the opportunity to vote in their very first national election. However, conversations on this topic have made it apparent that the vast majority of them will not be attending the caucus. “Will you give us extra credit if we vote?” one of them asked wryly.

Let me assure you that the purpose of this post is not to indulge in a rant against the apathetic young. Indeed, I saw many under-25’s at all of the political rallies I attended over the past six months, and I knocked on doors with some of my own students while canvassing for my preferred candidate. Idealism, commitment, and hope are still ubiquitous. But unfortunately, apathy is very adept at taking hold of people of all ages – not only in matters of politics, but also religion, cultural preservation, community-building, and perhaps every area of life where meaningful action is most relevant.

Imagine a beautiful nineteenth church filled with glorious murals, marble angels, and a full-sized, recently refurbished organ. A church built by all the spare-income of tough-minded, hardworking Polish immigrants who came to the US in search of a better life. A church situated in a neighbourhood that has become one of your city’s poorest and most stigmatized. “You’d have to be a fool to go there,” you often hear people say. “Do you want to get your head blown off?” A church that, at any Sunday Mass, can expect to see between 25-50 attendees – most of them over sixty. A church that has so much potential to contribute to the much-needed revitalization of a struggling community but until now has been unable to fulfill that potential. A church that people from the entire city flock to visit during Holy Week but ignore the rest of the year, generally assuming that it will always be there for them when they want it. A church that, without some sort of radical intervention on the part of the community, will probably be closed in ten years. 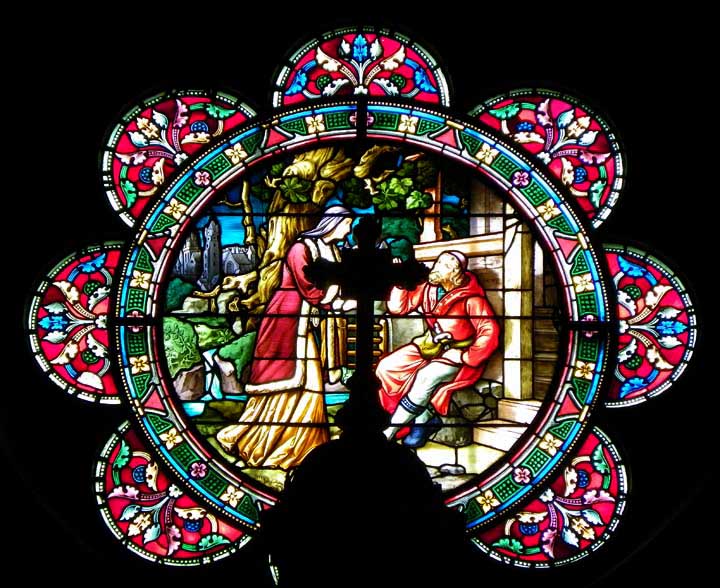 This is the plight of many beautiful, historic churches in inner-city neighbourhoods throughout the US, including St. Stanislaus Bishop and Martyr in my hometown of Buffalo NY. Founded in 1873 by my great-great-great uncle, Fr. Jan Pitass, St. Stanislaus Church is amazing not only due to its physical beauty and historic past, but also its potential to be a cornerstone in a neighbourhood that, after decades of being mired in crime, poverty and drug-related gang violence, is gradually starting to reawaken.

What is stopping this potential from being realized? The answers lie beyond the scope of this post. There are divisions in the congregation. There were rumours about unsavory financial doings on the part of previous pastors – rumours that, though not corroborated by evidence, have led many to mistrust the church’s leadership. There is a tendency of people to get set in their ways, unwilling to invest time and effort into starting new initiatives that might attract a younger, more diverse congregation. There is nostalgia for the past, which makes it hard for people to respond to the changing needs of the community. And, unfortunately, there is apathy. “Young people don’t want to come here…We’ve tried x ideas, and it never worked…Who knows if this place will even be open next year?”

Too many times I’ve heard these expressions of futility and defeatism with regard to my home parish’s future – a resignation that our pastor, who is only assigned to our parish for three years, recently told us we need to resist. “It is up to you,” he exhorted us. “What motive does the diocese have to give you a priest if your community is divided?” This was just the message we needed to hear, and it is the message I am eager to share with you. The future of any church – and indeed, of the Church as a whole– does not lie in the hands of priests (though they are of course indispensable). The future of our country does not lie in the hands of Trump or Clinton or whatever candidate ends up being sworn into office in one year’s time. The future lies in our hands.

All of us get discouraged. All of us get struck by the feeling, “What can one person possibly do?” A few years ago, I was so mired in apathy that I even wrote a poem about it:

I was not in a good place when I wrote that piece, and unfortunately, that kind of discouragement has a way of finding me on quite a regular basis. However, I am happy to say that, about a month after writing this, I did participate in a zumba-yoga charity event. Nine months after writing it, I did go on a solidarity delegation to Nicaragua with School of the Americas Watch. Fifteen months afterwards, I devoted about 40 hours to learning a Chopin piece (the C# minor waltz, not the Revolutionary Etude – that one’s still on my bucket list) – and played it at a small charity event. And nowadays I’m glad to write letters in support of other people’s causes, as long as I sympathize with the cause and have the time.

We cannot permit an apathetic or bleak attitude to take control of us. This is the mentality that allows politics to be dominated by big money and inner-city neighbourhoods to crumble with barely any notice from the outside; this is the attitude that will prevent us from striving to feed, house and clothe one another while protecting the planet – our only home – for future generations. At the close of this week of prayer for unity among Christians, I urge all of us to work for peace through justice, to create beauty, and to glorify God in the best way we know how.

January 23, 2016
The Thomas Aquinas Rules of Online Etiquette
Next Post

Yes, It's About the White Supremacy
suspended in her jar
Related posts from Vox Nova