Holding Your Nose: How to Vote Like a Catholic

This November, American Catholics will participate in an event of historical, even cosmic, proportions, an event that, though it shows up in our calendars with predictable regularity, is arguably more important to Americans this year than ever before. If approached with a well-formed and thoroughly Catholic perspective it has the potential to alter the fate, not only of the United States, but of the world, and not only of government and politics, but of individual eternal souls. I am talking, of course, about . . . the liturgical Feast of Christ the King, celebrated on the last Sunday of ordinary time, November 22, 2020.

The Feast of Christ the King was promulgated by Pope Pius XI in 1925, at a time when political extremism and nationalism were threatening Europe and partisans of both left and right were each offering a kind of secular salvation, often a salvation from partisans on the other side. Sound familiar? In this context, the Church felt it opportune to remind the faithful that no political system, party, or candidate will bring about the Kingdom of God, and that Catholics need to be ever wary of the totalizing claims of politics.

It has always been a temptation to seek salvation by political means. Indeed, for most of history, politics and religion have not even been recognizably separate entities. When St. Paul taught the early Christians to say, “Christ is Lord,” he was subversively co-opting a maxim common in the Roman Empire at the time, namely, “Caesar is Lord.” To acknowledge Christ as Lord is to relativize the claims of politics on our lives. God is in charge, and no matter who is elected on November 3, we will celebrate Christ the King on November 22 . . . 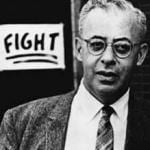 October 9, 2020 Saul Alinsky and Catholic Social Teaching
Recent Comments
0 | Leave a Comment
"Oh dear stars these translated words.....dont make any sense aaaaaaa thanks for translating.ZH.G1269.US/c5119Y"
Spirit1299 If Christ is our only King
"Barely a man but already super smooth. Hikan could never. 😆y.2632F.US/R5119O"
Mark Bird This is Why We Founded Vox ..."
"The best book in the world👇🏻👇🏻PA.SWORDGIPHY.COM/t5119d"
szmtex Can one be a homeowner and ..."
"✅Since our project is here without our consent, I would like to promote our official ..."
HavenCustos A Reflection for a Rite of ..."
Browse Our Archives
Related posts from Vox Nova

Catholic
January 17-24, 2021: A Week of Nonviolence for...
Vox Nova
TRENDING AT PATHEOS Catholic