In season 3 of The Good Place, the protagonists discover that no one has actually made it to the good place in roughly 500 years. Initially suspicious that the demons of the bad place have rigged the system, our heroes eventually find the explanation for the problem is actually much less perfidious, though no more comforting. The modern world, it seems, has become so morally complex that virtually every action is morally compromised.

While a medieval European peasant could eat a vegetable without any moral qualms, her modern counterpart doing the same seemingly benign act is caught in a moral web well beyond her own capacity to calculate or even imagine: Where did the seeds come from? Were the workers who planted, tended, and harvested the produce treated justly? What is the carbon footprint of transportation and refrigeration? Does the supermarket chain that sold it provide financial or moral support to unethical causes?

The conceit of the show is the often hilarious, if thoroughly un-Christian, notion that one gets to the good place by achieving a certain point total over the course of one’s earthly life and that every action gains or loses one points. And so, while the medieval peasant might get 20 points for eating a carrot, the modern person ends up losing thousands of points for the same action. A person familiar with Catholic teaching about cooperation with evil could be excused for wanting to shout at their screen: “We know how to do this, people!”

The brilliance of the TV show’s dilemma, however, is that we feel instinctively both that it is wrong to cooperate with evil and that it is profoundly unfair to be judged so harshly for matters over which one has so little control, or even knowledge. What is one to do?

A common knee-jerk response is to suggest that it is simply never morally licit to cooperate with evil and that any moral analysis that purports to demonstrate otherwise is simply a matter of complicity and moral laziness: in short, excuse making. This response has shown itself recently in several popular social media responses to sundry declarations by individual Catholic bishops, the USCCB, various pro-life ethics institutes, and, most recently, the Congregation for the Doctrine of the Faith that the first two vaccines out of the gate, those produced by Pfizer and Moderna, pose no real moral difficulty for Catholics.

Should we lose sleep over it? On occasion, yes. But mostly, no. Which is to say, some of these instances of cooperation with evil are not permissible, though the vast majority are.[1] How can we tell the difference? Catholic teaching on this sounds highly technical and abstract, and in a way it is, but it is also little more than a careful and precise spelling out of what most of us already intuitively understand: namely, that it is generally wrong to cooperate with evil, but that certain instances of cooperation under certain circumstances may be justified and even unavoidable.

To begin: there is, according to Catholic teaching, only one category of cooperation with evil that is ever permissible. And even that one, known as “remote material cooperation with evil,” may only be justified by proportionate reasons. If this sounds highly technical, folk wisdom encapsulates the basic premise in the idea of “the lesser of two evils.”

But the fact that remote and proximate cooperation exist on a kind of spectrum (albeit one with a clear dividing line in the middle of it) is very important. It means that acts of cooperation that are technically remote, according to the definition, can still be more or less remote relative to one another. And because remote material cooperation with evil is not necessarily justified, but must be justified by proportionate reasons, just how remote the cooperation is comes in to play. The more remote the cooperation, the lower the bar for proportionate reasons. Less remote cooperation, though still possibly justifiable, needs to clear a higher bar.

The Church’s Teaching Applied to the Pfizer and Moderna Vaccines

Which brings us to the first two vaccines which have been shown to be safe and effective in Phase 3 trials, which have received regulatory approval in an increasing number of jurisdictions, which have begun to be distributed and administered, and the use of which is considered by the overwhelming majority of Catholic ethicists and bishops to be clearly and easily justifiable. How was this assessment made?

It is emphatically not the case, as many who reject the Church’s position have falsely claimed, that Church teaching allows for vaccines that use “aborted fetal cells” in testing but not in production. Such false framing—sometimes innocently, sometimes intentionally—makes Church teaching look arbitrary and inconsistent. But, aside from the fact that terms like “aborted fetal cells” are misleading (a point to which we shall return), it must be said that, according to Church teaching, both types of vaccines constitute remote material cooperation with evil. 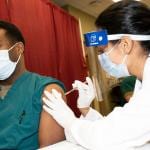 December 30, 2020
The Moral Duty to be Vaccinated Against Covid-19
Next Post

January 3, 2021 Reading Gaudium et Spes Part IV
Recent Comments
0 | Leave a Comment
"I sense the satire, but actually think there is merit to that proposal - if ..."
Jeannine P It’s More Complicated Than That
"Women can get pregnant against their will. That alone should justify giving them a way ..."
3vil5triker . It’s More Complicated Than That
"Thank you for this honest and reflective article. You gave me lots to think about. ..."
mariangreen If Christ is our only King
"Great Post, Jeannine. I, too, felt a lot of resonance."
Matt Talbot If Christ is our only King
Browse Our Archives
Related posts from Vox Nova