“Why is God doing this to us again?” (The Jersey Shore Boardwalk Fire) 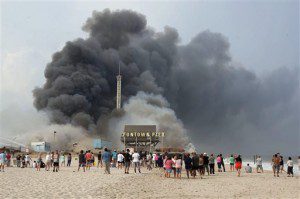 The quote you see above is the headline that appeared on the Web site of our local newspaper. As some of you know, I live on the Jersey Shore, a few miles from where Sandy hit hardest and where now a fire in Seaside Park has destroyed eight blocks of boardwalk and businesses that line the ocean.

Over the years, more times than I can count, I ate slices of pizza at Marucca’s, the very best pies on the Shore. I drank bottles of cold beer at Jack & Bills. As I child I rode the classic merry-ground at the Carousel arcade, and when my daughter was old enough I took her to ride it as well. They all stood on the boardwalk for over 50 years, survived the worst of the storm, and now are all gone, destroyed by the fire.

After Hurricane Sandy hit last year, I wrote an extended piece for the online publication Contemplative Journal. Its theme was “the spiritual legacy of Hurricane Sandy” and I looked at how spirituality, and belief in God, had survived in spite of the widespread damage to both structures and souls. Here’s an excerpt:

So where is God when disasters like Sandy strike? It’s a question that comes up time and time again, after every natural or man-caused disaster. We heard it after 9/11 and the Newtown school shootings and the bombing at the Boston Marathon. I heard it after Sandy. If God is all knowing and all powerful, where was he that day? Why did God let the storm happen in the first place?

A compelling point-of-view comes via a New York Times column by Maureen O’Dowd. In an article titled ‘‘Why God?” she asks a close family friend, Father Kevin O’Neil, about why man has to suffer. His response follows:

“I will never satisfactorily answer the question “Why?” because no matter what response I give, it will always fall short. What I do know is that an unconditionally loving presence soothes broken hearts, binds up wounds, and renews us in life. This is a gift that we can all give, particularly to the suffering…for whatever reason, God has chosen to enter the world today through others, through us.”

It’s an idea that ties into the Hindu belief that God is omnipresent, both inside of us and right in front of us. From this perspective, God can be realized here in this world in human form and can appear as anyone you encounter, whether it’s your spouse, your child, your friend, or a stranger you meet on the street.

So perhaps the answer is that after Sandy, or after any tragedy, God is there. God appears as the people who arrive on the scene to help, comfort and heal those in distress, the people who in various ways shower us with “active, engaged, fearless love.” 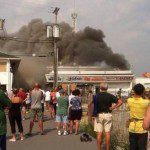 I read these words now and they ring slightly hollow. As I heard a friend say, “I feel like my childhood just went up in flames.” I think of the scores of small business owners who, after rebuilding their businesses post-Sandy, went through a dismal summer tourism season…and now face this. Tomorrow is another day, and maybe then the words above will have more meaning. 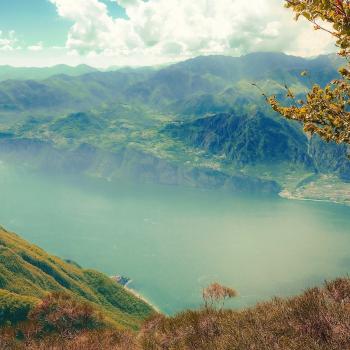