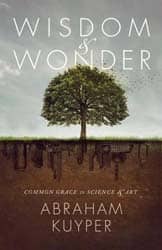 "The advantage of knowledge is that wisdom preserves the life of him who has it."

If we contrast between the life of the state and society, then science definitely belongs to the sphere of societal life. Nevertheless this does not mitigate the fact that, as far as common grace is concerned, it could not have been included in our discussions concerning society. For whatever sets in motion societal activity originates in the intimate communal living of families in the same village or hamlet, in the same region or country. By contrast, although science as well as art must find the atmosphere for flourishing within that common life in society, nevertheless both derive their impulse from something that lies outside of society, from a unique motive. For this reason, science as well as art require a separate treatment, and it is with the discussion of both of these that our exposition of common grace will conclude.

First, then, let us emphasize the independent character of science. Before everything else it must be understood that science is a matter that stands on its own and may not be encumbered with any external chains. For that reason, if in its early stages science should still lack the strength to stand on its own legs it can progress for a time being tied to the apron strings of others. Similarly, the free citizen living in the free state, who later would be keenly focused on independence, is, as a young child, initially carried by its nursemaid and learns to walk by holding on to her apron strings.

In this connection, people have shown how historically science could not have assumed its role initially without the help of the government and the church. Nevertheless, this observation supplies no proof at all against the independent character that belongs to science.

In every form of life, two stages may be distinguished. First is the stage of emergence followed by gradual growth, which continues until adulthood is reached. Only then does the second stage occur, when full-grown life is self-sufficient. This is why the gardener places a stick alongside a young plant and ties that plant to the stick. When, thanks to this support, the plant achieves full growth and is sufficiently rooted to be able to stand on its own strength, then the stick is removed and the plant stands by itself.

And that is how it went with science. At any rate, in Northern Europe, science was planted and initially supported by the Christian church. Furthermore, science could have not survived without the support of the government. Nowadays, by contrast, science has become independent to the extent that it would far rather attempt to dominate church and state than continue being submissive to the domination of church and state. This independence belongs to science, and is not at all being usurped by science.

Science has not demanded such independence in overconfidence, but possesses this independence by divine design. So much so, that science neglects its divine calling if she permits herself again to become a servant of the state or the church. Science is not a branch growing from the trunk of government service, and even less a branch that grows from the root of the church. Science possesses its own root, and science rests on this root. From this trunk that proceeds from this unique root, science must grow its branches and bear its fruit. As the well-known synodical report expressed it with such complete accuracy, science is "a unique creature of God," with its own principle of life, created to develop in conformity with that principle of life, that is, to develop in freedom.

From this we can already observe that science belongs to the creation. Just think: if our human life had developed in its paradise situation, apart from sin, then science would have existed there just as it exists now, even though its development would obviously have been entirely different. Even though its character underwent a remarkable alteration as a consequence of sin, it may never be said that like the state and the church, science arose because of sin and thus from an intervening grace.

Without sin there would be no state, and apart from sin there would have been no Christian church, but there would have been science. To that extent, science is on the same level as marriage and family, both of which similarly have undergone significant alterations as a result of sin. But both of these, had sin never occurred, would have retained their independent existence even now, because they existed already in paradise. So, just as marriage and family can hardly be said to owe their existence to the state or to the church, similarly science may not be construed as being dependent on either one of these. Science, too, arises from creation, and as such has received from the Creator a calling independent of the state and the church.