Intersections of Faith Journeys: A Q&A with Barbara Falconer Newhall

Journalist Barbara Falconer Newhall has immersed herself in the stories of faith journeys from a vast variety of traditions, from Buddhist to Catholic, from Pagan to Hindu to Muslim to Evangelical. Throughout her encounters, told as stories of faith and experience, Barbara has found something of God's presence haunting her as she explores.

First of all, Barbara, why did you choose this title? Do you feel like you have been "wrestling with God"?

Yes, I've been wrestling with God for most of my adult life. By that I mean I've been making a lot of demands of God: Who are you? What are you like? Do I matter? Are you even there? Show your face, please!

I have sorely missed the simple but powerful faith in God as expressed in the life of Jesus that I had as a girl and as a teenager growing up in Presbyterian churches—a faith that crumbled when I was exposed to the super rational Enlightenment ideals that prevailed, and probably still prevail, on the campus of the University of Michigan when I was an undergraduate there.

Your first chapter is called "Losing God," and Gallup polls seem to indicate a lot of people have been doing just that? Why do you think that is? 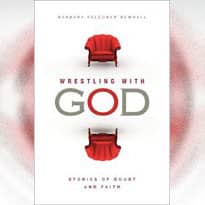 Some people want to assert that the United States is a Christian nation. It's true that the overwhelming majority of Americans are either Christian or come from a traditionally Christian family. But 18th-century Enlightenment ideas have existed alongside the Christian tradition in America from the get-go, and they continue to have a powerful influence on Americans' thinking to this day.

Most Americans, without giving it much thought, accept the Enlightenment ideas of science as a basis for knowledge, of individual human rights, of social progress and, underpinning it all, reason. For a lot of people, the Bible and the doctrines of the church, because they can't be proven rationally, must be rejected.

Unfortunately, there's a lot of black-and-white thinking going on out there. Either the Christian (or Jewish, or Muslim) story is true and must be believed, hook, line and sinker. Or it's not true and you must, therefore, be an atheist or agnostic and live as if there were no God.

I'm an advocate of finding a place for oneself in that uncomfortable gray area between certitude and total disbelief. Interestingly, a lot of Americans are doing just that these days. The 20 percent of Americans who say "none" when asked their religion often go on to say that they believe in "something," but they're not at all sure what that "something" is.

What conclusions have you come to about the great diversity of spiritual convictions and practices? How can we develop greater respect for each other and still keep our own beliefs?

I like what Seyyed Hossein Nasr, professor of Islamic studies at George Washington University, has to say on this question. Every religion has a form, he says. No two religions have the same form. "But there is only one Center. There is only one Ultimate Reality. The lines of all religions converge at only one point."

Unfortunately, religion, like language, tends to be a signifier of one's tribe or nation, so religion gets mixed into the existing us-vs.-them power struggles. To remedy that, people need to do what I did—sit down and talk with people whose point of view differs. Share some stories. Do some singing and talking and laughing. See what happens.

There aren't many people out there who have had the opportunity to do what you've done, as told in this book: listen to the faith stories of people from all walks of life and spiritual convictions. How did these conversations intersect with your own faith journey?

God—or Spirit—did show its face in the course of all those interviews. No matter who I was sitting with—a Hindu, a Native American, or a Witch—Spirit was present.

Jesus said, "Where two or three are gathered together in my name, there am I." It was like that with these conversations. There I'd be, talking with a Hindu or a Jew, and I would feel God's presence. So, after a while, I stopped looking for and waiting for that thunderbolt of certitude. Instead I thought, this is me. This is where I'm supposed to be, listening to these stories, retelling them, letting God speak through them.

What surprised you the most in these interviews?

What surprised me was how willing and able some people are to talk about their deepest feelings and experiences of the divine. I personally have always found it difficult to talk about, let alone write publicly about, my yearnings for God.