Now Featured in the Patheos Book Club
Malestrom: Manhood Swept Into The Currents Of A Changing World
By Carolyn Custis James

Carolyn Custis James (M.A., Biblical Studies) thinks deeply about what it means to be a female follower of Jesus in a postmodern world. Carolyn is president WhitbyForum, a ministry dedicated to addressing the deeper needs which confront both women and men as they endeavor to extend God's kingdom together in a messy and complicated world. 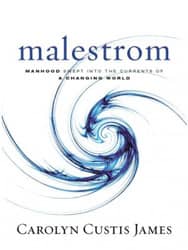 Carolyn's latest book, Malestrom: Manhood Swept into the Currents of a Changing World (Zondervan, June 2015), builds on and expands her previous books by exploring the idea of manhood and offering a revolutionary global vision for men. Carolyn reveals how Western culture's narrow definitions of manhood and the oppressive patriarchy of the Old Testament are challenged by God's original vision for men. Her book points to God's original vision for men, which calls for and empowers a Blessed Alliance between men and women.

—When Life and Beliefs Collide: How Knowing God Makes a Difference (Zondervan, 2001)

—Lost Women of the Bible: The Women We Thought We Knew (Zondervan, 2005)

—The Gospel of Ruth: Loving God Enough to Break the Rules (Zondervan, 2008)

—Half the Church: Recapturing God's Global Vision for Women (Zondervan, 2011)

Carolyn is an adjunct professor at Biblical Theological Seminary in Pennsylvania. She blogs at www.whitbyforum.com and Huffington Post/Religion, and also serves as a consulting editor for Zondervan's Exegetical Commentary Series on the New Testament as well as a contributing editor for Leadership Journal.

Carolyn travels extensively both in the US and abroad as a speaker for churches, conferences, colleges, theological seminaries, and other Christian organizations. A pastor's daughter, Carolyn grew up in Portland, Oregon. During the years between seminary and her present ministries, she had her own business as a computer software developer in Oxford, England. Today, as a cancer survivor, she is grateful to be alive and determined to address the issues that matter most. Carolyn and her husband live in Sellersville, Pennsylvania.