Spirituality and the Awakening Self: Read An Excerpt 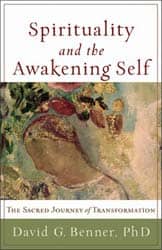 Patheos Book Club
Spirituality and the Awakening Self
The Sacred Journey of Transformation
By David G. Benner

Many things keep us content with our small selves and block us from becoming all we can be. None, however, is more important than the fact that most of us go through life as sleepwalkers and, even after a moment of awakening, tend to quickly drift off once again into a sleep of self-preoccupied oblivion and of a mindless robot shuffling through a somnambulistic fog. This is the reason spiritual teachers have always taught the importance of awareness. Hasidic Jews tell a story of a young man who approached Reb Yerachmiel ben Yisrael one afternoon. "Rebbe," the young man asked with great seriousness, "what is the way to God?" The rebbe looked up from his work and answered: "There is no way to God, for God is not other than here and now. The truth you seek is not hidden from you; you simply do not notice it. It is here for you if you will only awake."

This is the truth that has been proclaimed by all the great Christian mystics across Christian history. And it is the truth taught from cover to cover of the Bible. In his Areopagus sermon, Paul declares that God "is not far from any of us, since it is in him that we live and move and exist" (Acts 17:27-28). God is closer than our next breath.

Job even reminds us that not only is God the source of each breath, but each breath also is God's breath (Job 27:3). How much more intimate could our relationship with God be? God is not absent. It is we who fail to notice divine presence. It's all a matter of awareness.

Jesus also often urged his followers to awaken from their stupor and be attentive (Matt. 25:13; Luke 12:37). And he used the most dramatic of all possible metaphors to describe this ascent from unconsciousness. He described it as being "born again" (John 3:3-8 KJV).

All of us know something of the desire to wake up in the morning and be able to start the new day as a new person. We want to believe in the possibility of change—real change. We want a fresh start for our personal lives, and many wish it were possible for our communities, nations, the world, and the cosmos.

Saul undoubtedly started the day that was to be his fresh start without any idea of what awaited him as he headed off for Damascus. As the story is told in the Acts of the Apostles (Acts 9:1-19), Saul was a well-known and particularly aggressive persecutor of first-century Christians. The account of his spiritual awakening is immediately preceded by reference to his supportive presence at the stoning of Stephen, a Christian whose dedication to Jesus matched the opposition of Saul. Christians were living in fear of this man, who was famous for his hatred of them. What happened next was, therefore, as much a surprise to others as it was to Saul.

The details of the story are quite simple and straightforward. On the day in question, while going to Damascus to pick up authorization from the high priest for further arrests of any Christians he could find, Saul suddenly and inexplicably found himself surrounded by a heavenly light. Blinded, he fell to the ground. He then heard a voice addressing him, "Saul, Saul, why are you persecuting me?" Asking who addressed him, the voice answered: "I am Jesus, and you are persecuting me. Get up now and go into the city, and you will be told what you have to do." Saul did just as he was told. He got up—still seeing nothing—and allowed himself to be led to Damascus by hand. There he waited for three days, eating and drinking nothing and still blind, until Ananias came to him and said, "Brother Saul, I have been sent by the Lord Jesus, who appeared to you on your way here so that you might recover your sight and be filled with the Holy Spirit." Immediately, as though scales fell away from his eyes, he could see.

In that moment Saul ceased to exist and a new man, Paul, was born. The new man was as radically committed to the promotion of the church as the old man had once been committed to its destruction. The man who had come to the city to arrest Christians was transformed into a man who was to spend the rest of his life as the early church's most tireless and fearless advocate.

I have worked on the reduction of ethnic hatred in the war zones associated with the collapse of the former Yugoslavia and know how difficult it is to make even small dents in entrenched patterns of prejudice and hostility, especially once they become established parts of identity. But this was no small dent. This was a dramatic re-formation of attitudes, values, character, and behavior. Obviously Saul needed a new name to accommodate the magnitude of these changes. He was a new man. Nothing less than the metaphor of being born again could adequately describe the significance of Saul's awakening.