About Gay and Catholic

In this first book from an openly lesbian and celibate Catholic, widely published writer and blogger Eve Tushnet recounts her spiritual and intellectual journey from liberal atheism to faithful Catholicism and shows how gay Catholics can love and be loved while adhering to Church teaching.

Eve Tushnet was among the unlikeliest of converts. The only child of two atheist academics, Tushnet was a typical Yale undergraduate until the day she went out to poke fun at a gathering of philosophical debaters, who happened also to be Catholic. Instead of enjoying mocking what she termed the "zoo animals," she found herself engaged in intellectual conversation with them and, in a move that surprised even her, she soon converted to Catholicism.

Already self-identifying as a lesbian, Tushnet searched for a third way in the seeming two-option system available to gay Catholics: reject Church teaching on homosexuality or reject the truth of your sexuality. Gay and Catholic: Accepting My Sexuality, Finding Community, Living My Faith is the fruit of Tushnet's searching: what she learned in studying Christian history and theology and her articulation of how gay Catholics can pour their love and need for connection into friendships, community, service, and artistic creation. 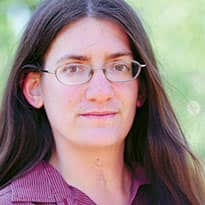 Eve Tushnet lives in Washington, DC, where she was raised somewhere between atheism and Reform Judaism. She cofounded her high school's gay/straight alliance and entered the Catholic Church in 1998, during her sophomore year at Yale University. She is a freelance writer and a recovering alcoholic. In 2010, she was profiled in the New York Times's "Beliefs" column.

Tushnet blogs regularly at The American Conservative and Patheos. Her work has been published by the Atlantic, Weekly Standard, Commonweal, and First Things, and she has written for the Washington Post's "On Faith" blog and the New York Times' "Room for Debate." She has spoken on being gay and Catholic at Carnegie-Mellon University, Georgetown University, Princeton University, Fordham, among others. She has also addressed a group of campus ministers in the Diocese of Pittsburgh and spoken with Interfaith Voices, a syndicated public radio show. Tushnet contributed an essay on gay Catholic life to the 2008 anthology Faith at the Edge, and has essays forthcoming in books from Fordham University Press and Notre Dame University Press.