"Frederic C. Rich's book, Christian Nation: A Novel is a thought-provoking futuristic look at what the evangelicals and their Republican Party enablers might envision for America's future."
—D. Leslie Schreiber of Bacon's Rebellion

"[W]ell written and persuasive...It does achieve its intended purpose by demonstrating how a theocratic government could arise in this country. It has an imaginative plot of a seriously conspiratorial nature. For those who might enjoy a work that entwines political, legal and religious themes, "Christian Nation" is a worthwhile read."
—Pittsburgh Post-Gazette

"[A] wonderful book...wonderfully cinematic, I'd love to see it as a TV series. I highly recommend it."
—Erroll Louis, "NY1″

"This riveting novel should join Sinclair Lewis's It Can't Happen Here as an American classic. Rich uses actual proposed and enacted laws to build his fictitious account of 21st century America's descent into theocracy. As Rich so vividly shows, our present politics could lead to his dystopian Christian Nation unless all who cherish freedom redouble their commitment to tolerance and democracy. Please, read this book and then pass it on to six other people, making it into a chain letter for liberty."
—Nadine Strossen, Former President, American Civil Liberties Union

"Though McCain did not win the 2008 election, in recent years controversial actions like drone strikes, invasions of privacy and unlawful detainment have been condoned in part due to greater worries over terrorism. So it's not for us to say, 'It can't happen here.' This disturbing book argues that much of it already has."
—Book Page

"In 2029, Greg sits at a simple typewriter, the last vestige of technology not under the government's watchful eyes, to record the series of events that led to the creation of an American theocracy. The systematic transformation is forbidding in its plausibility as each step toward authoritarian rule is heavily documented by Rich's expert legal explanations. The story is given a note of warmth by threads of heroism and friendship. Read as a cautionary tale or a terrifying what-if, this dystopian alternate reality makes riveting, provocative reading."
—Booklist

"Could a Sarah Palin presidency spark a faith-based civil war in America? You betcha, according to Rich's debut novel...[Rich] shrewdly shows how a few legal measures, a bad recession and a terrorist attack can unravel the liberties many take for granted. In that regard, it's an inheritor to Sinclair Lewis' 1935 novel, It Can't Happen Here...Dystopian, wonkish fun for the Maddow set."
—Kirkus Reviews

"Rich's Christian Nation is more than a 'what if'—as the 'theocratic program' unfolds our usual 'So what?' regarding fundamentalism of any variety becomes the real danger. Pay attention. What's at stake is the heart and soul of American democracy. Philosopher and lawyer Rich has it right: we were not founded as a Christian Nation, but fundamentalists ready to take on anything secular and progressive see us as the enemy who deserve to be vanquished."
—The Very Reverend Dr. James A. Kowalski, Dean, The Cathedral Church of Saint John the Divine

"While others have provided academic and political analysis of some of the dangers at the intersections of religion and politics in America, Mr. Rich's narrative brings these issues into relational and personal view. His is a compelling and timely parable for our time."
—Rev. Dr. Robert Allan Hill, Professor, New Testament and Pastoral Theology, Boston University

"The scariest thing about Christian Nation is that it's so plausible. No violent revolution, no blood in the streets, is necessary for Americans to lose their freedoms—just a failure to defend the liberties that we often take for granted. As Frederic Rich reminds us in this chilling tale, the Religious Right has said what they will do. It's up to us to make sure they don't ever get the chance to do it. Remember, it CAN happen here."
—The Rev. Barry W. Lynn, Executive Director, Americans United for Separation of Church and State 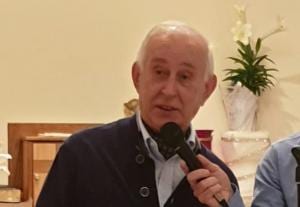 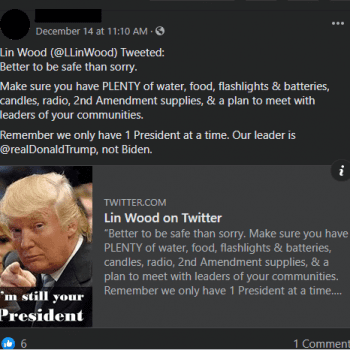 Tucker Carlson Is Not Happy About Joe Biden’s ‘War On White Supremacists’
Michael Stone
Get Patheos Newsletters
Get the latest from Patheos by signing up for our newsletters. Try our 3 most popular, or select from our huge collection of unique and thought-provoking newsletters.
From time to time you will also receive Special Offers from our partners that help us make this content free for you. You can opt out of these offers at any time.
see our full list of newsletters
Editor's picks See all columnists