Remembering Our Loved Ones, One Sense at a Time

In his book God and You, Jesuit priest William Barry defines prayer as "a conscious relationship with God." It's an eye-opening and inviting definition. I've found that an effective way to build this relationship is to review various moments of my life, revisiting them in the company of God, thanking God for the blessings I may not have noticed as they were happening.

And I'm finding that one of the most effective ways to review my experiences is to consider them one sense at a time.

I did this just recently, recalling my life with my grandmother, who died a few weeks ago. She was ninety-seven when she died, which is a very long life, but even that feels much too young when it comes to losing someone you love. So I sat down at my prayer desk one evening, lit a candle, and wrote down my memories of her, sense by sense.

I wrote down details of my grandma's appearance: her gray hair, her hazel eyes, the wrinkles that suited her so well. But I also recalled her red house, the periwinkle of the Spanish bluebells in her garden and the yellow of the rose wallpaper in the spare bedroom. Most poignantly, I remembered the bright green coat I was wearing the last time I saw her, a few weeks before her death. She mentioned it at least three times in the two hours I was there: "That coat looks so nice on you, Ginny." And I realized that when she was too ill to leave her house and vary her surroundings, the blessing of something vivid and colorful meant more to her than ever.

One of the hardest things for me to remember about a loved one is their voice. With time, the voices of people who have died slip quietly away; I have a hard time recalling them. But the voice of my grandmother is still relatively fresh in my memory: a little raspy, modest, welcoming, going to a higher register when she was exasperated.

Another, amusing memory also came to mind. Grandma adored animals, and she used to put a communal water dish on her front porch for any thirsty dogs or cats who happened to be passing by. I recalled how I'd be sitting in her living room and suddenly hear a loud slurp, slurp on the other side of the wall as an anonymous visitor imbibed her kindness to all creatures great and small.

Smell is often called our most evocative sense, the one most associated with memory. Grandma didn't have a signature perfume, but her neighborhood in Santa Barbara always did: a uniquely delicious mix of dirt, ocean, fog, and eucalyptus trees. When I was a child, she used a clothesline, and her sheets always picked up the fresh smell of the outdoors. And there was the fragrant honeysuckle on her fence, and the smell of the lemon tree that used to produce lemons the size of my smaller cousins' heads: these memories came back in a rush as I wrote. She loved her neighborhood and Santa Barbara and her yard; it's fitting that the smells I most associate with her are representative of all three.

Grandma would hug you hello and goodbye, but she was primarily a patter. She'd pat your shoulder approvingly, two quick pats that showed affection and recognition. I'd never consciously thought of her pats until doing this prayer exercise, and I realized that it was a kind of touch that revealed so much about my grandma: she was not outwardly demonstrative, but was always ready to let you know, in a quiet and unobtrusive way, that you were A-plus in her book. Her pats were brief but eloquent, as touch can be.

Grandma was a baker whose chocolate refrigerator cookies, Swedish coffeecakes, peach pie, and Christmas stolen were the stuff of legend. Her family was very well-fed, but others were too; every Christmas, she'd put together bags of homemade cookies for the mail carrier, the Arrowhead water delivery man, and the men who picked up the garbage. That was how Grandma said "thank you": with food. We're going to miss the treats that came out of her small kitchen.

As I did this exercise, my memories unrolled like thread from a spool, and I found myself remembering things I hadn't thought about in years. It felt good to walk through the past in God's company. I cried often, but I was primarily thankful for the blessing of Grandma's life, which has touched every one of my senses many times over.

So try it: Think of someone you love, invite God into the experience, and run through your memories sense by sense.

It's a powerful way to celebrate the person you love and to grow closer to God, who made those senses -- and their corresponding memories -- possible. 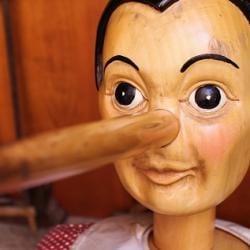 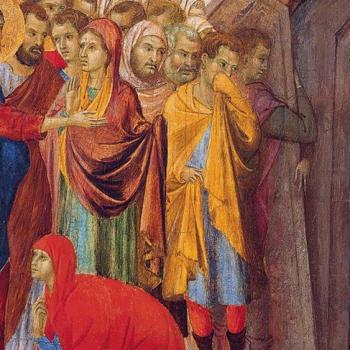 Welcome Back, Sick Pilgrims
Marybeth Bishop
Get Patheos Newsletters
Get the latest from Patheos by signing up for our newsletters. Try our 3 most popular, or select from our huge collection of unique and thought-provoking newsletters.
From time to time you will also receive Special Offers from our partners that help us make this content free for you. You can opt out of these offers at any time.
see our full list of newsletters
Editor's picks See all columnists